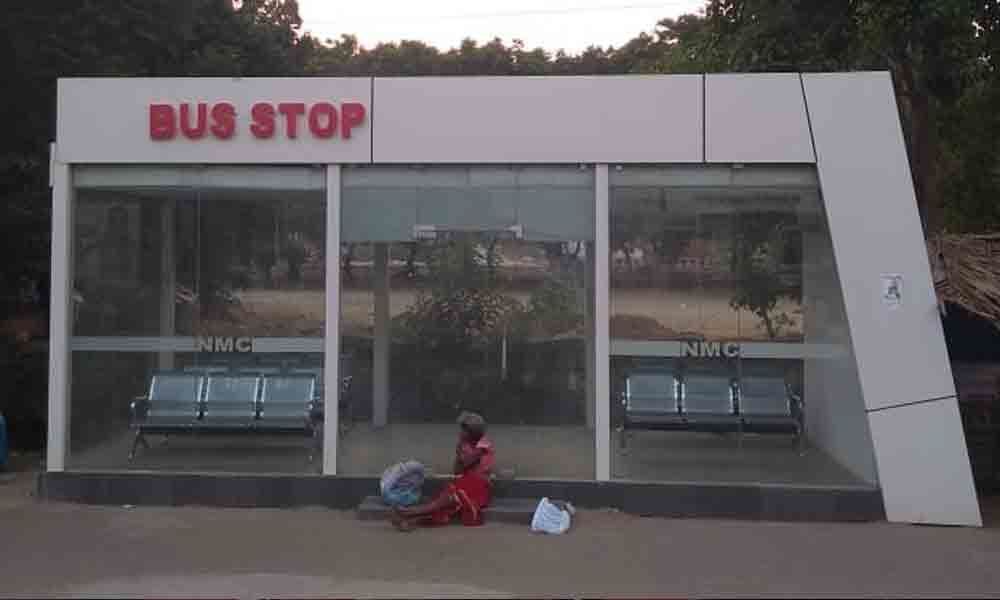 Even as peak summer days are going to an end in a short while with the onset of monsoon, still the air-conditioned bus shelters partly constructed at various parts of the city are inaccessible to the denizens.

Nellore: Even as peak summer days are going to an end in a short while with the onset of monsoon, still the air-conditioned bus shelters partly constructed at various parts of the city are inaccessible to the denizens.

Thanks to the administration and politicians, who completely neglected the safety and convenience of the people during the scorching heat conditions for completing shelters.

In fact, the Municipal Corporation of Nellore had planned to construct 10 airconditioned bus shelters in the city spending Rs 8.5 lakh for each one and the majority have been partly completed.

Meanwhile, the focus was shifted from the development works to the elections where the infrastructure has become waste which aimed to serve the people during summer.

As part of the plans, the civic body had started six such air-conditioned bus shelters at Ayyappagudi Centre, Rajarajeswari Temple area, opposite to MGM Mall, VRC area, Gandhi Statue Centre, and at some other place between Ayyappa Temple and Atmakur bus stand. There was no problem for funding sources as the officials desired to construct them under general funds of the civic body. Now, they are incomplete as air-conditioners and interior beautification has to be completed.

These swanky shelters will have facilities like free Wi-Fi, mobile charging points and a special room for women for feeding their kids and others and these centres are very crucial in the city since many old shelters in the city are in dilapidated condition.

Commuters can rely on shops and commercial complexes during summer and monsoon seasons for taking shelter. Officials also planned to extend the programme getting support from the industrial organisations and other special economic zones as part of the Corporate Social Responsibility for constructing these shelters that are more essential but there was no response from them."Cost of each air-conditioned shelter is around Rs 8.5 lakh and the Greater Hyderabad Municipal Corporation constructed such state-of-the-art shelters with only around Rs 3-4 lakh for denizen amenities. There were some basic shelters also constructed with around Rs 1-Rs 2 lakh. Why these people have planned for spending a huge amount on the shelters that give scope for misuse?" said a senior official from the Roads & Buildings department.

The official added that the GHMC has planned to construct more than 800 such shelters under the Design-Build-Operate-Finance-Transfer mode that ranges from approximately Rs 1 lakh– Rs 4 lakh. Also, they will have air-conditioning, Wi-Fi, coffee vending machine, cold beverages, mobile charging points, baby feeding, dress changing rooms, separate toilets for men and women, CCTV and an SoS button for protection from the police. There is a facility of ticket vending machine for easy access to travel, he added.