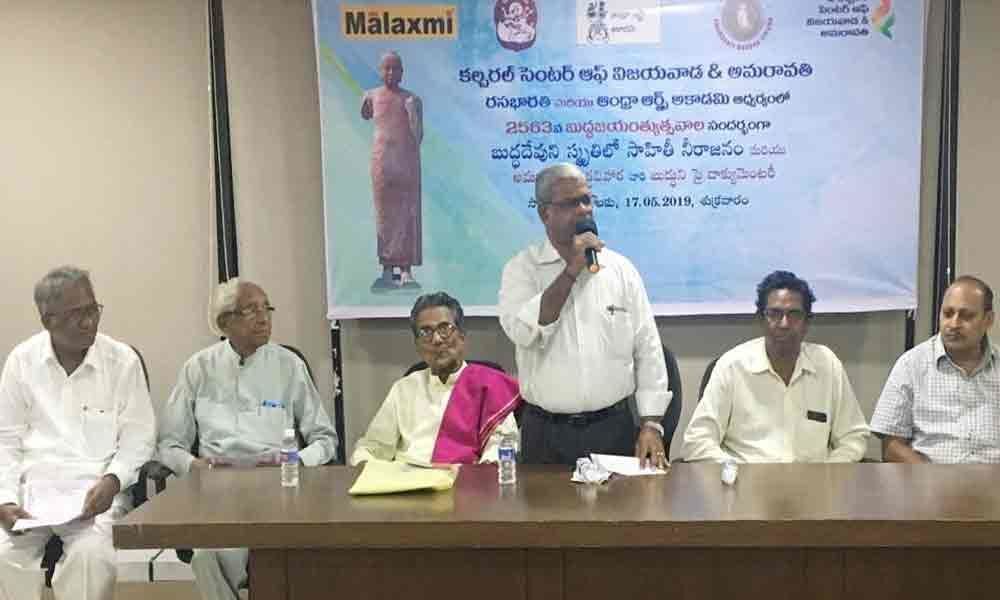 A literary Tribute was organised by the CCVA, Rasa Bharati and Andhra Arts Academy at CCVA to mark 2,563rd Buddha Jayanti Day celebrations on Friday.

Vijayawada: 'Buddhism is not a religion, but a scientific and rationalistic way of life followed by many people throughout the world' said Dr Gumma Sambasiva Rao, an eminent literary person, at a literary meeting organised in the memory of Buddha at the Cultural Centre of Vijayawada and Amaravati on Friday. A literary Tribute was organised by the CCVA, Rasa Bharati and Andhra Arts Academy at CCVA to mark 2,563rd Buddha Jayanti Day celebrations on Friday.

Speaking on the occasion, Dr Sambasiva Rao said many Telugu poets and writers were influenced by the teachings of Buddha and they wrote many poems in Telugu. Dr E Sivanagi Reddy, CEO, CCVA, spoke on the history of Buddhism in AP and explained how it flourished for many centuries. He said rich Buddhist history gained reputation in the world. J Paradesi Babu, Secretary, Rasa Bharati, spoke on the role of the women followers in Buddhism and how telugu literature portrayed them.

A documentary was presented on Buddhist sites associated with the life of the Buddha, such as Lumbini, Buddhagaya, Saranath, Sravasthi and Kusinagara by Subhakar Medasani, Secretary, Amaravati Buddha Vihara, Dr J Mahati Sankar spoke on Buddha as depicted by Karunasri Jandhyala Papayya Sastry in his literary works.