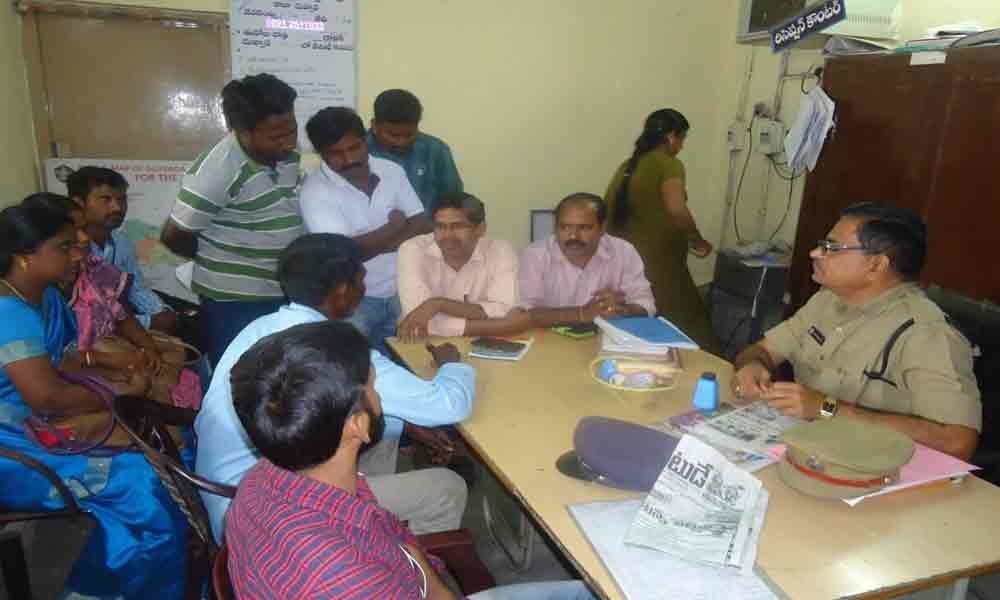 x
Officials from the Police, CRPF and Women and Child Welfare Department discussing with the parents, who tried to perform child marriage at Duvvada Police Station in Visakhapatnam city (file picture)
Highlights

Though the enforcement departments, NGOs and media are striving to prevent child marriages, the parents from the poorer sections in the State are still opting to conduct marriages to their daughters when they are still minors.

Visakhapatnam: Though the enforcement departments, NGOs and media are striving to prevent child marriages, the parents from the poorer sections in the State are still opting to conduct marriages to their daughters when they are still minors. The UNICEF (United Nations International Children's Emergency Fund) has ranked Andhra Pradesh sixth in performing child marriages while Assam stood at the first place.

Surprisingly, majority of the mothers who are pressurising and pacifying their minor daughters to get married even before they attained the age of 18, say that it has become very difficult to guard and protect their daughters and hence they are performing their marriages. Following the pressure from the parents, over 40 per cent of girls are discontinuing their education after class 10 in the rural and Agency areas.

"Our forum members across the 13 districts are working to stop the child marriages. This year in the past four months, with the support of the police, women and child welfare officials we have prevented 56 child marriages and successfully counselled the parents. Yes, there are number of child marriages being performed in the State.

During our survey and studies we found that girl children between 15 and 18 years are being influenced by the social media and misguided by the boy friends in the name of love. The parents in the rural and tribal areas are giving priority to keeping up family prestige and preferring to perform marriages of their minor daughters. About 70 per cent of the girls are getting badly affected by the social media and getting influenced by their boyfriends," said State President of Child Rights Protection Forum, Gondu Seetaram.

"Influenced by the social media, serials and movies, innocent girls are damaging their lives in the name of love. Earlier, due to poverty and lack of awareness the parents performed child marriages. But, now the parents prefer to perform child marriages as they fear that they will not be able to guard their girls from various influences," says B Saroja, a practicing advocate in the district court.