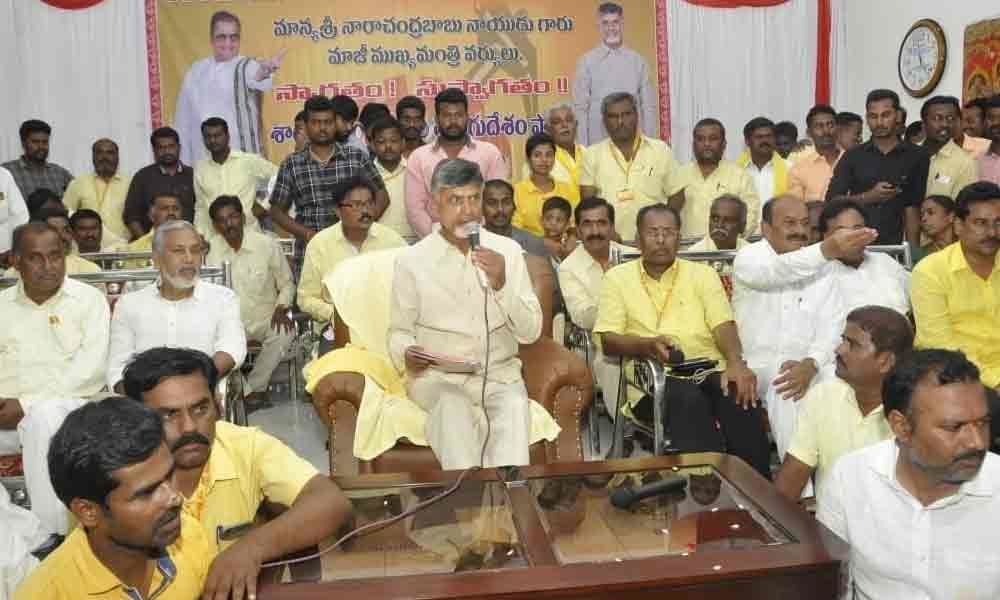 TDP President N Chandrababu Naidu has assured the people of Kuppam Assembly constituency that he will try and fight to bring Handri-Neeva Sujala Sravanthi (HNSS) water to Kuppam soon.

Tirupati: TDP President N Chandrababu Naidu has assured the people of Kuppam Assembly constituency that he will try and fight to bring Handri-Neeva Sujala Sravanthi (HNSS) water to Kuppam soon. The water already came very near to the constituency and some more work is still pending.

Now, the State government has to complete the task of bringing water to Kuppam. He said that he fulfilled the promise of providing water to Pulivendula first and brought them almost near to Kuppam.

Addressing the people of Ramakuppam and Santhipuram on the first day of his two-day tour to the constituency on Tuesday, Naidu said that he has special love and affection for Kuppam people, who elected him as their MLA for seven times even if he never came here for campaigning for which he will always be grateful to them.

The TDP chief said that he came to the constituency to thank people and reassure the commitment to move ahead with same spirit. "The people have always shown affection towards me and treated like their family member. I tried to enhance the credibility of Kuppam. This was the area who believed me for over three decades though I have not born here," he stated.

The constituency has seen much development and various other works are in progress. Infrastructure development was very much significant. One or two industries have come here, and efforts were on to bring some more. If industries come here, people of this area will get employment opportunities. At this juncture, the government has changed. Still, all efforts would be made to see that development works will not take a break, he revealed.

"I have always worked hard and developed the State to make you all proud and keep up your confidence. The constituency has witnessed several development initiatives including a medical college and an engineering college. As opposition leader, I will frequently visit the constituency and will be available for the people.

Together, we should take development forward," he stressed. At both Ramakuppam and Santhipuram, Naidu also addressed party workers separately and interacted with them. He will address public and party workers at Gudupalli and Kuppam on Wednesday and also scheduled to review the progress of development works with officials.