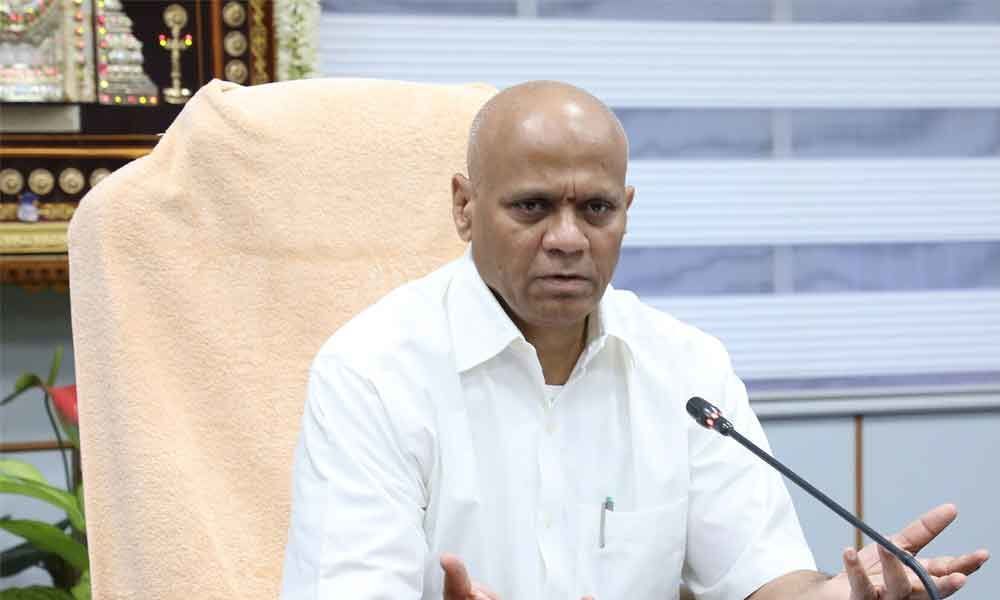 TTD Special Officer AV Dharma Reddy on Friday claimed that the scraping of the categorisation of VIP break darshan helping the TTD save about an hour or so benefiting common devotees.

Tirumala: TTD Special Officer AV Dharma Reddy on Friday claimed that the scraping of the categorisation of VIP break darshan helping the TTD save about an hour or so benefiting common devotees.

Speaking to media persons here on Friday, Dharma Reddy said the streamlining of the VIP break darshan enabled the TTD to provide darshan to about 5,000 common devotees additionally helping the TTD to ease the rush and also reducing the waiting time for darshan of Lord.

TTD Trust Board Chairman YV Subba Reddy is keen on giving priority to common pilgrims in darshan and accordingly changes have been brought in VIP break darshan by cancelling categories that consume more time, he averred.

"Even, the protocol VIPs are now given Theertham and Satari outside the sanctum inside Bangaru Vakili area as part of streamlining the VIP darshan system which has saved lot of time and today we could able to complete VIP break darshan early.

With this scraping of categories in VIP break, now almost an hour is saved and in this precious hour we could be able to provide darshan to nearly 4,500-5,000 pilgrims in addition", he observed.

Earlier, the darshan for L1 category VIPs alone used to take 1-2 hoursbut now after scrapping the category brought down to less than half an hour, he said, adding that previously due pressure L1 tickets which has to be limited to protocol VIPs given to others also resulting in break darshan consuming more time up to three hours causing delay to common devotees.

Reddy was candid enough to say that the intention of introducing categorisation was good but over the time it proved inimical to common devotees with the tickets issued to more number of people including non-protocol VIPs.

Citing the recent instant of receiving 150 applications from media, he said only 50 were found genuine. For the verification about 100, who applied as media did not turn up revealing that they were not genuine, he explained.

In this connection, Reddy said that privileged darshan is not new in the famed shrine but was in vogue since 1830 of the British Raj, according to available temple records.

As per the temple 'Dittam', the Peshkar ordained to receive the VIP (Peddamanushulu) visiting the shrine and conduct him to the sanctum sanctorum for darshan of Lord.

Answering a question on increasing middlemen working as PROs to VIP including MPs and MLAs on the hills engaged in getting ticket under VIP quota, the Special Officer sought the details of such persons to take stringent action, indicating that TTD management will be tough on those misusing tickets issued under VIPs quota.