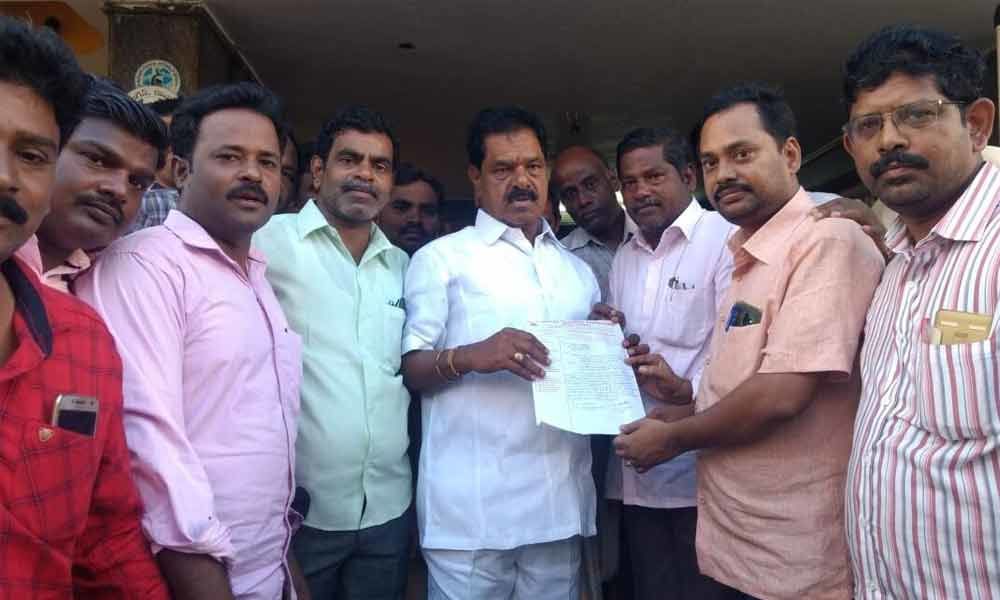 Tirupati: One of the new government's pet schemes 'Amma Vodi' has created ruckus between public and private schools. While the main objective of the scheme was to reduce the burden of educating children on parents, government teachers are crying foul that it will benefit private schools more.

The government has already clarified that it will be applicable to both government and private schools.

Academicians argue that education has become burdensome in Andhra Pradesh because of the private sector. Private schools were set up in the State without any proper control and the managements have been fleecing the parents.

Encouraging such schools with these type of schemes will further worsen the system and education will become even more burdensome. Even the people who are sending children to government schools may now look at private schools in the name of better standards as they can get Rs 15,000 which will have adverse effects on the system.

MLC and floor leader of Progressive Democratic Front in the Legislative Council Vithapu Balasubramanyam has found fault with the government that it was not looking at the problem in the right perspective.

Speaking to The Hans India, he questioned whether private people bring the 33 per cent illiterates into the education system, which the government intends to do? Only government schools can do that as majority of that percentage belongs to downtrodden sections and neglected people. Unfortunately, the government was not thinking in those lines.

He suggested that to increase literacy the only way would be encouraging government sector. For this, the allocation for education has to be raised to at least 20 per cent in the budget from the existing 13.06 per cent.

Teaching vacancies are to be filled and schools need to be modernised to see that they attract students and their parents. Other States like Kerala, Himachal Pradesh, Delhi, Rajasthan etc., were doing this besides providing incentives to those joining in public schools, he underlined.

He said that in Chittoor district 1,072 schools were having less than 20 students and once pending promotions are cleared, teachers have to move to other schools resulting in closure of at least 600 schools. Such problems are to be addressed first.

"If Amma Vodi scheme is confined to only government schools then only desired results can be achieved. Once enrolment goes up it brings pressure on teachers also to deliver which works in the right perspective," he maintained. The initial estimates reveal that Rs 4,997 crore may be required to implement the scheme through which private people will benefit in a big way.

"There is also another problem in this. Managements will try to enrol children outside the school to get Amma Vodi benefits. Actually, they will never come to school and real literacy rate will not go up. The government is not trying to do a positive consolidation," he averred.

Some teachers were of the view that there was no clarity yet on whether it applies to the number of mothers or to the number of children. Also, the amount is same for either 1st class or 10th class. "If one starts a private school and manages to enrol 200 students he can get Rs 30 lakh towards Amma Vodi scheme and can save at least Rs 15 lakh and government schools are to be closed due to lack of student enrolment," opined a government teacher.

The district president of the United Teachers Federation (UTF) K Muthyala Reddy has said that they were opposing implementation of the scheme to private schools and submitted a representation to Deputy Chief Minister K Narayana Swamy.

At a time when enrolment has been taking off well in government schools, the decision to implement Amma Vodi to private schools was dampening the spirit.