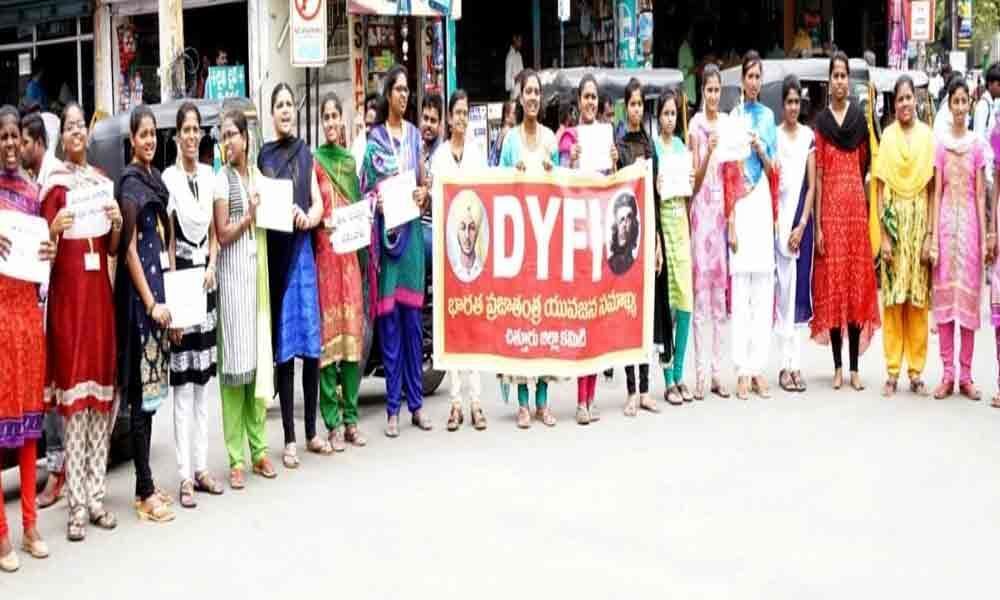 Tirupati: Democratic Youth Federation of India (DYFI) and All India Democratic Women's Association (AIDWA) strongly condemned the shocking incident of honour killing in which a upper caste young mother was done to death by her own parents for marrying a Dalit, in Palamaner mandal and demanded stern action to prevent such inhuman killing of women.

The activists holding banners took out a rally in the city before burning the effigy of 'caste demon'. Speaking on the occasion, DYFI district secretary S Jayachandra and AIDWA district vice-president Jayanthi demanded the police to arrest all those involved in the honour killing including Bhaskar Naidu, who mercilessly killed his own daughter, unable digest her marrying a Dalit and see that all them of punished.

It was horrible to note that Naidu, his wife, sons and relatives all joined together in the gruesome and inhuman act of vengeful murder, two years after the marriage and unmindful of sniffing out the life of a young woman leaving her child and husband in misery.

They said that it was the failure of the government in taking proper measures resulting in such honour killings going on unabated. Meanwhile, Deputy Chief Minister K Narayana Swamy also condemned the honour killing which he said a shame to the society. He wanted the police to immediately arrest all the accused and see that they get maximum punishment to deter people from indulging in such inhuman act.