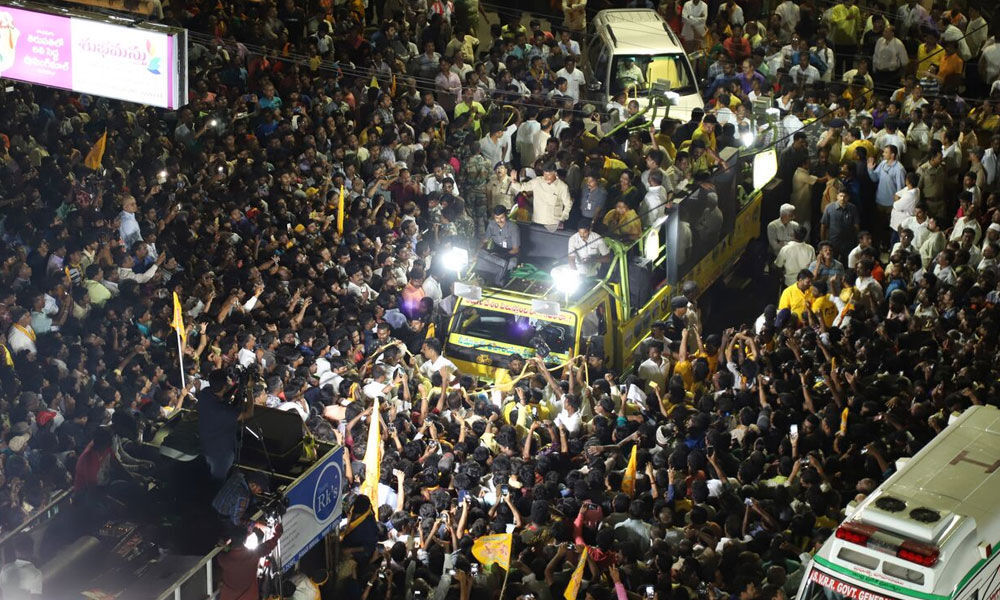 Srikalahasti/Tirupati: Raising pitch in his attack on YSR Congress Party, TDP chief and Chief Minster N Chandrababu Naidu said that the party is a B...

Srikalahasti/Tirupati: Raising pitch in his attack on YSR Congress Party, TDP chief and Chief Minster N Chandrababu Naidu said that the party is a B team of TRS and its candidates are being chosen by K Chandrashekar Rao in Hyderabad.

Addressing election meetings at Srikalahasti and Tirupati on Sunday, Naidu minced no words in attacking KCR and Jaganmohan Reddy, saying that KCR was not only involved in YSRCP candidates' selection but also provided Rs 1,000 crore to the party for its election campaign in the state.

Spitting fire on KCR, Naidu stated that he will not leave him so easily without giving him (KCR) 100 return gifts to him and said, in a high pitched voice, Kabardar KCR. He further said he will teach KCR a lesson and wanted the voters to follow suit by wiping out YSRCP in the state to send a strong message to TRS chief for insulting and slighting the five crore people of AP.

Not sparing even Prime Minister Narendra Modi, the Chief Minister said that the very existence of minorities will be at stake if Modi comes back, warning the people voting YSRCP that it would be a vote going into the account of Modi.

Harking back on Gujarat riots in 2000, Naidu said he was the first one to demand Modi's resignation as Chief Minister of Gujarat holding him responsible for killing of more than 2,000 Muslims in the communal riots following Godhra incident. Similarly, he is the one who stoutly opposed Modi on triple talak bill as it was brought by Modi only to persecute the Muslims.

To drive home his point that lives of Muslims minorities will be in danger if Modi is elected again, he said that attacks on Muslims in UP and other places are on the rise and urged Muslims to help TDP to make AP free of YSRCP.

He went on dwelling at length the initiatives his government had taken for minority welfare and also backward classes whom he said were the backbone of his party which he said given maximum seats to BC candidates to contest in the election.

Naidu said despite the Centre's non-cooperation and betrayal of Modi who, he said, let down the state, he saw the state was brought back on the road to progress and successfully completed Handri-Neeva project to bring Krishna water to Chittoor district to end the drought that perennially haunted the district.

The completion of Galeru Nagari will help irrigation and also provide drinking water through Balaji reservoir to pilgrim city of Tirupati, Naidu said while adding that the government provided Rs 100 crore to Srikalahasti development.

He said he had given ticket to Bojjala Sudhir Reddy for Srikalahasti Assembly as desired by his father and sitting MLA Bojjala Gopalakriduna Reddy and asserted that he will take care of Sudhir to become a good leader following in the footsteps of his father.