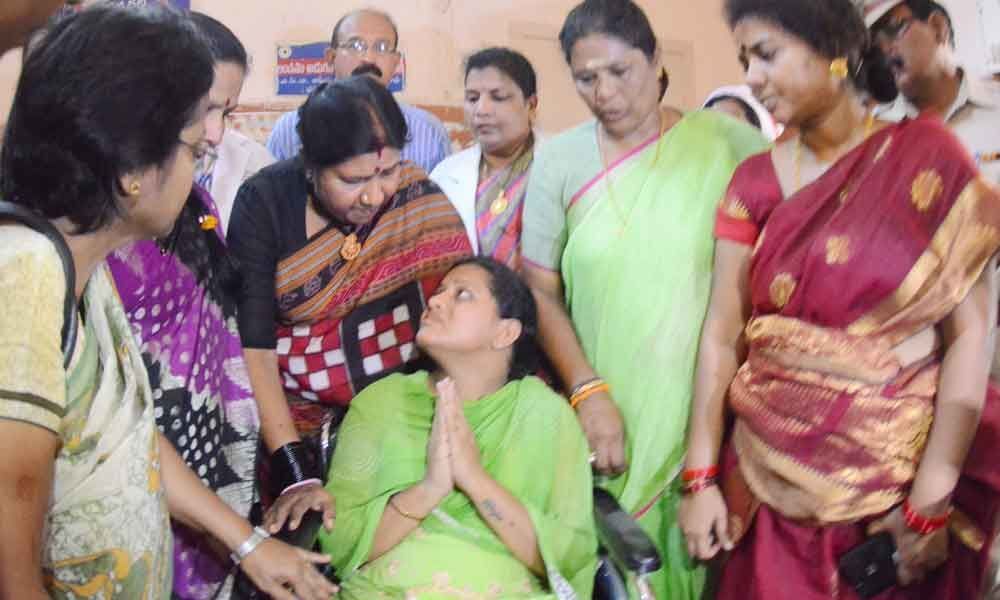 Andhra Pradesh Women’s Commission Chairperson Nannapaneni Rajakumari on Thursday condemned the attack on pregnant woman for more dowry and mysterious death of a B Tech student.

Visakhapatnam: Andhra Pradesh Women's Commission Chairperson Nannapaneni Rajakumari on Thursday condemned the attack on pregnant woman for more dowry and mysterious death of a B Tech student. The chairperson arrived in the city and called upon the pregnant woman Rajeswari, who was seriously injured after her husband and mother-in-law attacked on her for dowry. Rajakumari went to King George Hospital and enquired about the health condition of Rajeswari with the doctors.

Later, addressing the media, she said that the Commission would talk to the government to provide a job to Rajeswari and after the delivery, the commission would take care of baby also. She directed the city police to file charge sheet against her husband and in-laws and ensure stringent punishment to the accused.

She announced that the commission would take the responsibility of Rajeswari after discharging from the hospital. She called upon the advocates, police and other influenced persons in the city not to provide any sort of help to the accused. Talking about the rave party in Visakhapatnam, Rajakumari said there should be some restrictions on the beaches in the city.

Expressing serious concern over the girls habituating to alcohol and drugs, she asked the parents to take more care about the girls. The chairperson directed the police to speed up the investigation and arrest all the persons who participated in the rave party.

Later, the Chairperson went to the house of B Tech student Jyotsna's house located at Malkapuram and asked the parents about the incident. Jyotsna, a B Tech student was found dead in a flat belongs to a lecturer at Akkayyapalem. Police registered a suspicious death case in this regard and arrested one lecturer and his friend. According to reports, the accused himself called upon the police and informed that Jyotsna had committed suicide in his flat.

While talking with parents of victim, Rajakumari said that the commission would ensure all sorts of help to the family. The parents informed to the Chairperson that their daughter was murdered by the lecturer and depicting it as a suicide to escape from the case. They also informed that they are suspecting the role of police in the case. Responding on the issue, Rajakumari directed the police to complete the investigation speedily and arrest the culprits immediately.