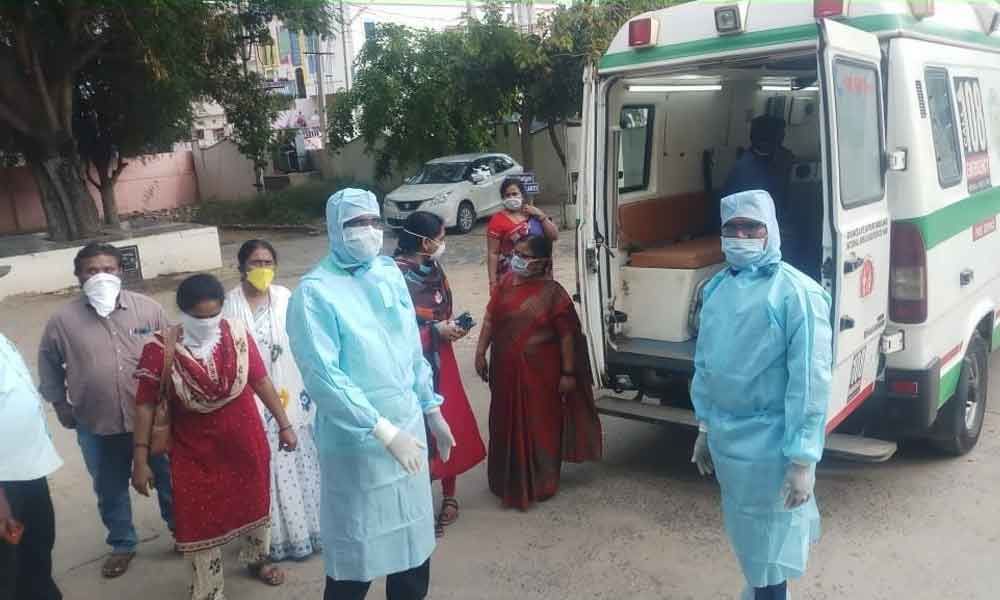 Ongole: In the time of emergency and lockdown of the country, the authorities are advising the public to stay at home and remain healthy. The general p...

Ongole: In the time of emergency and lockdown of the country, the authorities are advising the public to stay at home and remain healthy. The general public who are witnessing the services of one of the emergency services being provided round the clock, the 108 Ambulance services, are applauding their commitment and lauding their courage.

Until the first positive case was registered in the Prakasam district, the authorities and hospital staff were not serious about the precautions required to be taken to contain and control the Coronavirus. After the samples of the person put in the isolation ward were announced positive, the doctors, nurses, police personnel and other people involved in the emergency services kept a safe distance from the suspects. It is the 108 ambulance staff that went near to the suspects, explained to them about the procedure to wear the PPEs including the facial masks and gloves, and lead them to the ambulance for shifting to the isolation ward at RIMS Ongole.In fact, the 108 ambulance services are being provided by BVG India in Andhra Pradesh. The company employs the pilots and the emergency medical technicians on the outsourcing basis and their services can be put to hold at any time.

Pirla Rakesh, district manager of the 108 services in Prakasam district said that the motivation being given by the state head of BVG India, Suresh Kamle and operations head Rammohan is behind them to render the selfless services. He said that the dedicated team of EMTs Sudhakar, Gangadhar, Nagaraju, Srinivas, Suresh, and Vijay along with their pilots Srinivas, Anjaneyulu, Srikanth, Sk Masthan, D Mastan Vali and Ramabrahmam is always ready to plunge into action for the safety of the people in society.

He said that the entire team of 108 ambulances is working round the clock, though their family members are worried about their safety during the pandemic situation. He praised the services of the staff that they are the first people to go near to the suspects of Coronavirus even when the administration is advising the suspects' family members also to stay at a distance.