RSVP to offer unique courses from this year 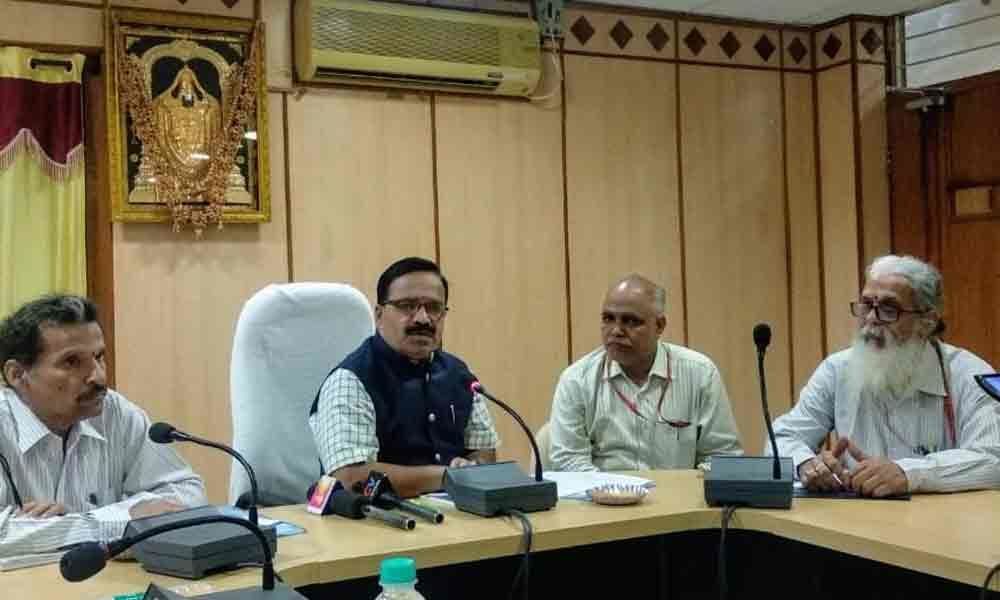 With a mission to reach out to people, Rashtriya Sanskrit Vidyapeetha (RSVP) had undertaken several initiatives, which have been yielding fruitful results.

Tirupati: With a mission to reach out to people, Rashtriya Sanskrit Vidyapeetha (RSVP) had undertaken several initiatives, which have been yielding fruitful results. For the coming academic year, Vidyapeetha has a lot more to offer in addition to what they have been doing already.

Interacting with the media on the varsity campus here on Tuesday, the Vice-Chancellor Prof V Muralidhara Sharma envisaged the plan for the whole year. The Vidyapeetha is going to start new courses for graduate students in fine arts and translation studies by launching two new departments. The V-C has said that they were planning to invite the Union Minister of Human Resource Development Dr Ramesh Pokhriyal in July second week to inaugurate the new departments.

Also, evening college will start functioning which will offer several certificate and diploma courses of one-year duration, said the V-C. Certificate programmes in Paurohitya, Temple Culture, Jyothisha and Communicative and Functional Sanskrit will be offered.

Classes will be run between 6 pm to 8 pm and with a fee of Rs 1,000. The diploma programmes will also be offered in those subjects and classes will be held from 6 pm to 9 pm with a nominal fee of Rs 2,000 for the entire course.

Prof Muralidhara Sharma also said that PG diploma courses in some subjects will also be offered. The minimum education qualification for the certificate courses will be Intermediate while for diploma and PG Diploma courses, degree holders are eligible. Interested students can apply both online and offline before June 15 for whom the classes will commence from July 2019.

The V-C further said that they will consider this academic year as 'Sanskrit Tech Year' with paperless administration, e-library and handling of classes through Information and Communication Technologies (ICT).

He said that, imbibing Sanskrit as mother of all Indian languages, the Vidyapeetha started Sanskrit Vikasa Kendra and deeply went into the minds of people of Tirupati and conducted number of spoken Sanskrit classes in and around the city. With a sense of social responsibility, the Vidyapeetha has started Yoga Therapy programme for public to help them come out of chronic diseases and it was continuing successfully for the last two years.

Also, through its Balakendra 37 centres were opened at various schools in the city in which 1,050 children have enrolled. They were taught the Indian culture and moral values. They also run "Samskrutam Nerchukundam" programme through Sri Venkateswara Bhakti Channel (SVBC) which was viewed across the world in more than 33 countries, said the V-C.

The Vidyapeetha offers combination of traditional Sastras with modern subjects like mathematics, computer science, history and so on and the unique feature is that the medium of instruction being Sanskrit. Registrar Prof GSR Krishna Murthy, Academic Dean Prof Rani Sadasiva Murthy and PRO Dr S Dakshinamurthy Sarma were also present.