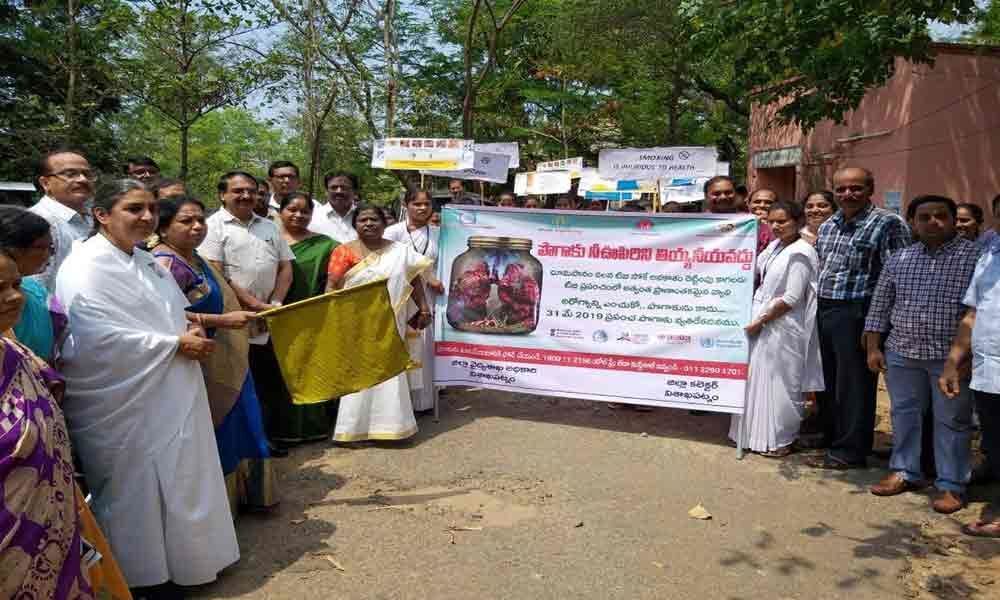 x
Representatives of Brahma Kumaris flagging off a rally organised by the District Medical and Health Department in Visakhapatnam to mark World No Tobacco Day on Friday.
Highlights

With the focus on lung health, experts outlined how tobacco related deaths are on the rise and how it continues to kill millions of people each year across the world, affecting their health adversely

Visakhapatnam: Delivering the message loud and clear, officials from the District Medical and Health Department, representatives of various organisations and voluntary associations organised rallies and awareness programmes on the occasion of 'World No Tobacco Day' observed here on Friday.

With the focus on lung health, experts outlined how tobacco related deaths are on the rise and how it continues to kill millions of people each year across the world, affecting their health adversely. Citing reasons such as reduced health risk, improved immune system and cleaner lungs, officials from the health department recommending steps to give up smoking as the chemicals present in a cigarette are known to cause cancer.

Holding banners and raising awareness among general public, the DM&HO staff took out a rally from Satyam junction to Rama Talkies. Led by District Medical and Health Officer S Tirupathi Rao, the campaign highlighted the statistics of a global survey and how Andhra Pradesh stands out in the list, recording a total of 14.2 per cent smokers. The focus is also on chewing tobacco and associated health risks in rural areas.

According to managing director of Mahatma Gandhi Cancer Hospital and Research Institute Voona Muralikrishna, 50-60 per cent of patients who are getting treatment in the hospital suffer from head and neck cancers caused due to consumption of tobacco in various forms. He recommends an integrated approach to motivate tobacco users to break the habit.

The list includes intensive advocacy drive on the negative impact of tobacco consumption, effective implementation of the ban on sale of tobacco products, periodical cancer screening programme for tobacco users followed by deaddiction programmes, among other measures.

Marking the occasion, the representatives of Brahma Kumaris organised yoga sessions at the Police Barracks grounds for the police personnel. This was followed by a free cancer screening camp wherein 75 police availed the facility.

Employees of the Mondernisation and Capital Repairs of Visakhapatnam Steel Plant along with the personnel of the other departments collectively pledged that they will not smoke or consume tobacco in any form. They also assured that they would reach out to their family members and friends and motivate them to give up smoking.

Motivating youngsters to lead a healthy life, students of GITAM Dental College and Hospital took out a rally. They highlighted the ill-effects of smoking by displaying placards that carried images and messages.