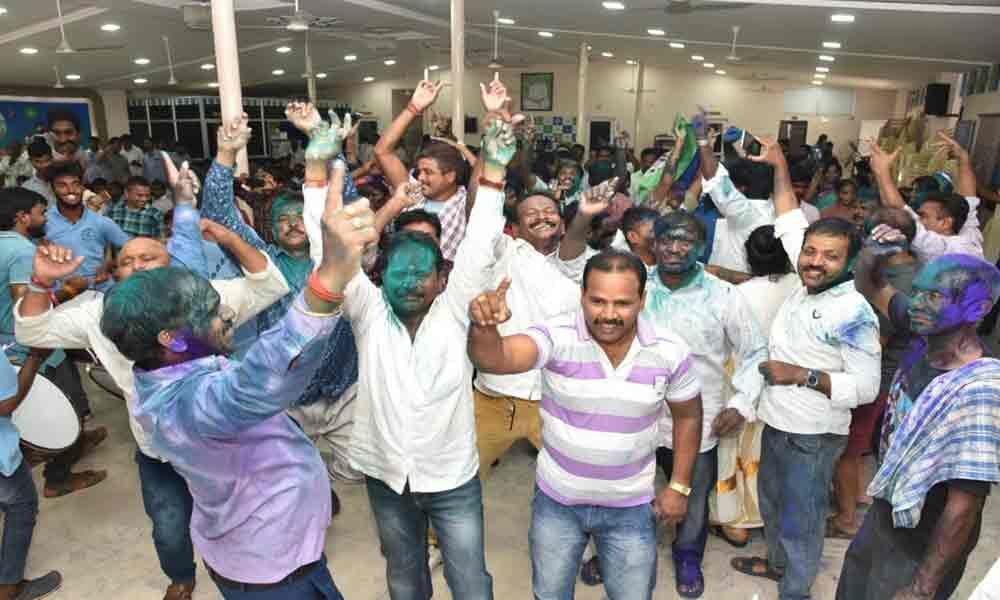 The YSRCP cadre in the district burst into a celebration mode on Thursday as the party registered a landslide victory in the State.

Visakhapatnam: The YSRCP cadre in the district burst into a celebration mode on Thursday as the party registered a landslide victory in the State. Party workers, including a large chunk of women, were seen joining the celebrations to mark the party's sweeping victory that was apparent right from the initial rounds of the counting.

The party, which could win only three seats out of 15 in the district last elections, is all set to emerge victorious in 11 constituencies this time. The party flag of YSRCP was flying high in the city as the party workers and leaders made merry distributing sweetmeats, firing crackers, dancing and smearing colours on one another.

However, the 'Jagan' wave was missing in four constituencies as four TDP MLA contestants – Velagapudi Ramakrishna Babu, Ganta Srinivasa Rao, Vasupalli Ganesh Kumar and Gana Babu hope to romp home. This may be the only solace for the TDP which received a drubbing elsewhere in the State. While Ch Ayyannapatrudu was trailing behind, Ganta Srinivasa Rao may scrape through the election. On the other hand, the BJP too celebrated the party's triumph at national-level.

Former MP K Haribabu attributed the victory of BJP to various welfare schemes and successful leadership of Narendra Modi and Amit Shah. BJP Mahila Morcha in-charge D Purandeswari said that people were vexed with the corruption-stricken TDP government which was evident in their choice of voting.

"Efforts to strengthen the party cadre from the grassroots level will continue," she added. However, a pall of gloom descended the TDP camp in the district as party leaders and workers found it hard to accept the outcome.

Speaking to media, TDP candidate for Visakhapatnam South Vasupalli Ganesh Kumar said, "Lack of support from the Centre, delay in developing Amaravati as capital city, not able to meet the expectations of people and delay in completing the Polavaram project and unfruitful move of a separate railway zone in Visakhapatnam are some of the reasons for the TDP to lose the electoral battle."