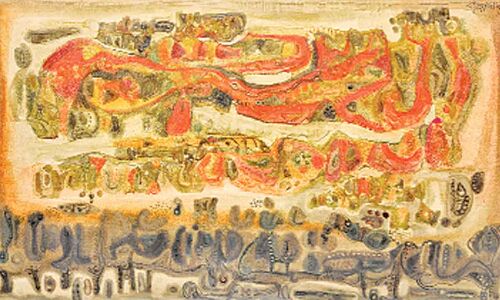 Even in a quiet season for the world of visual arts such as this one, some low-profile yet important auctions are piquing the interest of connoisseurs, achieving noteworthy prices, and assuring the fraternity that irrespective of the state of the world economy, high-quality works of art will always find discerning buyers.

Even in a quiet season for the world of visual arts such as this one, some low-profile yet important auctions are piquing the interest of connoisseurs, achieving noteworthy prices, and assuring the fraternity that irrespective of the state of the world economy, high-quality works of art will always find discerning buyers.

The most recent auction that brought spotlight on artists who are greatly respected and collected, though not superstars of the field, was the sale titled 'The Surya Collection: Property from Ute Rettberg', held by Sotheby's in London on May 31. Featuring an eclectic mélange of modern Indian art, the auction presented works by artists such as Ambadas, Devayani and Kanwal Krishna, Sohan Qadri, Himmat Shah, Badri Narayan, Surya Prakash, K Laxma Goud, Jyoti Bhatt, PT Reddy, and Laxman Pai to name a few. While these names do not have the star power commanded by MF Husain or SH Raza, they are true hotshots within the art industry and are as respected as their much-fêted peers.

An important highlight of the exhibition was The Closed Membranes of Silence, an oil on canvas by Ambadas (1922-2012) - who had dropped his surname Khobragade and preferred to be known by his first name only. This oil was painted in 1965, the year when Ambadas, a pioneering abstractionist, held his first solo show in New Delhi. According to Sotheby's, this work was acquired by Ute Rettberg from gallerist Kekoo Gandhy, starting what came to be known as the Rettberg Collection. It would eventually give rise to the Surya Galerie in Freinsheim near Frankfurt in Germany, in the German connoisseur's home. Ambadas would go on to become one of the most successful artists sold by Surya Galerie, even as he would subsequently leave India in 1972 and settle down in Oslo, Norway.

The Closed Membranes of Silence was estimated at £12,000 – £18,000 and was eventually sold for £27,720 (Rs 27.03 lakh). An abstract creation by one of India's highly individual modernists, this large work encapsulates the seed of what would come to be recognised as Ambadas' signature - flat squiggles of paint floating across a canvas in a rhythmic pattern, often evoking philosophical landscapes of his growing up years in India, and later, in colours more in tandem with the cooler climes of his adopted home.

The work under consideration is a rich tapestry of tropical colours of red, brick and green; eliciting an imagery that could be anywhere in the arid lands of Maharashtra or Gujarat.

An Untitled (Set of Three) work by Jaipur-based Himmat Shah, now 89, sold at the same price band as Ambadas'. Made of burnt paper collages on paper, this work comes from a radical, experimentative phase of Shah's career, who would eventually come to be known for his terracotta sculptures. Both Ambadas and Shah were co-founders of the Group 1890, a seminal collective led by J Swaminathan that didn't last long but left a lasting impression on the art of its 12 members.

All these works were representative of the best phase of each of these artists, all of whom had evolved a strongly individuated language of art, contributing immensely to the development of a truly modern Indian art lexicon.

What is the Surya Collection?

The Surya Collection, as mentioned above, is the collection of Surya Galerie that was started by Ute Rettberg in Germany in 1973. It was the first of its kind in Europe, dedicated to the selling of up-and-coming contemporary Indian artists.

Rettberg, one of the first women in the German diplomatic service, worked at the office of the German Consulate General and was posted in Bombay. Highly attracted to the rich colours of Indian art, she and her husband started collecting works by young, contemporary Indian artists to decorate their new home in Juhu Beach. After the couple returned to Germany, Kekoo Gandhy of the Chemould Gallery, Bombay, sent them works by Indian artists to show in their newly-founded Surya Galerie. This arrangement between the Rettbergs and Chemould Gallery lasted for two years, after which the former started sourcing art works directly from the artists.

The gallery played an important role in the expansion of knowledge of Indian art in Europe. It also enhanced the market potential of Indian art through a great selection of works by Ute Rettberg for the fifty shows she held in her gallery. She developed close friendships with several of these artists such as KK Hebbar, Devayani and Kanwal Krishna, Satish Panchal, and Surya Prakash, who, according to Sotheby's, would spend long stretches of time at the Rettberg home, painting and exhibiting their works.

Besides exhibiting the works, Ute Rettberg developed alongside a great personal collection, which has been offered at the Sotheby's auction.

The Surya Collection, as the Sotheby's auction revealed, comprised quite a chunk of modernist Tantra art works as well. That's because the Rettberg's interest in Indian art, and the founding of Surya Galerie, coincided with the birth of the neo-Tantra movement of Indian art in the mid-1960s, which reached its peak in the late-1960s and early 1970s. The artists at the forefront of this practice came to be known as neo-Tantra artists and their work as tantric art. Some neo-Tantra artists whose works were offered at the auction on May 31 included Biren De, Mahirwan Mamtani, Balkrishna Patel and Homi Patel. The works sold will carry a vital piece of modern Indian art's story to newer destinations, and perhaps, inspire the birth of newer collections, as Ambadas' work once inspired Ute Rettberg.

(The writer is a New Delhi-based journalist, editor and arts consultant. She blogs at www.archanakhareghose.com)