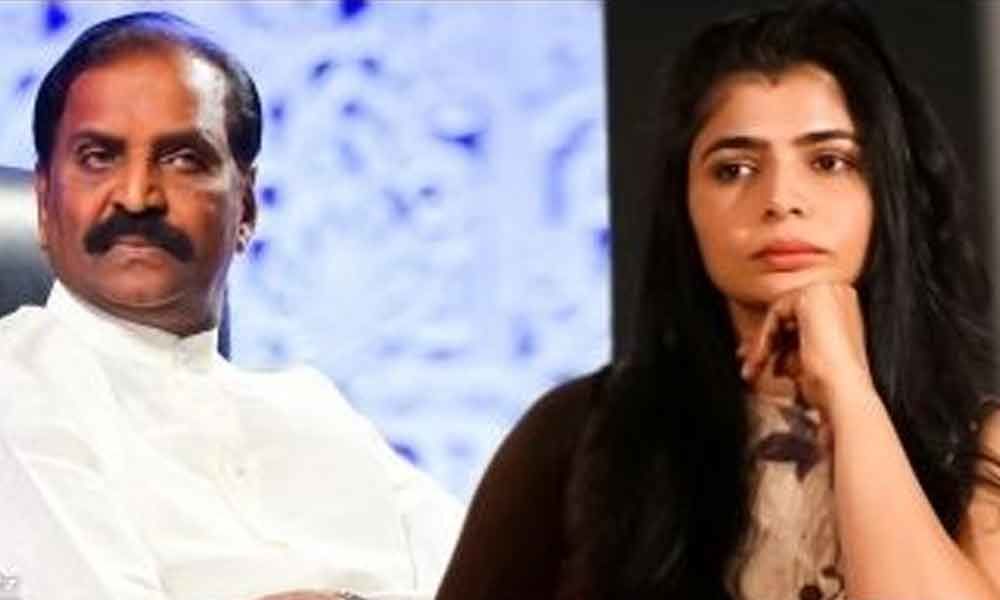 Kollywood Lyricist Vairamuthu has been chosen by SRM University for honorary doctorate.

Kollywood Lyricist Vairamuthu has been chosen by SRM University for honorary doctorate. He was to be honoured today at the convocation by other than Union minister Rajnath Singh. Tamil singer Chinmayi, who had raised her voice against Tamil novelist after nine women accused him of molestation has hit out again. The decision of the SRM University to honour a 'molester' and the defence Minister's acceptance to confer the title on a celebrity with the tainted image has peeved her no end. Taking to her social media handle, the Kollywood dubbing artiste wondered what kind of country we were living in. She also said she had lost out on project because of standing up for the cause of women.

Check out what Kollywood singer Chinmayi Sripaada has posted on her Twitter timeline...

The Defence Minister of India is conferring an honorary degree to Kavignar Vairamuthy named by 9 women so far for having molested them.

Just reiterating - outing KNOWN molesters does NO damage to them. Instead I got banned from working.

Yes, I know this doctorate is for his prowess in the language which is well established.

The way he went on, they might as well add a doctorate for being a serial molester.

Also well done, SRM. You couldn't have chosen a better example for your students on 'Role Model'

A year of repeating, Mr Vairamuthu has worked on fantastic multi star projects, traveled the world, shared the stage with biggies in politics & arts. No attempts made at investigating the complaint; No ICCs either.

Meanwhile, union defence minister Rajnath Singh has pulled out of the convocation ceremony. The latest we hear is that Rajnath decided not to be the guest chief at the event or get involved in anything controversial given the fact that there's a lot of political heat his party is already facing right now. Playing it safe, he has withdrawn from the event. The SRM University has however decided to go ahead with he grand convocation ceremony but with a new guest list in attendance. There is, however, no news on whether the University will now confer the honorary doctorate on Vairamuthu or not!