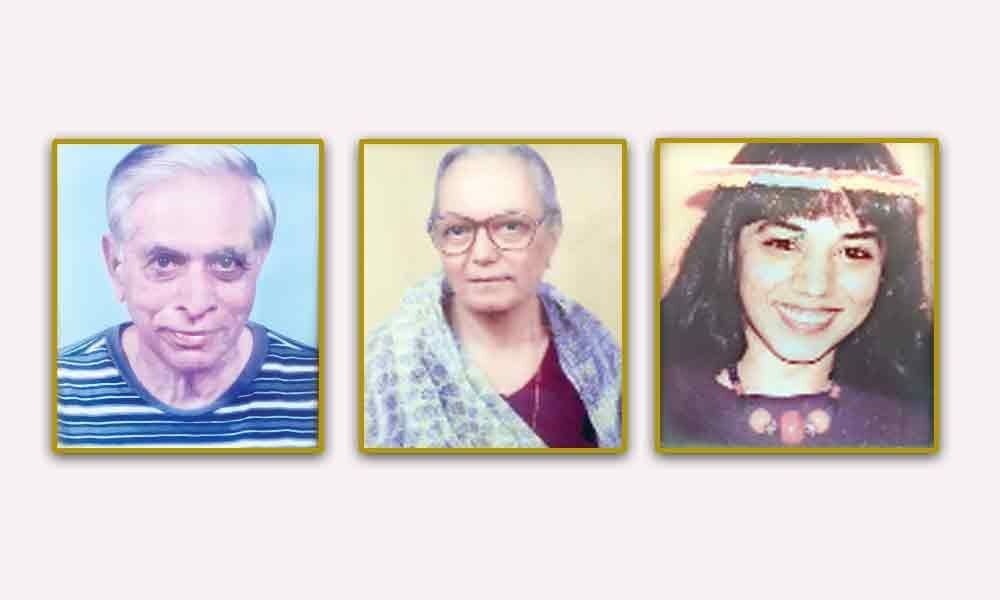 Very few people knew that a little-known Hindu-Muslim couple with roots in Hyderabad and Rajasthan state's Alwar occupied pivotal positions as scientists in Government of India organisations before and after independence. They were none other than Dr Sultana Zulfiquar Ali and Dr MS Iyengar.

Their first jobs in India were in the Council of Scientific and Industrial Research's Regional Research Laboratory, Hyderabad. Both were then posted to CSIR's Central Fuel Research Institute, Jharia (near Dhanbad) then in Bihar.

MS Iyengar was also the Director and Officer Special Duty to the Ministry of Defence during late Krishna Menon's time as Defence Minister on deputation.

On May 15 evening we had a small get-together with erstwhile Satyam Computers leader Dr Balaji Utla couple, NGO Shashi couple, his brother Ravi and Ravi's daughter Anshula, a double Post Graduate in English Literature with a PG from Massachusetts USA, in Shashi's house in Hyderabad's Srinagar Colony.

There I met an old New Delhi based friend Vinod Asad Iyengar and his wife Abha.

Though I have known Vinod who was introduced to me by late Dr AP Ranga Rao and Dr Balaji, prime architects of 108 and 104 Medical Services, for quite a long time, I did not know much about his highly interesting personal background except as an associate of Health Management and Research Institute where I worked as a consultant.

The discussion however, rotated round his illustrious family background and his family roots in Hyderabad as well as his childhood experiences in Jawaharlal Nehru's house playing with Late Sanjay Gandhi.

Vinod's mother late Smt Dr Sultana Zulfiquar Ali popularly known as Dr (Mrs) S Iyengar, belonging to the family of a Persian migrant to Hyderabad, couple of generations ago, was born and brought up in Hyderabad.

It's very interesting to know as to how many generations from Sultana Zulfiquar Ali's side have been in India! According to sources close to Vinod's family friends, her ancestors came to India during the Mughals' days. Maybe during Humayun or Akbar period.

After some fierce battle, one of Vinod's forefathers, who was in their army, was rewarded with a rather large tract of land near Alwar in a place called 'Pahari' (in today's Alwar District).

This leads to the assumption that Sultana Zulfiquar Ali's family belonged to Alwar.

Alwar located 150 kilometres south of Delhi and 150 kilometres north of Jaipur, is a city in India's National Capital Region and the administrative headquarters of Alwar District in the state of Rajasthan.

Alwar is a hub of tourism with several forts, lakes, heritage havelis and nature reserves. Pahari is a Village in Alwar District and belongs to Jaipur Division.

Syed Zulfiquar Ali family returned to Hyderabad after the British found out the King of Alwar was helping fund Congress party and forced him to abandon his army.

Maharajah Jai Singh was forced in to exile by the British - allegedly for 'misrule' in the early 1930s (in France, where he eventually died at the age of 54 in 1937).

According to Vinod, it was their euphemism for anti-colonial activities (it is said that the real reason was that the Maharajah was funding the Congress's Freedom Struggle).

Incidentally, the British replaced him with a remotely related cousin, Sir Tej Singh Prabhakar, who was a Hindu Nationalist and the President of the Akhil Bharatiya Hindu Mahasabha until 1947.

However, he was never given any real power until just before India's independence.

The ladies met on the ship to England and shared a cabin. MS Iyengar and Sultana Zulfiquar Ali fell in love in England and got married in The Hanging Gardens, Mumbai, in 1951 after they returned to India.

Around 1960, Vinod's father MS Iyengar was deputed as Director, Special Duty to the Ministry of Defence, to work under Late V. K. Krishna Menon, the then Defence Minister of India, in New Delhi.

In 1966, his father MS Iyengar was posted as Director, Regional Research Laboratory, Jorhat (Assam) and his mother Sultana Zulfiquar Ali was posted to the National Physical Laboratory, New Delhi (she retired in 1982 as NPL's Deputy Director).

Vinod was born in Lahore in Pakistan while his mother went there to spend time with her relatives. His parents named him Vinod Asad suffixing Iyengar, the family name.

While Vinod Asad Iyengar was a child of seven-eight years, he used to accompany his father when he was suddenly called to a meeting with Jawahar Lal Nehru and Krishna Menon, in late evening or early morning, and his mother happened to be out of station.

Those days Menon was almost a regular visitor to Nehru's place, he being the closest person to Nehru. A guard or peon was given the task of keeping him safe on the lawns and sometimes, they found toys to keep the boy Vinod occupied.

Vinod Iyengar has two children and named them as Radhika and Adil. His wife is Abha (who is an internationally published author and poet). His son, Adil is a practicing architect.

His daughter, Radhika, who is younger, has a Master's degree in Journalism from New York's Columbia University and is the Arts Editor with Mint Lounge - a publication of the Hindustan Times group. Both are based in New Delhi.

Vinod's sister Azra Iyengar migrated to USA and passed away long back.

He continues to stay in Delhi with his family but visits Hyderabad frequently to meet his friends and incidentally he is now attempting to find out more details about his parents'- Dr MS Iyengar and Smt Dr Sultana Zulfiquar Ali - roots and early days in Hyderabad in detail. Let us wish him all the best.