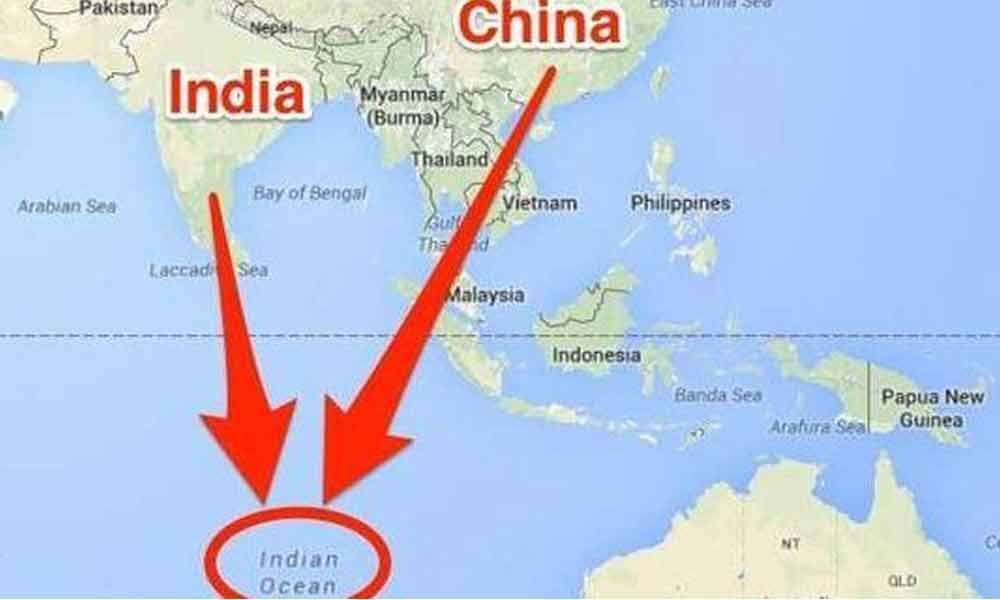 China is building a string of influence - military and political -- in the Indian Ocean region and much will depend on how India counters this assertiveness of its neighbour and demonstrates itself as a power in the maritime zone which it claims to be its own.

China is building a string of influence - military and political -- in the Indian Ocean region and much will depend on how India counters this assertiveness of its neighbour and demonstrates itself as a power in the maritime zone which it claims to be its own.

This is the crux of a new book 'The Costliest Pearl -- China's Struggle for India's Ocean', written by Bertil Lintner, an expert on the region, who has mapped how China is using the carrot and stick approach to gain influence in small countries surrounding India and those in the Indian Ocean region to expand its influence and demonstrate that it is a major power to reckon with.

The author delves in detail on how China has made inroads into various countries, including through its ambitious Belt and Road Initiative (BRI) and is building crucial infrastructure in countries like Pakistan, Myanmar, Bangladesh, Sri Lanka and Maldives.

The flexing of assertiveness by China, which only two years back established a military base in Djibouti, is also aimed at challenging the authority of the US, particularly in the Indian Ocean region.

The book talks about cold war emerging in the Indian Ocean and adds that "if an armed conflict emerges from either a 'misstep' or a more calculated provocation, it is likely to occur in the Indian Ocean where control over shipping lanes is more important than elsewhere, where divergent interests compete and overlap - and where China's ambitions for regional supremacy are the strongest".

While detailing how China has been expanding its influence in the countries in the Indian Ocean region, the book mentions that the Communist country's "investment and geopolitical power plays will determine in what direction the Indian Ocean nations and territories are headed".

The author observes: "For the British Empire, India was its prized possession. For (Chinese President) Xi (Jinping), the Indian Ocean is the pearl he wishes to secure for his growing Chinese empire - irrespective of the cost."

At the same time, the author takes note of the counter steps being taken, especially by the US, India and Japan, which even regularly hold joint Naval exercise named 'Malabar'.

Besides the close coordination among these three countries, which are wary of expanding Chinese ambitions, he also mentions that India has set up a tri-Services command in Andaman and Nicobar Islands to keep a watch on China's activities in Indian Ocean.

"China is apparently prepared to take huge risks but it could, and should, also be argued that it still has a long way to go before it can challenge the US in the Indian Ocean region," the author contends.

He notes that China has for now the military base only in Djibouti, where it has positioned about 1,000 troops, although there can be space for up to 10,000.

On the other hand, the US has Diego Garcia, a much bigger military facility, and it maintains nearly 800 small and big bases in more than 70 countries and territories across the globe, including Afghanistan, Bahrain, Qatar and Kuwait, not to mention those in Japan and South Korea.

"(But) it is the trend that is important. And the fact that China is moving into areas such as the Indian Ocean where it has had no presence for centuries," the book says.

"And everywhere the pattern is the same: loans which have to be repaid and if that cannot be done, China expects other privileges in return.

This is not traditional colonialism, but a modus operandi that leads to dependence and undermines the fiscal and therefore also the political sovereignty of the indebted nations," the author adds.

The author also asks: "And what will happen when China's military presence in the Indian Ocean region reaches a point where traditional powers such as the US and India really feel threatened?"

He says that under President Donald Trump, who assumed office in 2017, it is not only the international reputation of the United States which has weakened but also its military commitments abroad.

"It has thus fallen on India to assert its role as a regional superpower, above all in the Indian Ocean, which the Indians have long regarded as their own waters. But for India to do so, it has had to confront a new and more assertive China," he writes.

The book notes that India has begun to apply a policy similar to China's BRI which Prime Minister Narendra Modi calls SAGAR, an acronym that stands for 'Security And Growth for All in the Region' and includes helping smaller countries with infrastructure projects as well as combating piracy, smuggling and illegal fishing.

"The aim is that it will lead to closer economic cooperation between India and its neighbours in the Indian Ocean," the author points out.

"But although the Indian economy is expanding rapidly, it lags far behind China's, and SAGAR can hardly compare with the BRI. The emphasis of India's foreign policy will, therefore, be on its navy's military cooperation with like-minded countries, especially Japan and the United States," the book says.

"Much depends on India. India can access the Indian Ocean from east and west.When it comes to naval capabilities and experience, India is far ahead of China, which is only now becoming a naval power.

"But the very fact that China is now challenging India's supremacy in the Indian Ocean, has led to a drive to modernize the Indian Navy and to cooperate with others in the region... Exercise Malabar being the case in point," the author says.