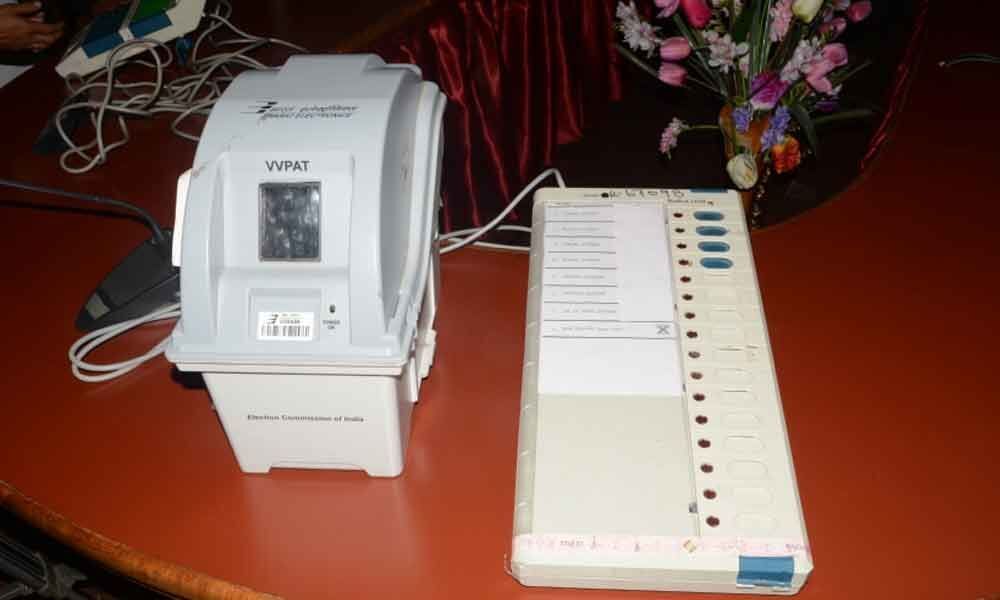 On the day of the first phase of general elections-2019 i.e. on April 11, Telugu Desam party (TDP) chief Nara Chandrababu Naidu expressed his despondency over the problems concerning Electronic Voting Machines (EVMs). According to him, polling was delayed at several places as the EVMs were not functioning.

On the other hand, in another latest development about the usage of EVMs, the Supreme Court on April 9 directed the Election Commission to increase the arbitrary matching of VVPAT slips with EVMs from one polling booth at present to five polling booths per Assembly segment. This would mean that the Election Commission of India (ECI) has to count VVPAT slips of 20,625 EVMs in 2019 general elections.

Ever since the EVMs have been used for the elections, there have been many versions of arguments — while some sets of people support the usage of the EVMs, the others sets of people oppose. In this milieu, there arises a need to understand whether the use of EVMs is a boon or bane.

Though the EVMs were introduced in 1999 elections in India, in actual fact EVMs were commissioned by the ECI in collaboration with Bharat Electronics Limited (BEL) and Electronics Corporation of India Limited (ECIL) in 1989 itself.

Nonetheless, the ECI has faced with an uncommon problem in Nizamabad Parliament Constituency in the recent general elections. As many as 185 candidates filed nominations in this constituency, posing a hard-hitting call on the smooth voting process.

Shattering all the difficulties into pieces, the constituency created history as 12 jumbo EVMs with a maximum of 16 candidates were used by laying them out in the shape of 'L', in each of the 1,778 polling booths in the constituency.

As far as usage of EVMs is concerned, there are many advantages. The EVMs are powered by an ordinary 6-volt alkaline battery. This overcomes the problem of using EVMs even at places where there is no power supply or erratic power supply.

As compared to the conservative balloting system wherein the heavy usage of ballot paper takes place, conducting elections through EVMs is much easier a process. Besides, it becomes cheaper in a longterm process as an investment on EVMs is a onetime measure — the cost per EVM as such is somewhere around Rs 13,000/- per unit.

The shelf life of EVMs is projected at 15 years. So, recurrently the same EVMs can be optimally used in all elections for 15 years. Due to the light weight of the EVMs and its compactness in packaging, the transportation of EVMs is also easier as compared to ballot boxes.

As concerns the counting of votes, the EVMs enable the easiness and fastness. Beyond doubt, in places where illiteracy is an issue, the uneducated voters find EVMs easier than the ballot paper system.

For the reason that the vote is recorded only once, bogus voting can be avoided greatly. One important fact about the EVMs is that the unit can store the result in its memory before it is erased manually.

Another advantage of the EVMs is the totaliser unit that can be connected to several balloting units would display only the complete results from a particular constituency.

This ensures concealing of votes from individual polling booths. Besides all these advantages, indirectly, the EVMs are one of the means that reduces carbon footprint — because — they avoid usage of so much of paper, which is produced after cutting down of many trees. In this manner, EVMs come to be environment-friendly!

As far as the disadvantages are concerned, after all, EVMs are electronic gadgets. Thus, EVMs are sensitive to the extent of operational aspects. As EVMs use photosensitive electronic components in it, at times it becomes difficult in conducting elections using EVMs under adverse climatic conditions wherein the atmospheric temperatures reach its high.

On February 13, 2010, an international conference in Chennai on 'the Indian EVMs and their Tamperability' was held under the chairmanship of Subramanian Swamy.

The conclusion was that the Election Commission of India was evading its accountability on the transparency in the working of the EVMs. Two months later, in April 2010, an independent security analysis was also conducted, according to which EVMs are prone to several potential vulnerabilities.

However, the Election Commission of India reiterates that without having physical access and pretty high technical skills, tampering of the EVMs is not possible.

It is a point to ponder whether so many thousands of EVMs can be tampered to impact the results of an election by gaining physical access to them! As such the EVMs are stored under strict security that can be monitored by contenders or their agents all the time.

In a vast democratic country like India, EVMs best suit the election process as they have many advantages as compared to the conventional balloting system. More so, the recent direction of the Supreme Court would expel many such doubts as tampering of EVM units.