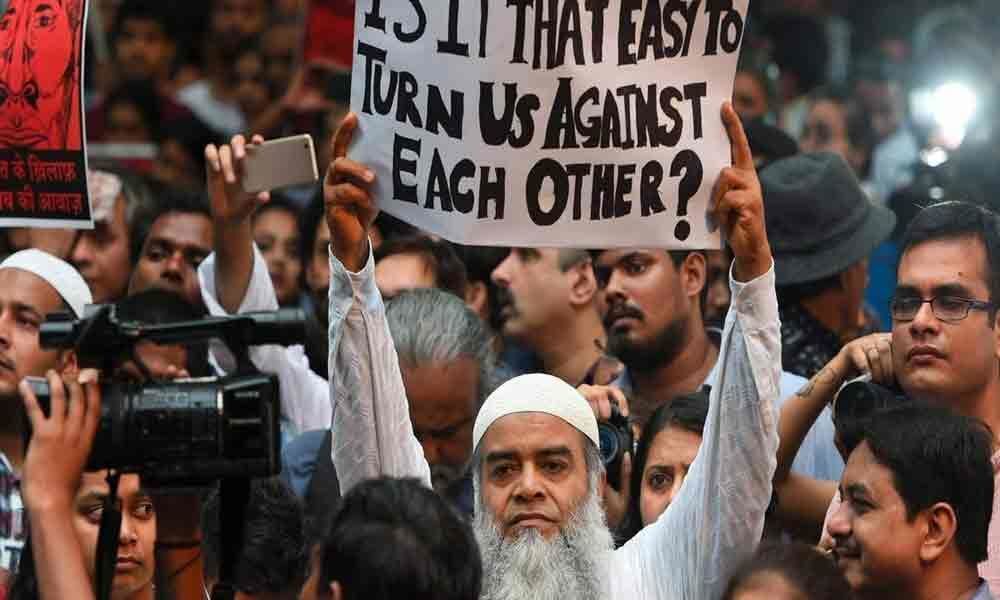 On his recent visit to the United Kingdom, President Donald Trump was faced with massive protests. Anti-war campaigner and Labour party leader Jeremy...

On his recent visit to the United Kingdom, President Donald Trump was faced with massive protests. Anti-war campaigner and Labour party leader Jeremy Corbyn was leading the protests, which provoked Trump to call Corbyn a "negative force."

In these dystopic times, a life-long anti-war campaigner is called a "negative force", just as anyone suggesting restraint with India's neighbours is called anti-national. Orwell in 1984 summed this up presciently: War is Peace, Freedom is Slavery, Ignorance is Strength.

Jon Michael Turner, an American soldier who served in Iraq, tore his medals and threw them away at a press conference. He went on to graphically describe how soldiers were encouraged to indulge in brutality against innocent civilians with offers of incentives. He recalled his 'first kill' and the applause he got for it.

I am sorry for the things I did. I am no longer the monster I was." He flagged the scale of the tragedy saying that there were more than a million American soldiers who went in and out of Iraq and the 'possibilities are endless.' There have been many other wars and conflicts that have followed, that the world continues to ignore. Often encourages. All in the name of national interest.

Soldiers, basically young men and women from ordinary families, who go to war or conflict areas return seriously damaged, sometimes physically, but most times psychologically. They suffer from what is now called post-traumatic stress disorder, PTSD for short. Psychologists counsel these individuals and help them to integrate into normal life.

Those who go through PTSD are proof that young people have a conscience and are telling society that killing of unconnected others and brutalising innocents for whatever reason is abnormal and is psychologically crippling. Hundreds of men working for the paramilitary services in the conflict areas in India too commit suicides every year.

But war-mongering leadership all over the world, including India, breed a culture of barbarity that condones committing crimes with impunity against innocent people and taking pride in it. Lack of remorse is considered a virtue.

In India we have seen over the last few years a trend of "out-sourced violence" in "civil society" – gangs surround helpless people and lynch them. Often the proof of the act is provided by the perpetrators who proudly videograph it and announce it to the world. Very few of them, if any, have faced the force of the law. The perpetrators have shown an alarming lack of humanity and conscience, but so have their handlers who ensured that no law of the land punishes them.

The fact that there is a wide-spread approval for such monstrous behaviour, individually and in mobs, shows that the Indian social fabric is under the spell of a mass psychosis. Neither the perpetrators, their abettors, nor the society around them, appear to have a conscience that can be troubled.

What is at the root of this inhumanity on a mass scale? Is it the propaganda and falsehoods that are being deliberately circulated against individuals and communities on social media and some mainstream media? Social media users are pointing at the relentless discourse of hate that is continuing even after the elections.

In 1961, Hannah Arendt, reporting for the New Yorker on Adolph Eichmann's trial for sending thousands of Jews to the gas chambers under the Nazis, found him blandly bureaucratic and uninteresting. Remorse did not appear to be necessary. She says that his crimes seemed to be without intent. It was impossible for him to think that he was doing anything wrong. It was a job for him.

When we hear and see the lynchers in their triumphal display of power over the helpless victims in the videos and the subsequent endorsement from their mentors for the deeds, this too appears like the "banality of evil", but with an intent. What we are confronted with is not the apathetic following of orders of an evil boss, but a macabre pleasure in participating voluntarily in the evil enterprise.

It is random. It is unregulated. It catches the victims when they are unguarded. The sharp edge of faith, the "holy sanction," behind the killings seems to place the crimes on a plane above the law of the land and the judiciary.

This factor of faith has succeeded in replacing empathy with animus in the lives of ordinary people. These dark impulses that we were afraid to acknowledge within ourselves, we now flaunt with confidence. Somewhere along the line, the restraints of the conscience have broken open, and the socio-cultural opprobrium of such behaviour has turned into applause. We now paradoxically accept the necessity of such evil to survive, in the name of faith and nation.

This Parliament that houses nearly half of the legislators with criminal background has been unambiguously endorsed and elected by us to safeguard our lives and the Constitution. Is the possession of such capacity for evil indeed a ticket to power?

Balbir Singh, Yogendra Pal and Shive Prasad, the three kar sevaks who helped bring down the Babri Mosque, converted to Islam in remorse. Much like Jon Michael Turner, they too seem to have understood that "At one point of time it seemed ok. But reality has shown that it is not." Turner, Singh, Pal and Prasad have decided not to be instruments of evil. There lies our hope. But have we heard of them?