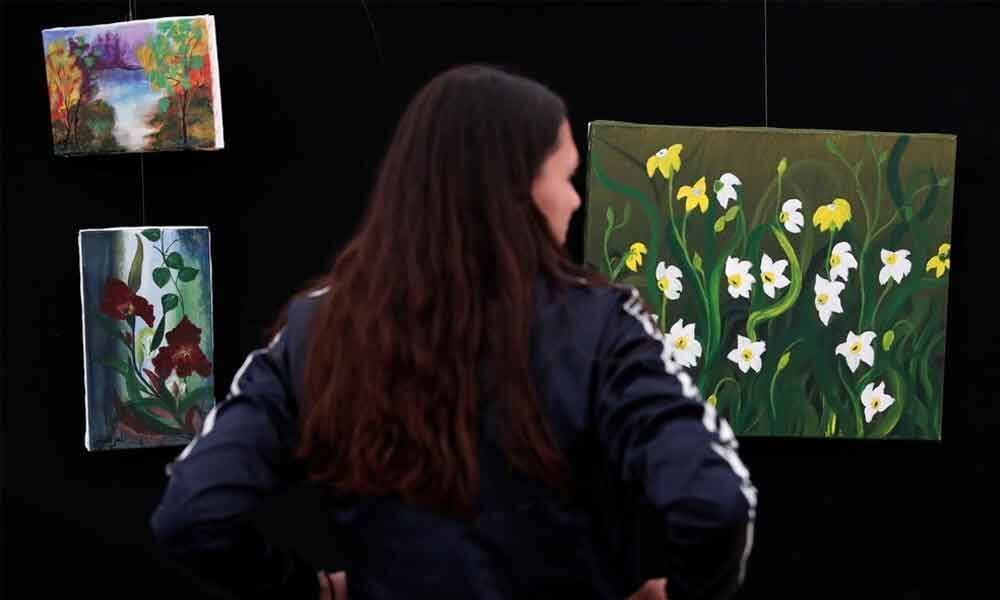 A young Afghan woman, who has been in a holding camp for asylum seekers on Hungary's border for months, gets only a faraway glimpse of trees from her home in a shipping container.

A young Afghan woman, who has been in a holding camp for asylum seekers on Hungary's border for months, gets only a faraway glimpse of trees from her home in a shipping container.

So, she paints trees, birds and flowers to help long days pass by.

Mursal Faqirzada, 32, has been on the road from Afghanistan for over four years. She started painting in Serbia two years ago, before seeking asylum in Hungary.

Now some of her work is exhibited by the United Nations refugee agency (UNHCR) at Budapest's week-long "Love Revolution" music festival, which draws hundreds of thousands of visitors.

Faqirzada arrived at Hungary's southern border with Serbia with her parents at the beginning of this year and submitted requests for asylum which were rejected by the authorities.

A Hungarian court heard her appeal and her case is now pending again at the Immigration Office.

She cannot leave the transit zone camp at the border unless she returns to Serbia and gives up her asylum claim.

"I really like painting the forest and things like that, because on my journey we were in many forests... I have very bad memories of that, but I love painting forests," she said.

"As you know painting is not something that many like (in Afghanistan), they say it is sinful and so on, so they don't do it. The first time I ever painted was in Serbia," she added.

Painting gives her a sense of peace in the camp, she said.

Last month the United Nations Special Rapporteur on the human rights of migrants said there were 280 people in two such "prison-like" facilities on Hungary's southern border, 60% of them children.

Prime Minister Viktor Orban leads a nationalist government with a strongly anti-immigrant platform, an issue that has dominated his agenda since 2015 when hundreds of thousands of migrants marched through Hungary en route to western Europe. There are hardly any people coming these days.

Faqirzada's family fled Afghanistan after suicide bombers blew themselves up inside the Kabul Parliament building where her father worked as a public servant.

Erno Simon, a spokesman for UNHCR in Budapest said that since last year Hungary has been automatically rejecting all asylum requests from people who arrived via Serbia, saying it was a safe third country. He said Faqirzada's parents were awaiting deportation as their case had been rejected.

Simon said it was unacceptable that asylum-seekers, including many children, were being detained on the border, as seeking asylum was a fundamental human right. "There is no grass, no trees, nothing, just razor-wire fence, security guards and armed policemen," he added.

The Hungarian government says the camps are not detention centres, as asylum-seekers can always leave them for Serbia.

At the music festival, billed as "The Island of Freedom", the handful of paintings are exhibited in a tent not far from the main stage.

"I think they are incredible, especially for someone who has only two years' experience and I think it is really amazing that she can make those paintings out of a refugee camp," said Dutch festivalgoer Chiel van Dyck, 18.

"It is horrible for those people to get ripped out of their homes and they have to leave their country."