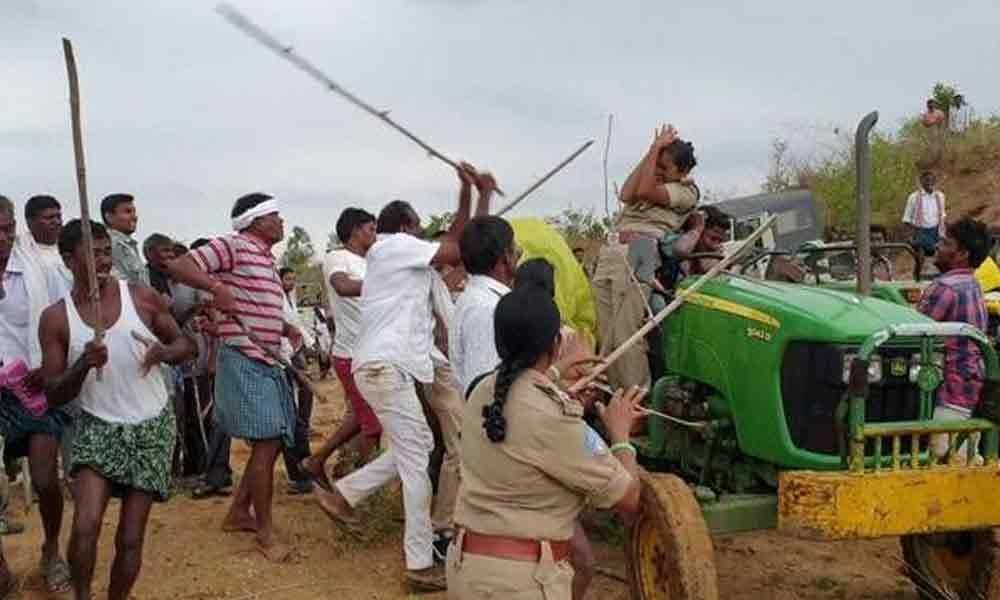 Forests are under the grip of encroaching businessmen with political connections, while the fate of forest rights of Adivasis are in the hands of...

Forests are under the grip of encroaching businessmen with political connections, while the fate of forest rights of Adivasis are in the hands of forest officers who wield more arbitrary/discretionary powers.

Telangana wants its Forest officers to implement Haritha Haram (green necklace) for afforestation, its MLAs and their henchmen work in their own interest.

Bringing this ongoing conflict to the fore, the news of brutal attack on a woman Forest officer in Komaram Bheem-Asifabad district on June 30 spread like wildfire.

The real problem at the root is the 'ownership' of forest lands. Adivasis use forest lands for their livelihood, while the encroachers want to smuggle the forest produce for their own gains.

In fact, the Forest Department's determination to reclaim its land in Komaram Bheem-Asifabad is sowing seeds of suspicion - whether the government was deliberately encouraging Forest department to raise plantations in both legally and illegally occupied lands.

The Forest Department officials claim that they were trying to reclaim the land that had been left out after pattas were given to tribals under Recognition of Forest Rights Act, 2005.

Officers also claimed that they were not touching the land that had been under cultivation by tribals for nearly a decade after 2005. Forest officers were trying to recover the land encroached nearly four to five years ago.

Ownership of 18 lakh acres of forest land out of total extent of State forests of 66 lakh acres has been claimed. Of this, 7.35 lakh acres are suspected to be under illegal occupation.

After the due process, the pattas were given under RoFR Act for nearly 3 lakh acres. Many a time, the tribals are blamed for destruction of forest cover as they are habituated to do podu cultivation (using some forest land for agriculture).

In fact, the encroachers fell the forests near village outskirts and raise cash crops such as cotton, with the support of corrupt bureaucrats in the Forest Department.

As a part of the afforestation programme, the assaulted Forest Range Officer (FRO) Anitha was trying to raise plantation in a 20-hectare area in Komaram Bheem-Asifabad district.

Then the local MLA Koneru Konappa's brother Krishna and his henchmen attacked her. She was seriously injured and hospitalised. Krishna was allegedly encouraging some people to occupy the forest land on his behalf.

There are serious allegations that Krishna is holding the forest land through benamees who are mostly the tribals. Under the pressure of these allegations, Krishna resigned from the post of Vice Chairman of Zilla Parishad and ZPTC member.

Some of the tribals are even holding pattas under RoFR Act. Through the names of these tribals, non-tribals have developed strong grip over the lands. Some of these non-tribal encroachers hold membership of the ruling Telangana Rashtra Samithi (TRS).

Through some pattas in the name of tribals, non-tribals are cultivating and raising plantations on forest lands. In fact, these forest lands belong to the State.

The government will be the trust or manager, and on its behalf, the Forest Department must upkeep the lands besides protecting it from encroachers. The protection of forest-produce and wealth is the duty of the government departments.

Two departments create confusion deliberately about the extent and ownership of the forest lands. From this ambiguity, the disputes arise which ultimately land up in revenue courts and courts of law up to the Supreme Court.

The corruption is cause of confusion. Because of confusion, the parties have to pay bribes to government officers to resolve the disputes. In the process, the extent of forest is reduced, deforestation increases, afforestation will happen only on paper.

Meanwhile the worst sufferers will be tribals and the State as a whole because of the degradation of forest.

The so called 'purification' of land records as far as these 18 lakh acres in forest is concerned, yet to happen. Hence the disputes and controversies thrive.

Two days after the woman FRO was attacked, there was another incident of attack on two employees. The story fabricated was that a group of tribals attacked a couple of employees of the Forest Department because they objected to ploughing of forest lands in Bhadradri-Kothagudem district.

Anitha was attacked when she, along with her staff and the police, had gone to Sarasala village in KB Asifabad district for plantation on a land under a compensatory afforestation scheme for Kaleshwaram lift irrigation project.

Video footage of the attack showed that Anitha climbing onto a tractor to escape from the bamboo stick-wielding people. Attackers are described as tribals and named Guttikoyas.

Who are the dacoits in forest?

The issue before the Supreme Court and the problem of the police probing into Sarsala incident of attack on FRO is one and the same.

Who are the thieves of forest and who are genuine residents from time immemorial? If Podu is source of life for Adivasis, it is cut-throat business for smugglers among non-tribal exploiting business community.

The Forest babus play the role of corrupt supporters of the powerful but the innocent tribals are the victims of highhanded behaviour of those in 'power'. Everybody knows who the encroachers are.

Along with the video of attack on FRO Anitha, the video of Telangana Chief Minister K Chandrashekar Rao criticising MLA Koneru Konappa alleging that he was involved in smuggling of forest wealth beyond Telangana comparing him with Veerappan, went viral.

There is a third video which looks like a sting operation which also was highly circulated on social media. This video showed that TRS MLA Koneru Konappa has been asking villagers to mislead the media about the events leading to the attack.

He was heard saying: "Tell them you have lands there and that the officials have dug up the land. Tell them you have been threatened. You should tell them that they beat you up 15 days ago, and again on that day."

The Forest Department claimed said that the land where the plantation drive is being held is a reserve forest area and accused the MLA's brother of trying to encroach the land and leading the attack to stop Forest officials from performing their duties.

There were also no reports of forest officials attacking the villagers. The MLA then says that he will call reporters to meet the locals, and adds, "Tell them that the attack occurred after they beat you up. All of you say the same thing."

Koneru Krishna was arrested and then also made to resign as Zilla Parishad's vice chairman. A case was also registered against him and 15 others.

In a press note, the Forest Divisional Officer of Kagaznagar alleged that the MLA's brother and the locals conducted the attack as they had a 'mala fide intention' to occupy the reserve forest land.

Forest officers should decide who should they help, encroachers or forest dwelling Adivasis?