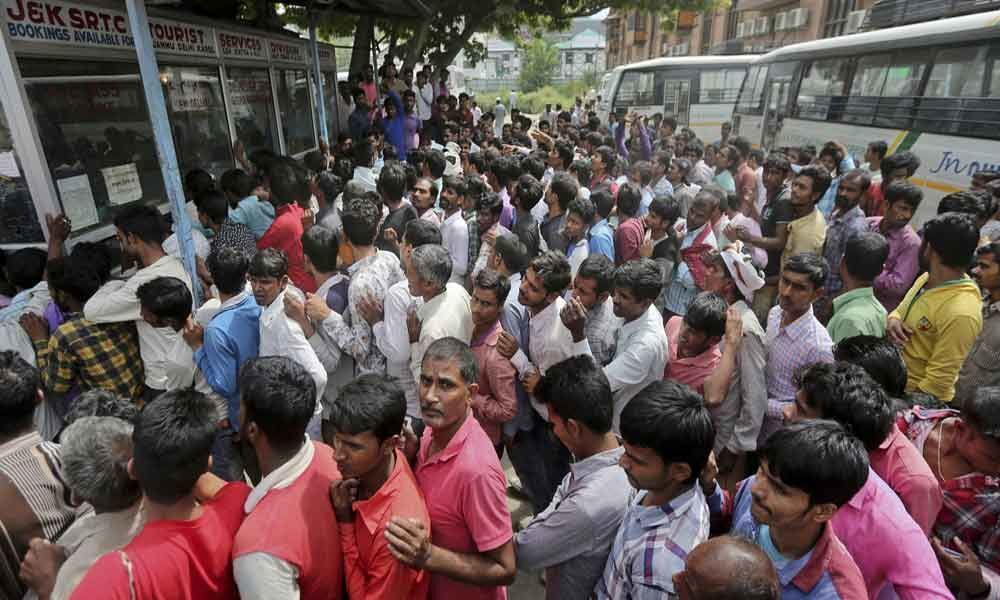 Kashmir's relation with people hitherto classified as outsiders is changing now that the Centre has scrapped Articles 370 and 35A.

Kashmir's relation with people hitherto classified as outsiders is changing now that the Centre has scrapped Articles 370 and 35A.

These Constitutional provisions barred a non-native from becoming a permanent resident of Jammu & Kashmir (J&K) and buying land there, besides stating that a Kashmiri woman who married a non-Kashmiri would lose the right to own property.

As the news of revocation of these Articles sinks in, the locals are allegedly driving out the labourers hailing from other States who have been working there, lest they begin aspiring to settle there now that permanent residency is not outlawed.

At the same time, native women who had become outsiders by marrying a non-Kashmiri are now eagerly dreaming of going back and buying a house where they grew up.

At about 9.15 pm on Thursday, when a packed Jammu Tawi-Rajendra Nagar Terminal Archana Express arrived at Patna Junction, most of its passengers were migrant labourers from J&K who had to flee because of the worsening situation in the Valley.

Some said Kashmiris threatened them of dire consequences while others said their landlord advised them to leave the Valley until the situation improved.

Originally from Bihar, Raju, a painter working in Srinagar, said Bihari labourers were not being allowed water from the community tap. "Every time a Bihari went out to fill water, stones were pelted by the Kashmiris," he alleged.

Kolkata resident Pawan Mandal, who works at a sand extraction unit in Bijbehara in Anantnag district, said the owner of the unit asked them to leave citing tension in the region. He said the owner assured to call them back once the tension ends.

Samastipur resident Brij Nath Kumar, a manual labourer in Srinagar, said the police were advising the migrants to leave the Valley because of conflict in the region.

While the ensuing tension is the major reason behind people leaving, Amit from Samastipur said he left because of shortage of essentials and food owing to the curfew in the Valley.

Such is the rush among migrant labourers to leave that many are finding it hard even to find transportation.

Kailash Paswan, who hails from Banka in Bihar and sells gol gappas and ice cream in Srinagar, said he couldn't find any transport to reach Jammu railway station.

While he finally got a bus, the security checks were so tight that it took him more than 16 hours to reach Udhampur and then Jammu, which is about 60 kilometres away.

While this section of outsiders can't wait to get out, Kashmiri women who had lost J&K citizenship after they having married an outsider, are vying to go back now that they are free to own property and settle down in the state.

Hailing from Kashmir, Supriya Mazari and her family had shifted to Dehradun in the early 1990s, after Kashmiri Pandits started getting attacked. She was in her early teens then.

She later got married to a Maharashtrian and thus lost the right to own any property in J&K as per Article 35A.

Sharing how her family fled Srinagar in the early 90s after Kashmiri Pandits started getting attacked, Mazari reminisced: "Rifle-toting terrorists used to pass through our neighbourhood. Although no one from my family was killed, people were shot and killed in the neighbourhood."

She said she hadn't visited the Valley since, though her husband sometimes jokes about visiting his 'real' in-laws in Kashmir.

Mazari said thoughts of settling in her motherland began surfacing in her mind when she started reconnecting with her school friends on the social media.

When she approached her father with a desire to build a house in Kashmir, he made her realise that since she had married an 'outsider', local laws won't allow her to buy any property there.

"This was how I came to know about the ridiculous provisions and practical implications of Article 370 and 35A for the first time," she said.

Mazari said their ancestral house was in Nai Sadak, close to the iconic Lal Chowk in Srinagar, and her alma mater, Lal Ded Memorial High School, has since transformed into Lal Ded Cultural Center.

She however, does not mind the changes. The young woman just wants "to go back home".