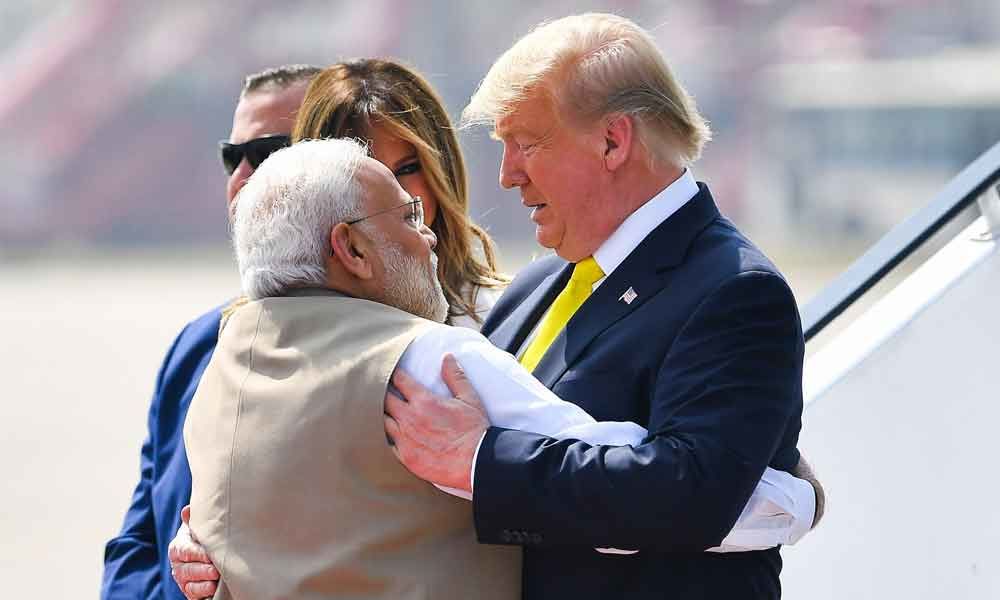 The ‘new US policy’ of India is slowly but surely unveiling itself. US President Donald Trump’s 2-day maiden official visit to India has more than a...

The 'new US policy' of India is slowly but surely unveiling itself. US President Donald Trump's 2-day maiden official visit to India has more than a few definitive outcomes for enhancing the government to government, leader to leader, people to people bilateral relationships between India and the USA.

International diplomacy operates for eternity, it is a continuous process of engagement. India and the USA relationships have its historic highs and lows in the checkered history, between these two massive democracies. In fact, the relationship dates back much before India attained Independence from the oppressive British occupation.

There is recorded history of US President Franklin D Roosevelt pressuring UK Prime Minister Winston Churchill to declare independence to India during the period leading up to the Second World War.

The pressure from President Franklin was so high that Prime Minister Winston Churchill had to threaten to resign from his position, if pushed further on this issue.

After Independence, US President Eisenhower was the first to visit India. He proposed and extended a hand of friendship and a formal alliance with India with the first Indian Prime Minister Jawaharlal Nehru.

In fact, the USA supported the brand-new Republic of India with huge monitory and non-monitory grants and food supplies all the way through the testing times in 50's, when India fell short of surplus food production for its population.

Despite all the proactive support extended by successive US Presidents, India's Prime Minister Nehru has crafted a foreign policy to befriend the 'USSR', a cold war adversary and an enemy State of the USA, in the most volatile era of the world.

However, Jawaharlal Nehru had also made a quick and smart decision to maintain an equal distance from both the cold-war adversaries through his NAM (Non-Alliance Movement) initiative in 1961.

Nevertheless, one cannot question the wisdom behind Nehru's decisions now, keeping in view of the geo-political and domestic-political compulsions of that era.

Against this backdrop, Pakistan has become a compulsive ally for the USA for its geo-political supremacy in the South Asia and South East Asia theatre.

In retrospect, I feel India lost a huge opportunity of being a lasting ally of the USA. Especially after our sworn friend the USSR disintegrated in late 80's and we were left 'friendless' in Asia Pacific region extending up to South East Asia.

Pakistan, despite being a rogue State, leveraged its friendship with the USA by benefiting through mammoth dole-outs on which it literally survived so far. If not for the USA, Pakistan would have disintegrated long ago, with internal strife and a dead, unviable economy.

Prime Minister Narendra Modi understands the historic 'missed opportunity' with the USA. As I clearly see, Modi, with a vision for long-term prospects of India being an economic and cultural superpower, has initiated a definitive reform in India/US foreign policy.

Since his first term in 2014, PM Modi has taken many 'first steps' to lead this 'massive change' towards a brand-new foreign doctrine in the India-US relations.

This visit of US President Trump is a historic milestone in India and the USA attempts to be 'formal and mutual allies'. As the transformation from a 'non-ally' to a 'formal-ally' cannot be a rapid sudden shift, the new coinage of the term was spelt out by PM Modi – 'Comprehensive Global Strategic Partnership' – which in real diplomatic terms can mean 'formal allies'.

The USA itself is undergoing a huge political and economic transformation at home, which is reflective of Donald Trump's election as its President. A rank outsider to politics, a businessman and a right of the center-Republican party candidate, Donald Trump's election was a historic milestone in the domestic politics of the USA.

US President Trump and Indian Prime Minster Narendra Modi share more similarities than differences. In the current global context, both the leaders understand the impending need to re-ignite their national economies. They also realise that they must make disruptive decisions to reform and transform their nations.

They have to challenge decades of hesitant, sluggish and visionless status-quo decision-making, which is natural to large democracies, over a period of time.

India has a stupendous untapped potential, which can be unleashed in the areas of agriculture, manufacturing, technology and knowledge sector. Trade with the USA in goods and services sector has grown 17% just in one year since 2017 to 2018 and has potential to grow multiple times.

India does not need to worry about always being on the positive side of the trade balance.

India has been exporting more and importing less, in the trade relationship with the USA since decades. India has also been reaping great benefits of GSP (General System of Preferences) preferential tariff regime till recently.

There is a 25 Billion USD trade deficit which the USA is currently bearing in trade with India, which certainly runs the risk of being looked at, as an exploitative trade partner from the US perspective. For a sustainable and lasting trade relationship, India can concede a bit, so should the USA to arrive at a historic trade deal sooner, than later.

The 3 billion USD deal of Seahawk MH MR 60 & Apache helicopters is just the tip of the ice berg, as India is already considered as 'most favoured nation for defence partnership' by the USA, India will procure the best weapon systems and defence technology it requires to protect its national security interests and create deterrence to its distractors in the region.

While the 'Big US / India trade deal' is being worked out by multiple ministerial delegations on both the sides, it is quite critical to note that India and the USA relations have gone up by more than few notches during the maiden official visit of President Trump to India.

All these outcomes are historic milestones and can lead to a glorious future for Indians and India.