Is it really a clean sweep for TRS in Telangana? 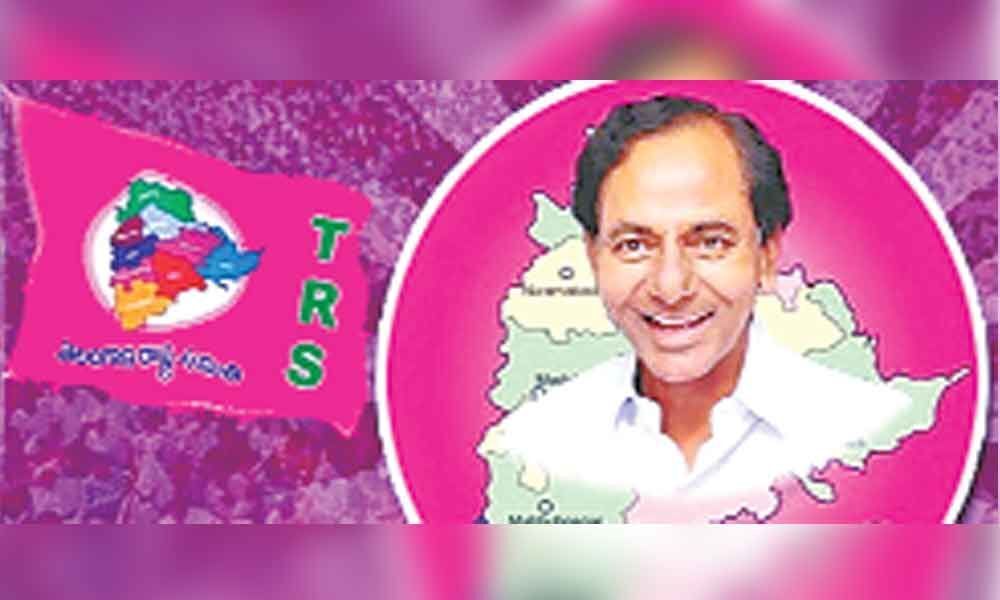 Seemingly, it is fair show for TRS with continuing victory spree

After revising the preliminary voter turn-out percentage in Telangana, the Election Commission has finally set the state voter turn-out at 62.69 percent.

Compared to the assembly elections held last year, this time the voter turn-out has been still lower, despite awareness campaigns run by the Election authorities.

Much is speculated about the winning prospects of candidates and likely thin margin of victory because of low turn-out. However, all the parties in the election fray have made claims of victory in the seats contested by them.

This time, the race has been between a state party—TRS—and the two national parties ---Congress and BJP. The Congress leadership is sure of winning in Bhongir, Nalgonda, Khammam and Chevella constituencies while BJP is claiming victory in Secunderabad constituency.

Whereas TRS has started pitching voice for Federal Front and is confident of winning 16 seats in the State to enable it to play a major role at government formation at the Centre.

Working on a mix of strategies to fight anti-incumbency and to capitalise on TRS founder and Chief Minister K Chandrasekhar Rao's popularity, the pink party has fought the Lok Sabha elections held on April 11.

The ground reality in these constituencies indicates an easy victory for TRS. Going with each constituency data and the voter turn-out, we see the figures bear testimony to the claims of TRS. The analysis of each of the constituencies shows that:

In Hyderabad constituency, the voter turn-out stood at 44.75 percent. The candidates are Asaduddin Owaisi from AIMIM, Dr Bhagwanth Rao from BJP, Feroz Khan from INC and Pusthe Srikanth from TRS.

Although the TRS is in understanding with and supporting the AIMIM candidate, it still chose to nominate the fresh face Pushte Srikanth, who recently joined TRS.

Hyderabad has been an AIMIM party bastion since 1984 continuously. There is likely to be direct fight with AIMIM winning with clear majority and the BJP coming in the second place.

Going by the recent assembly election results, there has been a clear vote share for BJP and AIMIM.

In Nizamabad constituency, there has been a voter turn-out of 68.33 percent. The candidates are Kalvakuntla Kavitha from TRS, D Aravind from BJP and Madhu Yakshi Goud from INC.

Besides, a total of 180 turmeric farmers, ignited by the low minimum support price (MSP) and the government inaction, have filed their nominations to take on Nizamabad sitting MP and highlight their issues.

However, there would be nominal challenge by these farmer candidates and a fight is likely between TRS and BJP with Kavitha winning majority and TRS lawmaker's son D Aravind, who is contesting on BJP ticket, coming second in the race followed by the Congress and independents. Going by assembly election results also, we see the trend in favor of TRS.

The voter turn-out percentage in Karimnagar constituency stood at 69.45 and the candidates in the fray are Vinod Kumar Boinapalli from TRS, Bandi Sanjay from BJP and Poonam Prabhakar from INC.

The two candidates of BJP and Congress were also the assembly election faces in 2018 and lost to TRS rivals.

Hence, there are fair chances of the sitting MP Vinod Kumar retaining the seat with good majority as he faces no anti-incumbency.

Adilabad ST reserved constituency saw a voter turn-out at 71.44 percent and the candidates are Godam Nagesh from TRS, Soyam Bapu Rao from BJP and Ramesh Rathod from INC.

There is going to be a fight between the TRS and INC with the former getting the majority and the latter coming to the second position. The BJP is likely to be in third place. In the assembly elections also, it was a clean sweep for TRS.

In Warangal SC reserved constituency, the voter turn-out has been 63.65 percent. The candidates are Pasunuri Dayakar from TRS, Chinta Samba Murthy from BJP and Dommati Sambaiah from INC.

There is going to be clear majority for TRS in this constituency. The win in 2014 general elections and the subsequent victory in the bye elections in 2015 and the recent assembly election 2018 results indicate TRS wave.

Kadiyam Srihari won from this Lok Sabha constituency in 2014. In the 2015 by-election, the current candidate Pasunuri Dayakar was elected with thumping majority.

In the present scenario also, the TRS will win with good majority while the Congress and BJP will occupy the second and third position respectively.

In Bhongir constituency, the voter turn-out stood at 74.39 percent. The candidates in the fray are Boora Narsaiah Goud from TRS, Komatireddy Venkat Reddy from INC and PV Sham Sunder Rao from BJP.

In this constituency, there is direct fight between Congress strongman---Komatireddy Venkat Reddy and the sitting MP of TRS -- Boora Narsaiah Goud.

Komatireddy Venkat Reddy is the elder brother of Rajagopal Reddy, who had represented this constituency in 2009. So there could be sympathy votes for him.

Another plus point is that he had been in the forefront of Telangana Movement. However, the assembly election results indicate TRS win and Congress as runner up. The BJP is out of the race as per the ground reality.

In this constituency again, there is likely to be a fight between TRS and INC candidates with the former emerging as winner and the Congress coming next.

BJP will be in the 3rd place. The assembly election results also indicate a win for TRS and the other two parties as runners-up.

In Medak constituency, the voter turn-out stood at 67.72 percent. The candidates are Kotha Prabhakar Reddy from TRS, Raghunandan Rao from BJP and Gali Anil Kumar from INC.

In this constituency also, there will be direct fight between the TRS and INC. As the constituency is a bastion of KCR, there are more chances of people sympathizing with his party.

There is going to be fair amount of votes for BJP candidate as he was in the Telangana movement. Going by the recent assembly polls, we can see a landslide victory for TRS. A defector from TRS to Congress, Gali Anil Kumar won't be drawing more votes.

It is in these seven constituencies that there is challenge from the opposition to the ruling TRS MPs. It will be a fight between TRS, Congress and BJP.

Considering the anti-incumbency factor in other constituencies, TRS has fielded 10 candidates, among which 9 are entirely new faces, and one is a familiar face. The victory in these constituencies would actually prove the mandate of people for the TRS.

In Mahbubnagar constituency, the voter turn-out stood at 68.79 percent and the candidates are Manne Srinivas Reddy from TRS, DK Aruna from BJP and Vamshichand Reddy from INC.

Both strong leaders-- DK Aruna and Vamshi Chand [ex-MLAs]--are going to pose challenge to first-timer Srinivas. But the recent Assembly election results show a fair victory for TRS while BJP and Congress may take up 2nd and 3rd position respectively.

In Khammam constituency, the voter turn-out has been 75.28 percent and the candidates in the fray are Nama Nageshwar Rao from TRS, Renuka Choudhary from INC and D Vasudev Rao from BJP.

In this constituency, contests were witnessed between Renuka Choudhary and Nageshwar Rao in the past and the same competition may continue this time too.

Vasudev Rao, being a new face, is likely be out of the race and, going by the assembly poll results, we can say that TRS would win, while Congress will be runner-up.

In Peddapalli SC reserved constituency, the voter turn-out stood at 65.43 percent and the candidates are Borlakuntla Venkatesh Nethani from TRS, S Kumar from BJP and A Chandrashekar from INC.

In this constituency, it is all a first-timer fight but Chandrashekar has experience as a 5-time MLA from Vikarabad assembly segment. The recently concluded assembly election results show a victory for TRS. The INC is likely to be in the second position.

In Mahabubabad ST reserved constituency, voter turn-out has been 68.79 percent. The candidates in the fray are Malothu Kavitha from TRS, Porika Balram Naik from INC and Jathothu Hussain Naik from BJP.

Here again, there are chances of a repeat narrative of assembly polls 2018. Malothu Kavitha, a former assembly member herself, is contesting on TRS ticket and likely to win.

Secunderabad constituency saw a voter turn-out at 46.26 percent and the contesting candidates are G Kishan Reddy from BJP, Anjan Kumar Yadav from INC and Talasani Sai Kiran Yadav from the TRS.

In this constituency, there is going to be a triangular fight among TRS, Congress and BJP. Both strong leaders-- Anjan Kumar Yadav and Kishan Reddy-- may put up a challenge to new comer Sai Kiran.

The plus point for Sai Kiran is that he is son of minister and sitting TRS MLA T Srinivas Yadav from Sanathnagar. We can also conclude from the recent assembly election results that TRS would capture the seat while the BJP and Congress would come in 2nd and 3rd positions.

In Malkajgiri constituency, the voter turn-out was 49.40 percent. The candidates are N Ramchandra Rao from BJP, A Revanth Reddy from INC and Marri Rajashekar Reddy from TRS.

There would a triangular race among the three parties. Marri Rajashekar Reddy is first timer in the fray. The BJP MLC Ramchandra Rao had also contested 2018 assembly elections but lost to TRS. If the same trend continues, then TRS will win and Congress and BJP would be runners-up.

In Nalgonda constituency, the voter turn-out stood at 74.11 percent and the contesting candidates are N Uttam Kumar Reddy from INC, Vemireddi Narasimha Reddy from TRS and Garlapati Jitender Kumar from BJP.

The State Congress president Uttam Kumar Reddy, who is also MLA from Huzurnagar, is likely to pose formidable challenge to the TRS first-timer. The assembly election results, however, indicate a fair victory for TRS with Congress as runner-up. BJP will occupy the third position.

In Chevella constituency, voter turn-out has been 53.22 percent and candidates in the fray were Konda Vishweshwar Reddy from INC, Ranjith Reddy from TRS and B Janardhan Reddy from BJP.

The constituency witnesses a keen fight between TRS and Congress. The sitting MP Konda Vishweshwar Reddy, who was elected on TRS ticket in 2014, is contesting from the same constituency but on Congress ticket this time.

He defected to Congress from TRS in 2018. From the 2018 assembly results, we can see the wave in TRS favour. But it will be interesting to see who the people will select and will they be loyal to TRS.

In Nagarkurnool SC reserved constituency, voter turn-out was 62.29 percent. The candidates in the fray are P Ramulu from TRS, Dr Mallu Ravi from INC and Bangaru Shruthi from BJP.

In this constituency also, there would be triangular fight among the three parties but as per the 2018 assembly results, we can say that TRS will win with good majority.

The Congress and BJP would get the second and third position respectively. The KCR factor is again going to work here.

In 2014, TRS swept both assembly and Lok Sabha polls. Now, the ground reality and the poll trends indicate fair chances for TRS.

The exact picture will, however, come out on May 23, the day for announcement of results. If the TRS sweep is as good as assumed with 16 seats in its kitty, then it can play a major role at the Center in the formation of next government as envisaged by KCR.

Coronavirus: 106 quarantined in Maharashtra since January, no positive test results yet

Gold worth Rs 35 lakh seized from Dubai passenger at Hyderabad...