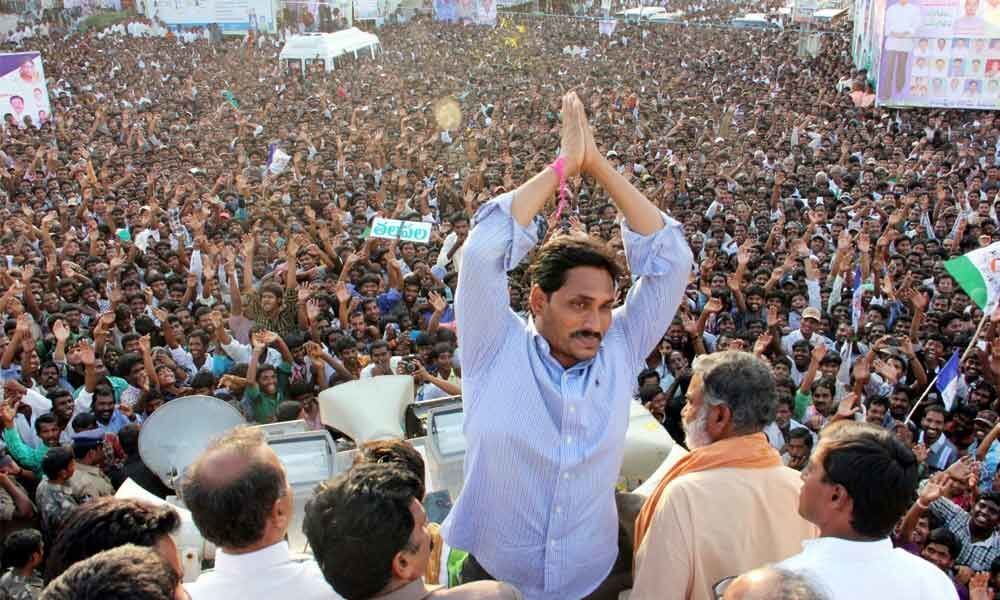 Is opposition becoming extinct in India? With the kind of politics we are witnessing, one wonders whether the Opposition will be ‘extinct’ from the field of political bio-diversity?

Is opposition becoming extinct in India? With the kind of politics we are witnessing, one wonders whether the Opposition will be 'extinct' from the field of political bio-diversity?

While decisive results ensured the YSR Congress Party in Andhra Pradesh and BJP (NDA) at the Centre steer the destiny of people for the coming five years, we find the Opposition in a weak and meek position.

After 2014 elections, Telugu Desam Party (TDP) chief N Chandrababu Naidu was having complete command with absolute majority in the Assembly.

Though he aligned with the BJP, the latter remained a minor partner in the government. The YSR Congress Party was a very strong Opposition with more than 60 members in the House.

His strength was reduced because the TDP encouraged defections. The YSRCP claimed that the TDP was purchasing the MPs and MLAs into its fold.

We have tenth schedule in the Constitution of India validating only a merger of a party with its 2/3rd members with another party.

Legally any party legislators defecting, if falling short of 2/3rd of that party, must be disqualified. The authority to hear and decide the complaints against the defections is the 'Speaker', a constitutional office holder.

The Speaker is supposed to be a dignified position; the occupier should not behave like a party leader and his loyalty to ruling party shall not decide the issues of defection and discussion in the House.

Speakers all along behaved like a loyal Ministers or legislators but not as a judicious personality. The culture of brazen defections is strengthened and encouraged by political parties in Telugu States now and earlier in combined Andhra Pradesh.

The Congress party is equally to be blamed for its coup in 1984 based on horse trading.

But the coup by Chandrababu Naidu in 1995 was worse, because he has used the office of the Speaker to defy the tenth schedule of the Constitution and decimated the founder NTR's leadership in a very treacherous manner.

Almost all the office holders at that time breached the Constitution. The writ petitions by NTR group could not yield any results because of tactics and strategies which could not be justified by law or morality.

First, such manipulation is considering series of defections of one or two MLAs as 'split' by the Speaker.

Another worst set of defections engineered by Telugu Desam Party without any need was in the previous Assembly where 23 legislators were lured from the YSRCP to the TDP besides three MPs.

The complaints by the YSRCP must be heard by the Speaker, who acted like loyal soldier of Chandrababu Naidu rather than upholding the Constitution.

The tenth schedule of Constitution is just a useless piece of paper for them. There is no time limit imposed for the Speaker to act on complaints. He can happily use it as cushion of seat until the expiry of five years.

Mr Venkaiah Naidu, the present Vice President and Chairman of Rajya Sabha, has decided to hear the 'defection' complaint within couple of months and advised the Speakers and chairpersons of Assemblies to act in reasonable time.

Though it was criticised that he rushed to disqualify the defectors because it served political interests of the ruling party, it was constitutionally correct judgment, which should have been followed by all presiding officers.

In case of any defect in decision of presiding officer, the disqualified legislators have a constitutional remedy to challenge it in constitutional courts.

By sitting over the complaints, the Speakers deny the legal remedy to victimised party and give undue advantage to ruling party reducing democracy into a farce.

Only way left was to wait until the next elections and seek the mandate of the people. Hence 23 defected MLAs and 3 defected MPs enjoyed fruits of defection which included Cabinet berths also.

Similarly, the legislators of other parties were lured into the ruling party in Telangana and one of them even rewarded with a Cabinet berth, and in recent elections his son also was facilitated with Lok Sabha ticket.

Even after 2018 Assembly elections, some of the Congress legislators defied the people's will by defecting to ruling side.

The YSRCP had a landslide victory with almost fifty per cent votes and gained 86 per cent of seats in Assembly. Poor Naidu, even after garnering support of 39.1 per cent votes ended up with just 23 seats in House.

Naidu's efforts resulted in just 3 MP seats out of 25, which again matches with the number of MPs he lured from YSRCP earlier. It's a coincidence that appears like a slap on defection-based strategies of ruling parties.

The Andhra Pradesh voters preferred TDP to be in the Opposition. Jagan's party secured 49.95 per cent votes, a massive mandate indeed.

The hard work and networking of Naidu also yielded 39.18 per cent votes to the TDP, which is not a small achievement in the circumstances.

Just ten percent voters less than those voted for YSRCP, wanted Naidu's team to be in Opposition. (The Congress party is in similar situation at the Centre).

In AP the TDP is eligible to be a recognised opposition whereas in Lok Sabha Congress is not. It could be landslide for the YSRCP but how can you say that the TDP with 40 pc votes is decimated? (We can analyse the same way the 2014 results also.

Because YSRCP got substantial number of seats there was a strong Opposition with more than 60 members, until Naidu poached 23 to his side).

It is unfortunate that State governments where from the BJP got landslide victories in Lok Sabha elections are being shaken to pull down by means of splits and defections.

The party with massive people's support should not resort to cheap defections to finish off the Opposition. The Constitution and democracy envisaged a strong opposition to the rulers in House and among the people.

While legislators are given absolute freedom to criticise the rulers, the people have media freedom outside the House.

We need constructive Opposition to check mistakes and wrongs of the ruling party which might behave in an arbitrary manner because of absolute power arising out of unquestionable strength in lower Houses.