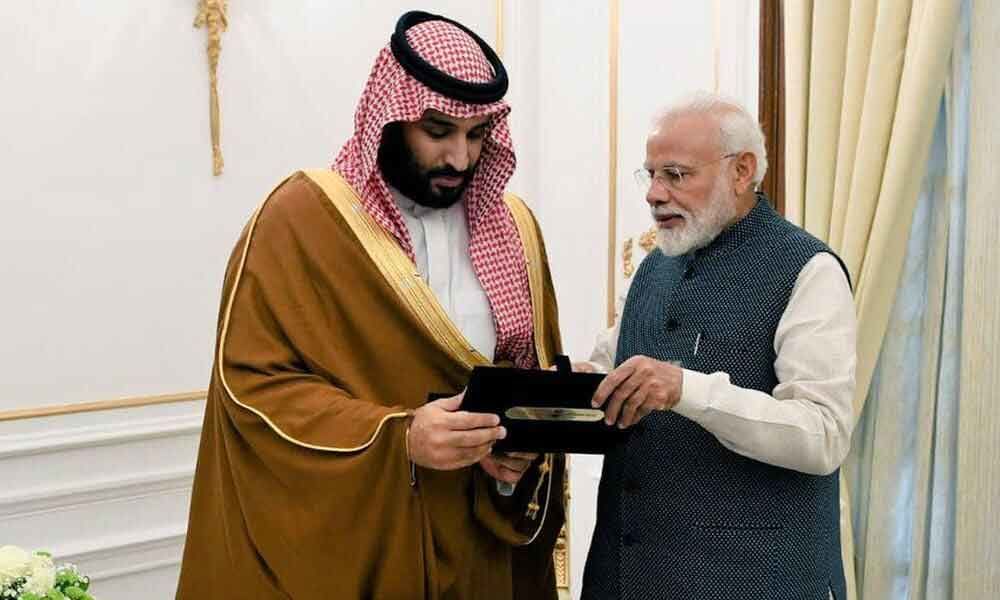 Since Narendra Modi was first elected Prime Minister in May 2014, there has been a perceptible shift in India's approach towards the Kingdom of Saudi Arabia.

Since Narendra Modi was first elected Prime Minister in May 2014, there has been a perceptible shift in India's approach towards the Kingdom of Saudi Arabia.

For centuries, though, the Arabian Peninsula figured prominently in India's social, cultural and economic dimensions, Riyadh's importance in the geostrategic realms has been limited, at least until recently.

Centuries of spice trade, the introduction of Islam shortly after the death of Prophet Mohammed, British India having the largest Muslim population in the world and the al-Saud's commitments to Non-alignment did not transform the Indo-Saudi relations into a strategic partnership.

The domination of pan-Arabism championed by Egyptian President Gamal Abdul Nasser was so overwhelming that the potentials of modern Saudi Arabia did not enamour India's first Prime Minister Jawaharlal Nehru.

Hence, the political contacts were few and far in between and even the Kingdom emerging as the primary supplier of crude oil and a second home to millions of Indian expatriate workers did not materially affect the transactional nature of the Indo-Saudi relations.

Moreover, the bilateral relations were a prisoner of India's overall foreign policy whereby Pakistan became its centre of gravity. The historical legacy and the Kashmir issue resulted in Pakistan dominating New Delhi's approach towards the Middle East.

But, driven by its great power aspirations, since the early 2000s India delinked Pakistan from its Middle East policy, especially towards the Gulf Arab countries.

This shift was primarily due to India's economic growth and ascendancy since the early 1990s and last year, it had overtaken France to emerge as the sixth largest economy in the world and is poised to surpass Brexit-ridden Britain soon.

Upon being re-elected this May, Prime Minister Modi declared his intention to make India a $5 trillion economy by 2024. The economic growth and prosperity encouraged India to strengthen its Gulf policy away from its traditional competition and rivalry with its neighbour. While Pakistan continues to be important in its strategic calculations, it no longer shapes India's Gulf policy.

However, since his election in 2014, Prime Minister Modi had significantly transformed the relations with the Kingdom of Saudi Arabia.

As part of his penchant for summits and visits, he has actively courted, cultivated and engaged the Saudi leadership. Through bilateral visits and multilateral meetings, he began reaching out to the al-Sauds in the Brisbane meeting of the G-20 leaders in November 2014.

No meeting took place during the Hamburg summit in July 2017 as a junior Minister represented the Kingdom. In addition, Prime Minister Modi visited the Kingdom in March 2016 and hosted Crown Prince Mohammed bin Salman in February this year.

During their meeting in Osaka, the Crown Prince invited Modi to be one of the chief guests for an international conference hosted by the Kingdom later this year. Interestingly, the Kingdom will host the next G-20 summit scheduled for November 2020.

In short, since 2014, the leaders of both countries have met as many as seven times and are expected to meet at least twice within the next year. Such intense Indo-Saudi contacts were unprecedented in the history of their relations.

The political engagements are complemented by the robust economic ties between the two. The Kingdom has been India's primary trade partner and with US$34 billion, the Kingdom was its fourth largest trading country in 2018-19.

The Kingdom is the largest supplier of crude oil to India. It is also home to over 2.8 million Indian expatriate community, the largest in the Kingdom, who contribute substantial remittances to their families back home.

During his meeting with Prime Minister Modi, Crown Prince Mohammed bin Salman increased the number of Indian Haj pilgrims to 200,000, making them the second largest hajjis after Indonesia.

During his February visit, the Crown Prince indicated that the Kingdom would invest up to US$100 billion in India's infrastructure projects and there are suggestions that Aramco, the largest oil company in the world, would pursue two-way investments with state-run Indian oil companies.

Efforts are on to secure the Saudi participation in various energy projects in India, including a US$44 billion refinery planned in the western coast of India.

Besides the burgeoning political and economic ties, both countries recognise the dangers of terrorism and extremism and are committed to fighting the menace of religious extremism of the kind manifested by the so-called Islamic State of Iraq and Syria or Daesh.

Unlike some of the western countries, the Kingdom has been quietly sending back criminals wanted in India. Above all, the Kingdom has pledged to increase its energy supplies should India face difficulties over oil imports from the Islamic Republic of Iran due to sanctions by the Trump Administration.

For its part, India has been understanding of the Saudi concerns over perceived threats from Iran and is committed to supporting the social reforms undertaken by the Crown Prince.

Seen in this broader context, Modi's resounding election victory should boost the Indo-Saudi relations and transform the Kingdom into being a pivot to New Delhi's Middle East policy.

He is the co-author of India's Saudi Policy: Bridge to the Future published earlier this year by Palgrave Macmillan. The views expressed are personal)