Shripad Naik all set to break free of Parrikar's shadow 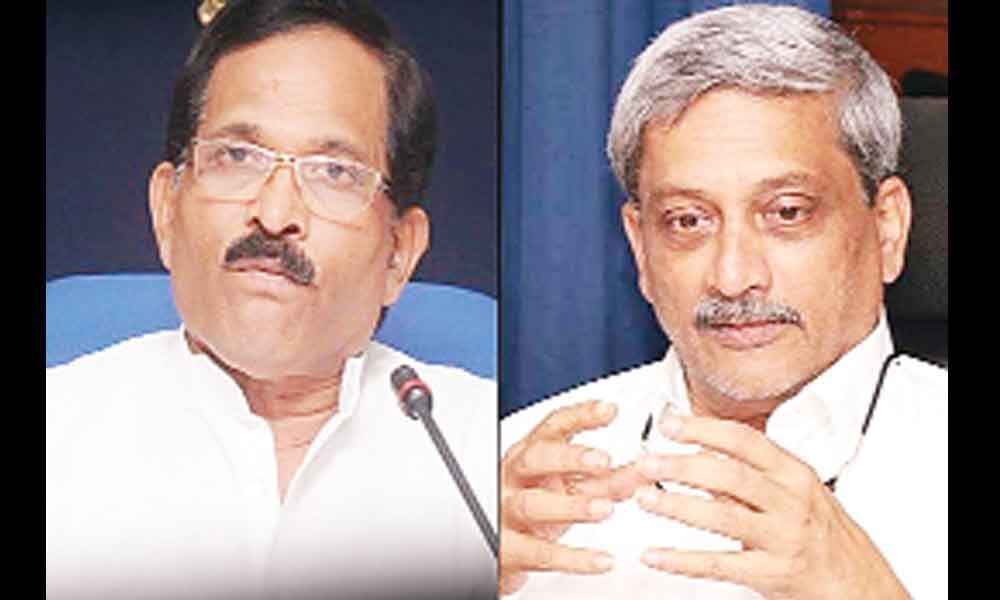 Dwarfed more often than not by his peer, but more importantly Goa's tallest BJP leader late Manohar Parrikar, the April 23 Lok Sabha polls offers Union Minister of State for AYUSH Shripad Naik the first opportunity to break free of the shadow of the four-time Chief Minister.

Dwarfed more often than not by his peer, but more importantly Goa's tallest BJP leader late Manohar Parrikar, the April 23 Lok Sabha polls offers Union Minister of State for AYUSH Shripad Naik the first opportunity to break free of the shadow of the four-time Chief Minister.

"We all know what a great leader Parrikarji was. There is a vacuum which hid death has left behind and we are all trying our best to fill it up. This is our first election without his presence, but I am sure our party workers and leaders will keep his memory in their mind and word doubly hard," Naik told IANS as he set out on the campaign trail.

Naik is a four-term MP and is now seeking a fifth term in the Lower House, but this is the first time, that he is entering battle without the company of BJP's Krishna-for-all-seasons, Parrikar, a cause of perceptible worry for the senior leaders of the party.

Facing him is state Congress president Girish Chodankar, who has been parachuted from his home-base - the South Goa Lok Sabha constituency - specifically to take a shot at pulling down BJP's Goliathan contestant.

The battle appears particularly tough for Naik this time round, with the party demoralised due to various factors ranging from the death of Parrikar and disenchantment within a faction of the BJP, which was close to the late Defence Minister, with Naik's performance.

A recent video where Parrikar's nephew is heard criticising Naik for his inaccessibility and non-performance, exposed the cracks in the party cadre's support for Naik, who at 66, is one of the seniormost party leaders.

Chief Minister Pramod Sawant however insists that Naik's victory is beyond doubt, thanks to his humility, efficient disbursal of MPLAD funds and of course the 'Modi-wave' gripping the country.

"The Congress candidate should now think about contesting the upcoming bypoll in Panaji, because as far as I am concerned, Shripad Naik is winning the North Goa seat hands down," Sawant said.

For 52-year-old Girish Chodankar, on the other hand, this contest is the second high high-profile electoral - he unsuccessfully contested the assembly bypoll against Parrikar in 2017 - a test which will help him earn credibility in Congress ranks, which has four Chief Ministers in the party's legislative ranks and where the former school teacher is considered a lightweight.

The main poll plank for Chodankar, is what he claims, is the consistent failure of Naik as a four term MP, who the Congress leader says faces unprecedented anti-incumbency. "All I have to do is point out to his failures as MP.

He has failed to raise legtimate issues related to the state in Parliament as MP and in the Union cabinet as central minister," Naik said.

The issues which concern the constituency include the inability of the BJP-led governments in the state and at the Centre, to restart Goa's iron ore mining industry, which was banned by the Supreme Court last year. In North Goa, the mining leases are spread over five Hindu-dominated assembly segments, whose economy has been paralysed due to mining inactivity.

"Shripad Naik could not even get an appointment with the Prime Minister for the mining dependents who wanted to meet Modi for over one year," Chodankar said, even as Naik insisted that only a BJP-led government at the Centre would be able to resolve the state's mining deadlock.

The two other factors which are likely to hamstring Naik's campaign this time round, are the potential backlash of the minority communities over the pan-India chorus about lynchings and beef-related killings and harassment and locally speaking, the threat of an aggrieved Maharashtrwadi Gomantak Party, a regional outfit which also appeals to the Hindu conservative voter.

Last month's midnight raid by the BJP on MGP's legislative unit, which poached two out of its three MLAs, has had the MGP fuming and mouthing retribution.

The Congress' key worry could be the suspect loyalties of its own MLAs, two of whom joined the BJP last year and at least two others who are in constant talks with the saffron party, vis-a-vis a hop over the political fence.

Out of the other four candidates, two of whom are independents, the presence of Aam Aadmi Party's Pradeep Padgaonkar could result in hiving off of some of the Congress's minority and 'secular' votes, because of the penchant which a section of Goa's Catholics appear to have developed for Delhi Chief Minister Arvind Kejriwal's party, along with a tiny fraction of the intelligentsia.