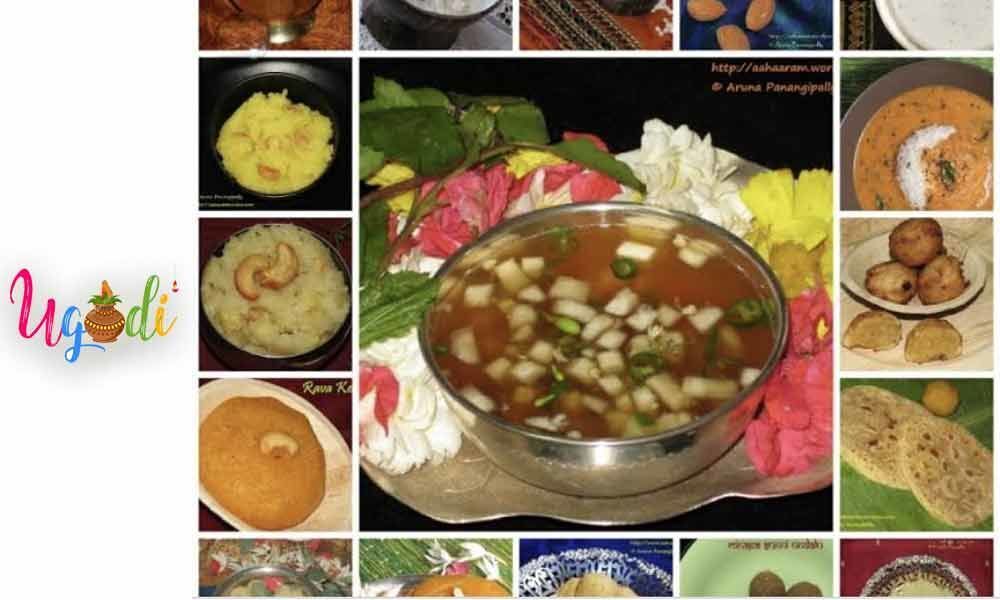 Ugadi is the New Year's Day for the people of Andhra Pradesh, Karnataka and Telangana states in India

Ugadi is the New Year's Day for the people of Andhra Pradesh, Karnataka and Telangana states in India. It is observed in these regions on the first day of the Hindu lunisolar calendar month of Chaitra. Which falls in March or April of the Gregorian calendar.

The day begins early; Women and men have an oil bath, usually with sesame oil, the following visit a temple to pay their respects to the local deity.

One of the highlights of Ugadi celebrations in Andhra Pradesh is the reading out of the almanac or the Panchangasravanam by the learned priests who also make predictions for the coming year. Traditionally, this reading out would happen in a temple or a village square but today, all you need to do is turn on your television set!

Like with every festival, Food is an integral part of Ugadi celebrations.

If you want to experience the real Traditional Ugadi celebration in Hyderabad, here you go..As I was desperate to capture the flavor of the festival, I Started to a near endeavor and try my luck to the outskirts of Hyderabad.

Ugadi comes from two Sanskrit words Yuga i.e the ERA and add the BEGINNING. Ugadi marks the first day of the year according to Saka calendar.

I started the very early Morning; The sky with rising sun was beautiful.

For most of the people, it is celebrating time but for farmers, it is the time to reap what they sowed-its the harvest festival.

I saw this farmer getting and started his work of reaping the very early morning very the rest were celebrating. The smell of the fields was enchanting.

Every house has Muggu, MUGGUis a painting drawn with rice powder or chalk powder in Indian houses. These are thought to bring prosperity to a home. in the olden days, they were used to be drawn with coarse rice powder which served as food for the ants, birds and other creatures. This is also a welcome sign to the Godess Lakshmi.

Since this is the first day of the year all house and shops were decorated with Mango leaves.

In the villages, there were lots of cattle sheds and lots of buffaloes.

I have been to one of the village houses. They all were very neat and clean. The floor is waxed with cow-dung which is considered to have antiseptic properties and keeps the house free from disease.

They served us Ugadi pachadi (Literally a sauce in telugu) is an essential part of Ugadi. A sweet and sour pachadi or chutney made of tantalizing ingredients like raw mango, tamarind, jaggarey and neem flowers.

Ugadi Pachadi is one of the most important ugadi recipies that is prepared on the day of ugadi and is offered to Gods seeking blessings for the year ahead.

The first food we consume on the day of ugadi after offering it to god is Ugadi Pachadi.

Ugadi Pachadi signifies that life is a mixture of happiness, sadness, anger, disgust, fear and surprise

1 Sweet taste comes from jaggery and it symbolizes happiness.

2. Astringent or pungent taste that comes from raw mangoes and it symbolizes support in life.

3. Bitter taste that comes from neem flowers represent the sadness.

4. Sour taste comes from the tamarind and symbolizes unpleasantness.

5. Salt taste is from salt and represents fear of the unknown phase.

6. Hot or spice comes from pepper and symbolizes anger.