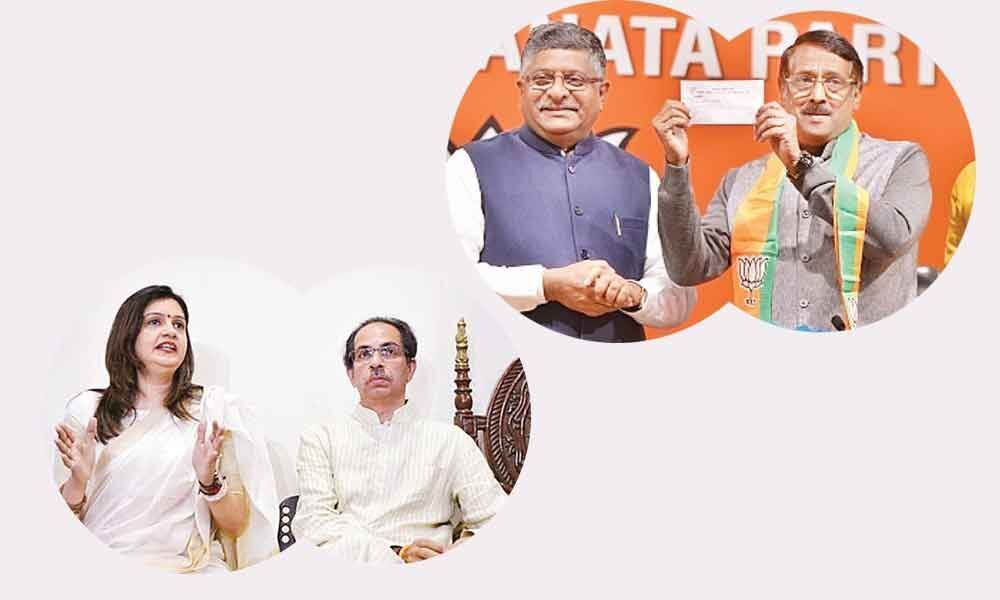 The party spokespersons who do not generally come from grass root level are given the thankless job of defending the party which they represent like the character "Jai" (played by Big B) in the blockbuster film Sholay.

The party spokespersons who do not generally come from grass root level are given the thankless job of defending the party which they represent like the character "Jai" (played by Big B) in the blockbuster film Sholay.

Whenever such spokesperson switch sides, since they are not mass leaders parties don't see any harm but at the same they get used by parties where they join to attack the party from where they came.

In 2017 the loud mouth SP spokesperson Gaurav Bhatia who was defending their party until last day of pooling in UP, suddenly crossed over to BJP and was made to bash his parent party and sometimes he can seen mixing up names and attacks.

After a break it was the turn of Congress ageing spokesperson Tom Vadakkan who is mostly based himself in Delhi with little support from his home town switched over from Congress to BJP.

Though yet to get a chance to speak for BJP as it requires a lot of time for him to learn to speak for a party whose antipathy towards Nehru family is well known and he may himself feel bit awkward.

Now another classic case of mismanagement of good human being by age old and sagging INC has led the articulate spokeswomen Priyanka Chaturvedi has switched over to Shiv Sena.

She has claimed that the Congress party has not taken tough stand against some goons who misbehaved with her some months back when went to Mathura to address a press conference on Rafale. Though party suspended those members , keeping any on crucial UP elections, these member have been taken back.

Such action in BJP or other party would be termed as "Realpoltik" and Congress may have learnt it from the ruling party. In spite of this I can say that Congress has mishandled the issue and in the process handed an articulate person on a silver platter to Shiv Sena which has no shortage of goons.

Welcoming her in its fold Shiv Sena chief has claimed that the she would be given a responsible position in the party and on the other hand he would allow BJP to use her to attack Congress which has already begun right earnest.

It is a fact that youngsters who are in Congress are indeed look for career growth in the same way like working in a company. When they see better offer and opportunity they seem to more pragmatic. Shiv Sena may give her a ticket for assembly seat in the constituency where she has worked.

However, considering nature Priyanka Chaturvedi may turn out to be a misfit in Shiv Sena and may end up like jumping from frying pan to fire.

It would be good youngsters like Priyanka should considering establishing a school for Spokesperson to train them History, Geography, history of political parties, sloganeering, art of defending without offending other parties, may be a bit of martial arts for use when facing rough spokespersons.