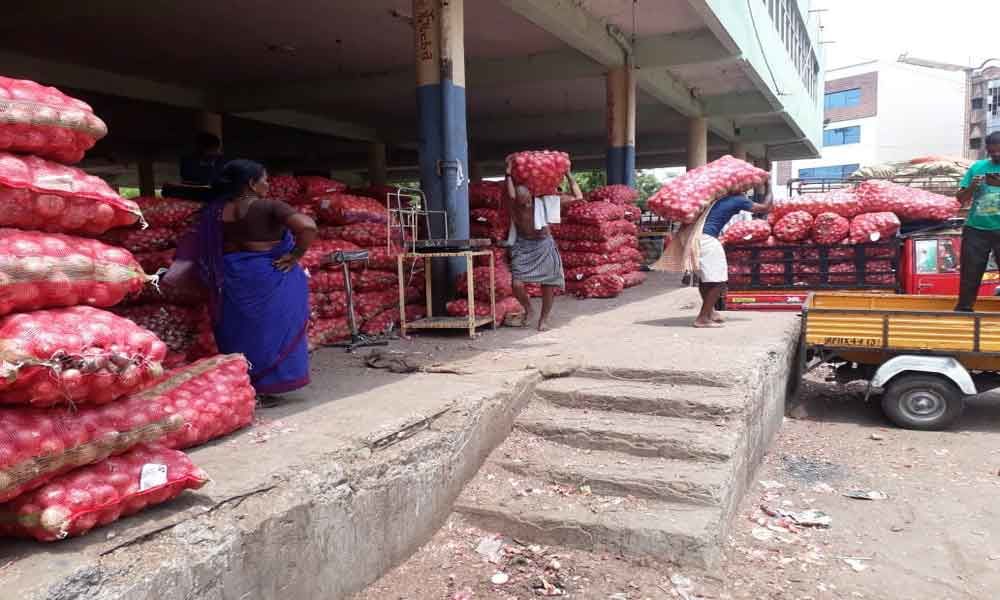 With the monsoon setting its foot in Telangana, the time has come to grab the best opportunity to buy the fresh agricultural produce like delicious...

Malakpet: With the monsoon setting its foot in Telangana, the time has come to grab the best opportunity to buy the fresh agricultural produce like delicious onions, which are otherwise known as an important part of the staple food.

A huge stock of fresh onions hit the major city market at Malakpet this June. Every year, it continues till January. As such, the best time to purchase this veggie sans any tears rolling down from the cheek (which generally said when prices are high) and with full price satisfaction, starting from June. Onion is one vegetable that is widely cultivated during Kharif season.

The crop, which gained prominence for its taste among all other vegetables and considered as an important ingredient in curries and soups, is harvested twice a year. Presently, the vegetable price in the market stands at Rs 20 per kilo and given an indication of price is under control.

"Onions largely come from states like Maharashtra, Karnataka, Madhya Pradesh and Andhra Pradesh, where it is cultivated in a large scale. Telangana too cultivates onion, but in a small scale due to various tropical and environmental reasons. Although the fresh produce from neighbouring states starts reaching the city markets from June itself, the local produce of Telangana touches the ground in July," said J Anantaiah, Selection Grade Secretary Agricultural Market Committee in Malakpet.

India is the second largest producer of onion in the world, next only to China. However, the productivity of onion in India is very low i.e., 14.21 tons/ha as compared to China and other countries like Egypt, Netherlands and Iran. The major onion producing states in the country are Maharashtra, Madhya Pradesh, Karnataka, Gujarat, Rajasthan, Bihar, Andhra Pradesh, Haryana, West Bengal, Uttar Pradesh, Chhattisgarh, Odisha, Tamil Nadu, Jharkhand and Telangana.

"Every day, 30 to 35 lorries reach the market that accounts for 10,000 to 15,000 bags altogether. On Monday, the market receives 73 vehicles of load, of which 65 trucks are from Maharashtra, five are from Madhya Pradesh and 3 are from Karnataka. The increase in the number of onion laden trucks registered on Monday is due to holiday, a day earlier. However, the routine capacity of loads from other states is 30 to 35 trucks only," he added.

The cultivation of onion starts in Kharif season and within a span of 45 days the crop is ready to harvest. "In Telangana, erstwhile Mahbubnagar and Rangareddy districts are the core areas of onion cultivation. Presently, Mahbubnagar, Nagarkarnool, Tandur and Shankerpally are the areas wherein onion crop is being taken up by the local farmers," said A Chandrashekhar, Secretary (Grade-I) Agricultural Market Committee Malakpet.

As a conservative estimation, he said, the market received Rs 7 crore of produce on Monday from different states. "Presently, the prices are ranging from Rs 400 to Rs 1,700 per quintal in the market based on the variety and standard of the agricultural produce. As such, the onions are up for grabs in various places in the city just for Rs 20 per kg.

"With the passing month of June, the fresh stock of veggies is up for grabs in the markets in the city. It is quite reasonable to say that the prices are fully under the ambit of the purchasing power of the commoners," said Mohammed Asad, an onion Trader.