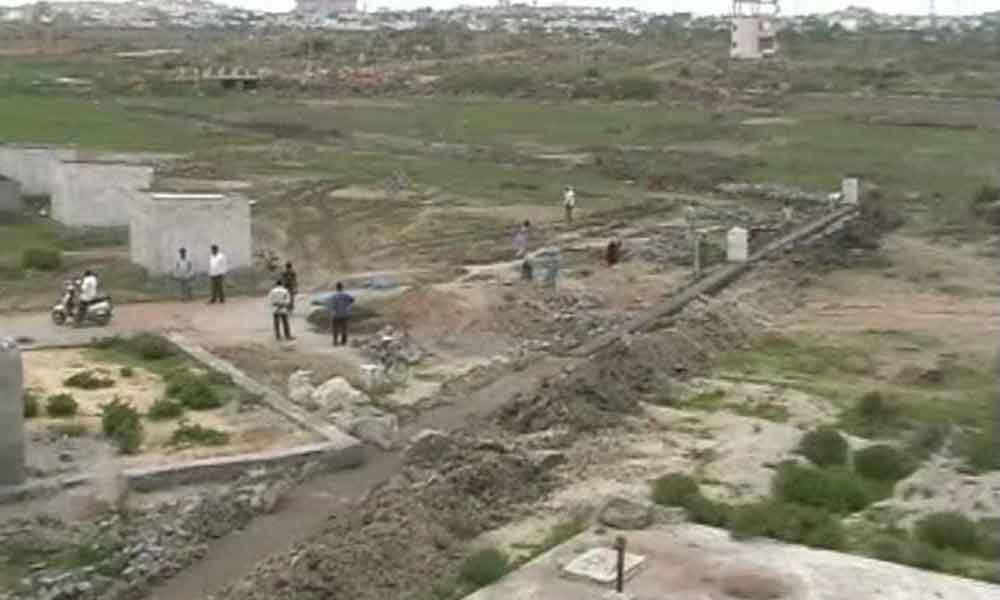 The groundwater level is depleting at a faster pace. Advice and recommendations given by the groundwater experts are being neglected to a large extent.

Quthbullapur: The groundwater level is depleting at a faster pace. Advice and recommendations given by the groundwater experts are being neglected to a large extent. Harvesting rainwater is also going on nominally.

TRS Working President K Taraka Rama Rao (KTR) has strictly told officials to protect tanks in the city limits. But, neither the officials nor the public representatives seem to bother about the tanks. Even worse, new structures are being erected in the areas that are under the buffer zones of the tanks.

A new building is being constructed in Hanuman Nagar, which is near Quthbullapur revenue office. The area where the construction is happening comes under the buffer zone of Pedda Cheruvu.

Surprisingly, the GHMC officials have granted permission for the construction of a building at this prohibited area. When the issue was taken to the notice of GHMC officials, they simply said that they had granted permission because Land Regularisation Scheme (LRS) was in force. No officer seemed to have taken the demands of the activists seriously. And no action was taken against any municipal employee.

Several houses were also constructed on FTL pillars 4, 5 and 6. Though the issue has been taken to the notice of officials concerned since over one year, nothing positive has been done, so far. Activists are questioning as to what the officials of Revenue, Irrigation, and GHMC had been doing on the issue. Is it not the responsibility of the officials to protect tanks and implement experts' advice? the activists ask.

City Planner for Kukatpalli zone Pradeep Kumar has also issued written orders to the GHMC town planning officers of Quthbullapur to cancel all the permissions in the FTL & buffer zone areas. But no action has been taken, so far.It is alleged that the chainmen visiting the field for fact-finding instead of section officers is another reason for illegal construction. Activists demand a strong action against the persons who resort to illegal constructions, as well as the officials who colluded with them.