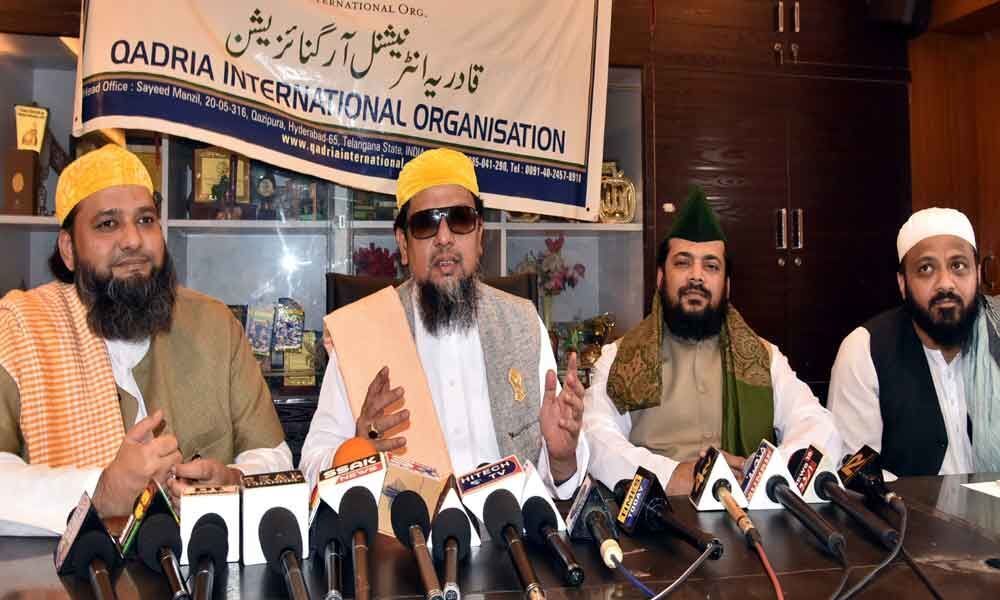 Muttahida Majlis e Mashaikh, an umbrella organization of Islamic Sufi scholars, organised a protest against mob lynching incidents across the country at its headquarters of Quadria international Organization at Shalibanda in Old city.

Charminar: Muttahida Majlis e Mashaikh, an umbrella organization of Islamic Sufi scholars, organised a protest against mob lynching incidents across the country at its headquarters of Quadria international Organization at Shalibanda in Old city.

The board representatives and members condemned the gruesome and barbaric acts of anti-social elements and demanded an immediate action by the governments at national and state level.

Speaking to media persons, Member & President Qadria International Organization Moulana Syed Ahmed Al Hussaini sayeed'ul Qadri said that mob lynching incidents are unacceptable and they should be brought to an end at the earliest. He demanded that the Chief Justice of India should intervene and issue a suo-motto petition on the issue and also issue immediate directions to the central government to stop such incidents.

Moulana Syed Ghulam Samdani Ali Quadri, member & chairman at Seerat'un Nabi Academy, said that India has achieved its independence by the sacrifices of Muslim scholars. He also reminded that the first person who stood for the country's freedom was Allama Fazl e Haq Khairabadi. He pointed out that a particular community cannot claim right over the entire nation, as it equally belongs to all the citizens. He urged the government to take immediate action against the culprits and restore back normalcy in the country.

Moulana Syed Aale Mustafa Quadri, member & presidnet at AIUMB, said that mob lynching is a social menace that is destroying the secular fabric of India. If the issue is not addressed at the earliest, it can paralyse the development of India, the fastest growing economy in the world. He also asked for an immediate amendment in mob-lynching act at the parliament and stressed the government to take stringent action against those involved in these gruesome acts of violence.