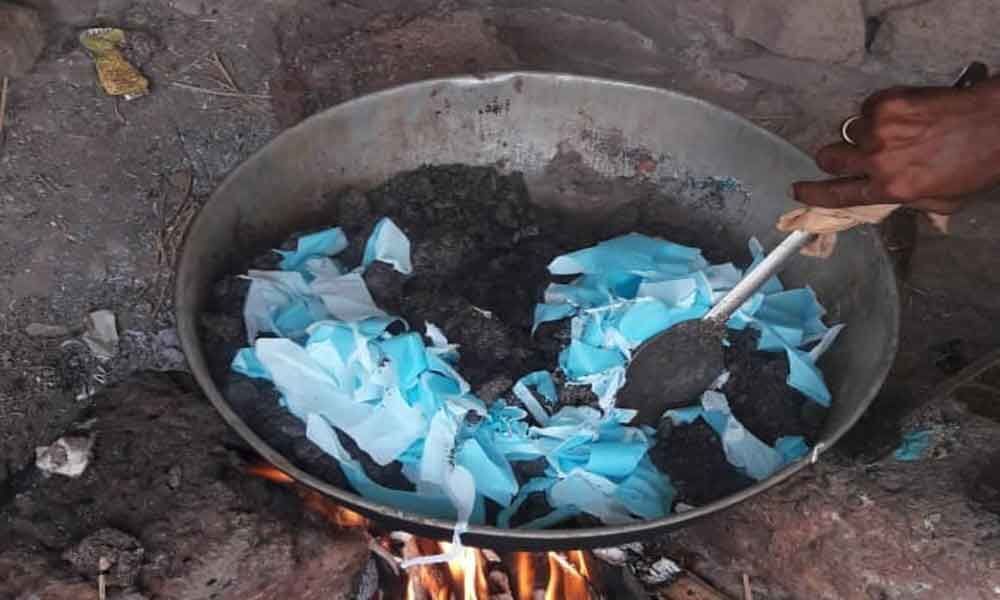 According to the Central Pollution Control Board, over 60% of India’s plastic waste goes for recycling across the country.

Narayankhed: According to the Central Pollution Control Board, over 60% of India's plastic waste goes for recycling across the country. The high-value plastic waste, such as shampoo bottles and PET water bottles, are collected by rag pickers and sold to recycling companies for a tidy sum. However, the dangers lurks in the form of smaller plastic items like biscuit, chips and gutka wrappers, which are often left to accumulate on roadsides, in landfills and garbage dumps, as they are perceived as not worth the effort.

However, Pandu Ranga Rao found a solution for the small plastic debris. Speaking to The Hans India, he said, "The plastic doesn't need to be segregated. Any plastic that is removed from a nala or picked up from roadside can be used for this process. The plastic wrappers are then mixed with mud or sand and heated until it melts and becomes a thick latex kind of paste of mud and plastic."

Ranga Rao said that the mixture of plastic debris and sand or mud after molding is as stronger as cement and can bear the heat up to 120 degrees. Its light weight helps it to be a perfect replacement for flower pots, traffic barricades, and footpath pavement blocks, he said.

"The mixture can later be molded into any desired shape or size, as per one's requirement. The idea came to me when I saw that there were many ways to recycle other plastic items, but smaller plastic items like biscuit, chips or gutka wrappers were hard to recycle. Those wrappers later were used for landfills or were dumped in garbage or nalas. That's when I decided to do something about recycling of these small wrappers," he said.

"It took six months to come up with this idea, but it took me more than a year to think about the procedure. After many failed attempts and a lot of feedbacks, I was finally successful to find a way to reuse these plastic wrappers and debris.

The production cost of each pot is less than a rupee and a single worker can make 1,000 pots a day. This can be a solution for the upcoming plastic problems in many parts of the country. It can be a way to reuse plastic in other different daily household items. Upon heating, the plastic loses its chemical facts and blends in with mud and turns into a different latex-like substance that is environment-friendly," Ranga Rao added.

The recycling method of Ranga Rao was first identified by Brig P Ganesham of Palle Srujana, a voluntary organization that promotes rural innovations. Pandu Ranga Rao was also invited to Rashtrapati Bhavan to receive Visitor's Award in March 2017 for his another innovation of a liquid solution that quickly arrests air leak when rubbed onto any punctured spot.