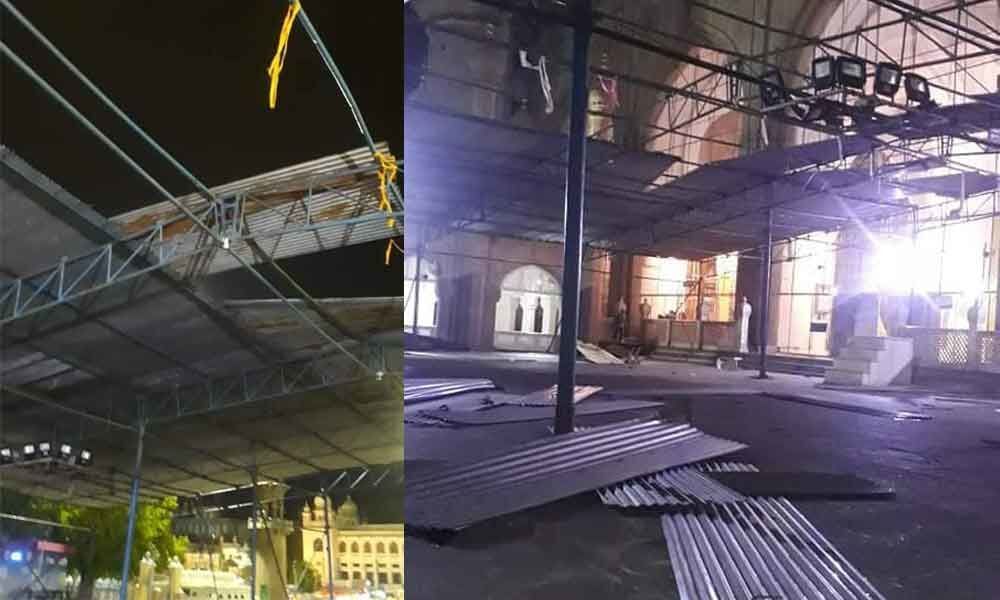 Social activists have demanded probe into the tender process of installation of temporary shed, which was blown away and completely damaged following the rains and gales that hit the city on Monday.

Charminar: Social activists have demanded probe into the tender process of installation of temporary shed, which was blown away and completely damaged following the rains and gales that hit the city on Monday.

Even though there were no causalities reported, the activists have demanded explanation from the TS Wakf Board as to why such a poor quality shed was set up. "Why this shed failed to resist the winds at the historic Mosque. This was nothing but poor-quality material. If any person, a devout or tourist took shelter nearby, he would have been injured fatally," said Shafeeq Ather, a social activist.

Ather alleged that the Wakf Board contractors used poor quality material or unprofessional workers for installation of the shed. He demanded that the State government conduct inquiry into the process of handing over contracts in the Wakf Board.

"All the leaders and higher officials are only seen at the time of Ramzan, while they continue to ignore during the remaining 11 months. They forget to take care of the 400-year-old Mecca Masjid. If this continues, no more heritage structures will remain top priority and will face complete neglect," he added.

Another activist Syed Tajuddin Quadri Al Jilani, while reminding Chief Minister K Chandrasekhar Rao about his promises vis-a-vis Wakf Board before coming to power, described the present state of affairs as the worst in the history. While pointing out as to why the Wakf Board failed to install a strong shed similar to that of Shahi Masjid, Public Garden, the social activist wondered about the entire tender process in this case.