US actions against cause of Palestine condemned 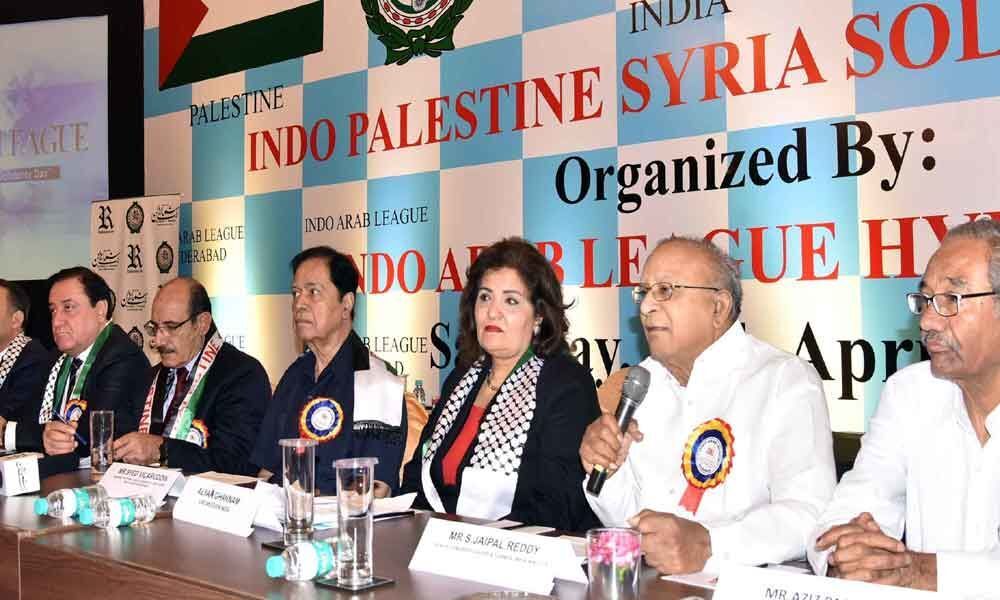 x
US actions against cause of Palestine condemned
Highlights

While strongly condemning the US declaration of recognising the part of occupied-Syrian territory, the Golan Heights, as part of Israel, ambassadors and diplomats of Arab countries described the Trump’s announcement as a ‘pseudo-legal facade for unlawful colonisation.’

Hyderabad: While strongly condemning the US declaration of recognising the part of occupied-Syrian territory, the Golan Heights, as part of Israel, ambassadors and diplomats of Arab countries described the Trump's announcement as a 'pseudo-legal facade for unlawful colonisation.'

Addressing a programme on the topic, 'Indo Palestine Syria Solidarity Day,' organized by Indo-Arab League Hyderabad in the city on Saturday, Head of Mission League of Arab States Alyaa Ghannam assured that the Indo-Arab League believes that Palestine is at the core of Israel-Arab conflict and hoped that peace would prevail in the near future.

Palestine Ambassador Dr Adnan Abu Al Haija said all the decisions of Trump, including the recognition of Jerusalem as the capital of Israel and the Israel sovereignty at the Syrian Golden Heights are against the international law and the resolutions of United Nations.

The Palestine ambassador also expressed apprehensions of annexation of West Banks by Israel, and assured that Palestine would continue to fight for its right. He also criticised the United States' decision to shut down Palestine Liberation Organization (PLO) office in Washington and the withdrawal of funding given to Palestinian hospitals and Palestine National Authority. He thanked the Indian government for 'remaining steadfast since inception' toward the cause of Palestine.

Expressing solidarity with the Palestinian people, former Union Minister Jaipal Reddy said he is 'a strong sympathizer of Palestine'. "In the last 70 years since World War II, no country and no people in the world have been subjected to such unprosecuted torture. It is a matter of shame that 'so-called' developed nations help Israel in the process".

Jaipal Reddy said, "The European nations, including UK, France and Germany, have distanced themselves from America and are no longer supporting the policies of America." He termed "the disunity among Arab nations as the greatest weakness," adding that after South Africa, "Palestine represents the worst case of international justice."

Vicaruddin, chairman at Indo Arab League Hyderabad, said, "The Indo-Arab League Hyderabad condemned the continued atrocities by the Zionist forces on Palestinians, in particular, and on the Arab world in general. He also vehemently opposed and out-rightly rejected US President Donald Trump's announcement labelling it as "unethical, arbitrary, unilateral, unlawful and discriminatory" and "a blatant reversal of more than half-a-century of US policy in the Middle East."