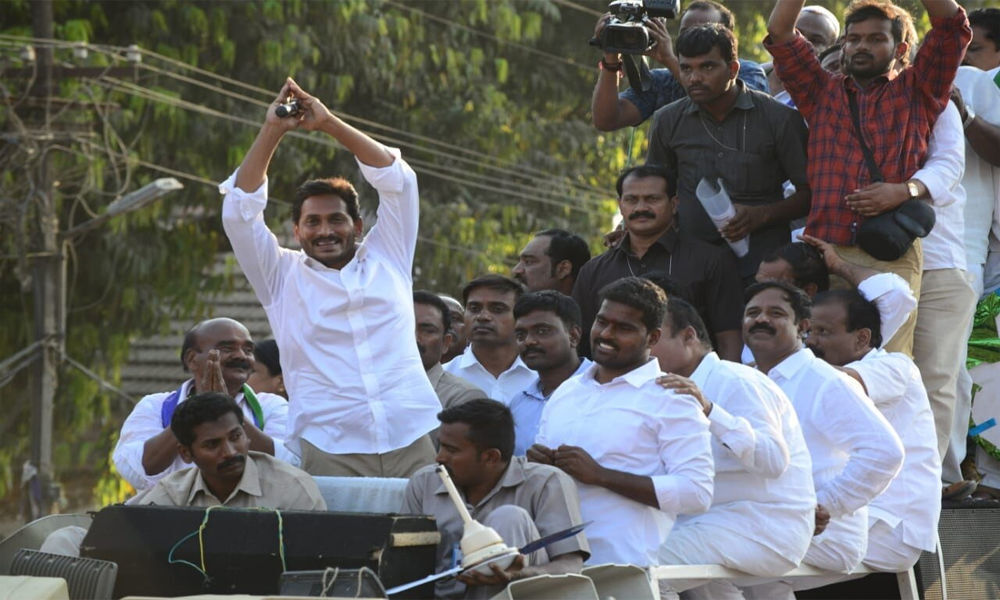 Alleging that the state had not witnessed such lawlessness, YSR Congress Party president YS Jaganmohan Reddy called upon the people to bring an end to the barbaric rule of Chief Minister N Chandrababu Naidu in the ensuing election.

Tirupati: Alleging that the state had not witnessed such lawlessness, YSR Congress Party president YS Jaganmohan Reddy called upon the people to bring an end to the barbaric rule of Chief Minister N Chandrababu Naidu in the ensuing election.

Speaking at a party election meeting at Palamaner, 110 km from here on Wednesday, Janganmohan Reddy comparing Chandrababu Naidu rule to like that of Sisupala, urged the people to take the role of Lord Kirshna in the election to end the five-year demonic rule affecting everyone in the state more so the poor and voiceless.

The YSRCP chief recalled the various incidents, including the call money racket, sand mafia attack on public, including ruling MLA attacking tahsildar Vanajakshi and also murder of YSRCP activists in various districts and said the government instead of taking stern action against the culprits involved in the brutal incidents allowed them to go scot-free deterring the upright employees and also panicking the common people in the state.

While the protests by the victims of AgriGold, Anganwadi workers, contract employees, Nayee Brahmins, Kapus and others seeking solution of their issues were dealt ruthlessly by unleashing the police attacking the peaceful demonstrators, he said, reiterating that the state was a witness to atrocious rule since the TDP came to power.

Ruling TDP cheated the farmers and women by not keeping its promise of waiving their loans, Jagan said, assuring that his party would waive the entire loans in four instalments immediately after coming to power and sought the voters to bear with the present rule for 20 days.

"They go on repeating their ruthless acts, injustice, cheating and corruption but play dramas after dramas, spin stories after stories to cover up all their misdeeds and misrule,'' he said warning the public against believing TDP which he said did not cease from beguiling the people of state.

Jagan also alleged that TDP which went on with sops after sops just a month before the election notification to hoodwink the people is now readying to send money bags to villages to entice the voters in the election to win the poll at any cost.

Terming the ensuing election as a battle between Dharma and Adharma, he exuded confidence that the people will adhere to values and ethics to see Adharma is wiped out soon.