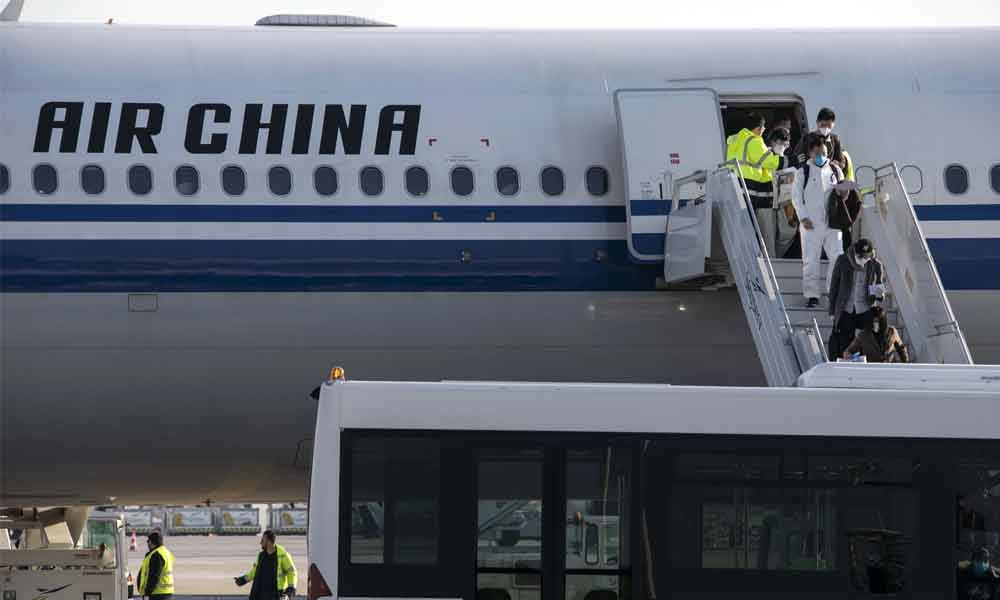 Members of a Chinese aid mission wearing protective masks disembark from an Air China aircraft at Eleftherios Venizelos International Airport in Athens on Saturday. China has sent medical supplies to Greece, including hundreds of thousands of surgical and protection masks. For most people, the new coronavirus causes only mild or moderate symptoms. For some it can cause more severe illness
Highlights

China has not reported any local coronavirus cases for the third consecutive day but the country is facing a sharp increase of COVID-19 cases from...

Beijing : China has not reported any local coronavirus cases for the third consecutive day but the country is facing a sharp increase of COVID-19 cases from abroad, a health official said on Saturday.

The coronavirus death toll has gone up to 11,397 with more than 275,427 cases reported in over 160 countries and territories, according to data from Johns Hopkins University.

Italy has overtaken China as the worst-hit with over 4,000 deaths reported so far. The NHC said on Saturday that no new domestically transmitted cases of COVID-19 were reported on the Chinese mainland for the third day in a row on Friday.

On Friday, seven deaths and 36 new suspected cases were reported on the mainland, with all the deaths reported from the virus' epicentre Hubei province and its capital Wuhan, it said.

The overall confirmed cases on the mainland have reached 81,008 by the end of Friday, which included 3,255 deaths, 6,013 patients still undergoing treatment, 71,740 patients who have been discharged after recovery, the NHC said.

He said the total number of imported cases to the Chinese mainland increased by 216 per cent to 269 from March 11 to 20.

He also noted that the mainland reported no new domestically transmitted COVID-19 cases for the third day in a row on Friday, and provincial-level regions except the hard-hit Hubei province had been clear of indigenous cases for nine days. He called for unswerving efforts in preventing the COVID-19 epidemic from rebounding.

The NHC said 41 new confirmed COVID-19 cases were reported on the Chinese mainland on Friday from the people arriving from abroad, taking the total number of imported cases to 269.

While reporting about a steady increase in imported cases, the NHC did not specify whether the infected persons were foreigners or Chinese nationals returning from abroad.

China has imposed strict quarantine measures for all those returning from other countries. Hong Kong reported 17 additional confirmed cases of COVID-19 and 20 preliminary positive cases on Saturday.

With the 17 newly confirmed cases, the total number of confirmed COVID-19 cases in Hong Kong has risen to 273.

Meanwhile Wuhan, which is under lockdown since January 23 as part of attempts by the government to isolate the COVID-19 epidemic, will reopen commercial outlets to residents in an orderly manner, local authorities said.