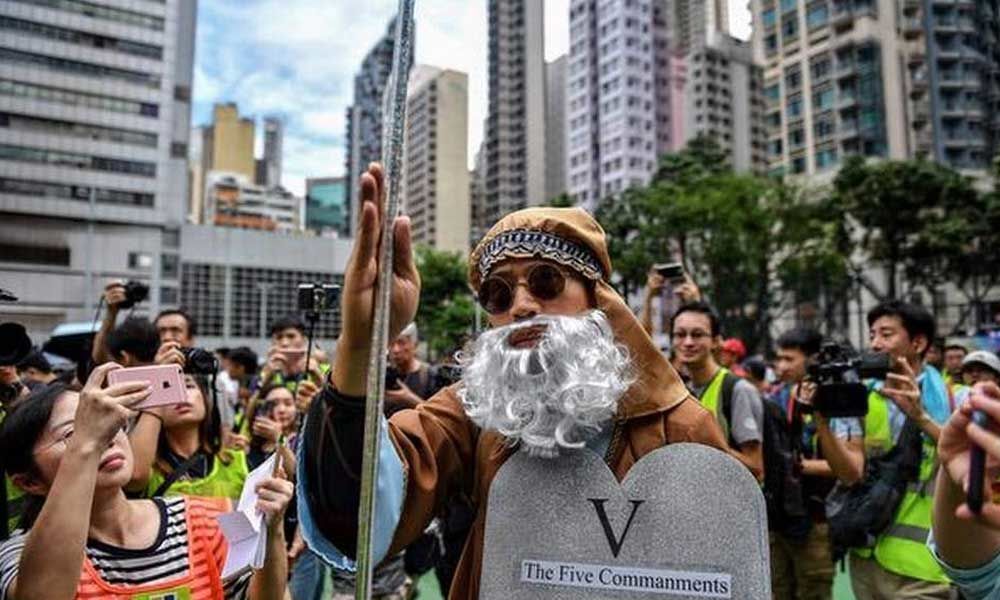 Thousands of pro-democracy protesters defied a police ban on rallying in Hong Kong on Saturday, a day after several leading activists and lawmakers were arrested in a sweeping crackdown.

Hong Kong: Thousands of pro-democracy protesters defied a police ban on rallying in Hong Kong on Saturday, a day after several leading activists and lawmakers were arrested in a sweeping crackdown.

Police banned a planned demonstration on security grounds after last weekend saw some of the most violent clashes in three months of political turmoil but nevertheless warned residents to expect "severe disruption". Police erected fresh barricades near the highly guarded Liason Office -- the department that represents China's central government -- and water cannon were driven onto the streets in anticipation of renewed clashes. By early afternoon, a few thousand protesters in their signature black t-shirts had filled an outdoor sports ground in the city centre, with some marching through surrounding streets. In an attempt to sidestep the protest ban, crowds carried crosses and sang "hallelujah" after calling on protesters to form religious gatherings, which do not require the same stringent permission from authorities.

The now-cancelled demonstration was to mark the fifth anniversary of Beijing's rejection of a call for universal suffrage in the semi-autonomous city, sparking the 79-day Umbrella Movement in 2014. Protesters are reeling after at least five high-profile activists and three lawmakers were arrested one after the other on Friday on accusations linked to the unrest, in a sweep that lasted late into the night. Two of the Umbrella Movement's leaders, Joshua Wong and Agnes Chow -- both still well-regarded among the city's youth -- were arrested in early morning swoops and appeared later in court accused of "inciting others to take part in unauthorised assembly" among other charges.

Wong railed against the "chilling effect" of the round-up of opponents of Hong Kong's Beijing-backed government but vowed to continue fighting. The European Union's diplomatic chief Federica Mogherini said the developments were "extremely worrying". And US President Donald Trump said Washington's economic pressure on China was responsible for preventing the authorities from carrying out a harsher crackdown against demonstrators. Amnesty International decried the "ludicrous dawn swoops", describing them as "scare tactics straight out of Beijing's playbook".

Since an appealing hearing on Friday morning confirmed the rally ban, demonstrators have been discussing online how to continue supporting the movement while avoiding being arrested for illegal assembly. The demonstrators, who have earned a reputation for their creativity, called for "mass shopping trips" in the city centre and religious gatherings to pray for the "sinners of Hong Kong". "The mass arrests yesterday were an obvious tactic to scare us off. Instead, (the government) lures us to come out today and then they can start their second round of mass arrest," said a protester online.

On Saturday morning, LIHKG, the Reddit-like forum used by protesters to communicate, reported via Twitter that its app had suffered the "largest attack it has ever seen". A senior police official said the force remained braced for the possibility of renewed clashes with a hardcore minority of the main student protesters.

Friday saw rolling arrests of leading pro-democracy voices, including three members of the city's parliament -- Cheng Chung-Tai, Au Nok-hin and Jeremy Tam. Cheng's arrest was announced by his Civic Passion party, while police said a 35-year-old man surnamed Cheng had been held over "conspiracy to cause criminal damage" linked to the storming of the city's parliament in July. Police confirmed the arrests of lawmakers Au and Tam for their roles in "obstructing" officers when riot police cleared protesters from the streets of the densely populated Mong Kok neighbourhood on July 7-8. Au is also accused of assaulting a police officer.