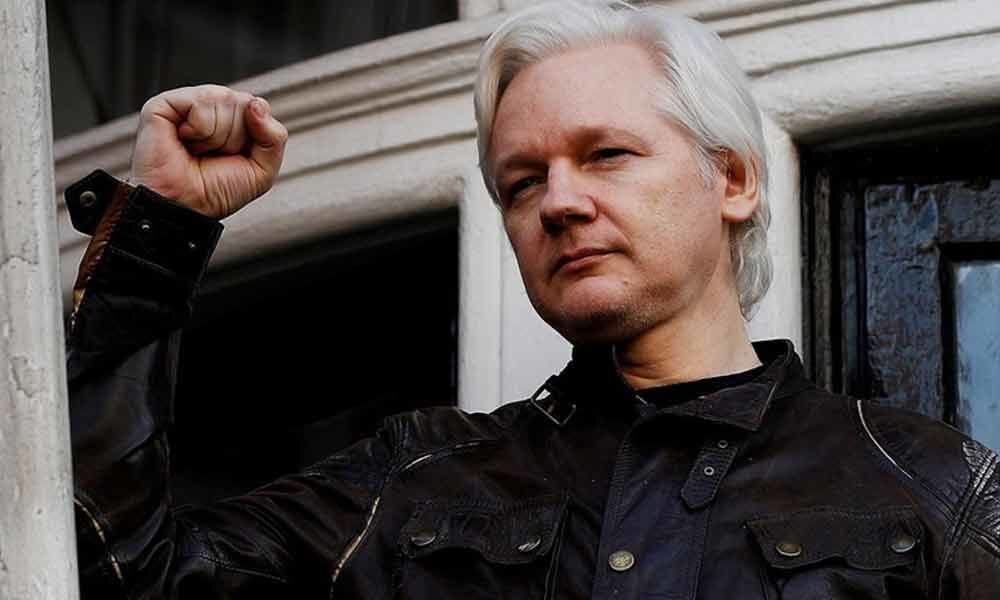 British police dragged Julian Assange out of the Ecuadorean embassy on Thursday after his seven-year asylum was revoked, paving the way for his extradition to the United States for one of the biggest ever leaks of classified information.

LONDON: - British police dragged Julian Assange out of the Ecuadorean embassy on Thursday after his seven-year asylum was revoked, paving the way for his extradition to the United States for one of the biggest ever leaks of classified information.

The frail-looking WikiLeaks founder, with white hair and a long beard, was carried head first out of the embassy in London shortly after 0900 GMT by at least seven men to a waiting police van, after shouting "This is unlawful, I'm not leaving."

British Prime Minister Theresa May hailed the news in parliament, to cheers and cries of "Hear, hear!" from lawmakers.

"The whole House will welcome the news this morning that the Metropolitan Police have arrested Julian Assange, arrested for breach of bail after nearly seven years in the Ecuadorean embassy," May said.

Appearing before a London court, Assange said he was not guilty of failing to surrender in 2012. District judge Michael Snow, who cast Assange as a "narcissist", convicted him of skipping bail. Sentencing will be at a later date.

Assange's lawyer in Quito said his life would be in danger if he were to be extradited to the United States.

Police said they had arrested Assange, 47, after being invited into the embassy following the Ecuadorean government's withdrawal of asylum. Assange was carried out of the building carrying a copy of Gore Vidal's "History of The National Security State", which he continued reading in court.

The arrests, after nearly seven years holed up in a few cramped rooms at the embassy, mark one of the most sensational turns in a tumultuous life that has transformed the Australian programmer into a rebel wanted by the United States.

Supporters of Assange, who gave a thumbs up in handcuffs as he was taken from a police station to the court, said Ecuador had betrayed him at the behest of Washington, that the ending of his asylum was illegal and that it marked a dark moment for press freedom.

To some, Assange is a hero for exposing what supporters cast as abuse of power by modern states and for championing free speech. But to others, he is a dangerous rebel who has undermined U.S. security.

Assange made international headlines in early 2010 when WikiLeaks published a classified U.S. military video showing a 2007 attack by Apache helicopters in Baghdad that killed a dozen people, including two Reuters news staff.

The extent of the diplomacy that led to the arrest was not immediately clear. The Kremlin said it hoped his rights would not be violated.

Assange's indictment arose from a long-running criminal investigation dating back to the administration of former President Barack Obama.

It was triggered in part by WikiLeaks' publication in 2010 of hundreds of thousands of U.S. military reports about the wars in Afghanistan and Iraq and American diplomatic communications.

The U.S. Justice Department said Assange was arrested pursuant to the U.S./UK Extradition Treaty, and accused him of involvement in one of the largest compromises of classified information in U.S. history.

The indictment said that Assange in March 2010 engaged in a conspiracy to assist Manning in cracking a password stored on U.S. Department of Defense computers connected to the Secret Internet Protocol Network (SIPRNet), a U.S. government network used for classified documents and communications.

"The charge relates to Assange's alleged role in one of the largest compromises of classified information in the history of the United States," the U.S. Justice Department said.

He faces a maximum penalty of five years in prison if convicted, the department said.

Britain said no man was above the law.

"Julian Assange is no hero, he has hidden from the truth for years and years," British Foreign Secretary Jeremy Hunt said.

Assange took refuge in the Ecuadorean embassy, behind the luxury department store Harrods, in June 2012 to avoid being extradited to Sweden, where authorities wanted to question him as part of a sexual assault investigation.

Sweden dropped that probe in 2017, but Assange was arrested for breaking the rules of his bail in London in connection with the case.

A Swedish lawyer representing the alleged rape victim said she would push to have prosecutors reopen the case, but a retired senior prosecutor and chairman of NGO Victim Support Sweden, said he thought that may be difficult.

Friends of Assange said the solitude he had experienced in the embassy had hurt him most.

"It was a miserable existence and I could see it was a strain on him, but a strain he managed rather well," said Vaughan Smith, a friend who visited Assange. "The thing that was most difficult for Julian was the solitude."

"He was very tough, but the last year in particular was very difficult. He was constantly being surveilled and spied upon. There was no privacy for him."

"Assange's critics may cheer, but this is a dark moment for press freedom," said Edward Snowden, a former U.S. National Security Agency contractor who fled to Moscow after revealing massive U.S. intelligence gathering.

Assange's relationship with his hosts collapsed after Ecuador accused him of leaking information about President Lenin Moreno's personal life.

Moreno said Assange's diplomatic asylum status had been cancelled for repeated violation of conventions. He said he had asked Britain to guarantee that Assange would not be extradited to any country where he might face torture or the death penalty.

"The British government has confirmed it in writing," Moreno said. "The asylum of Mr Assange is unsustainable and no longer viable."