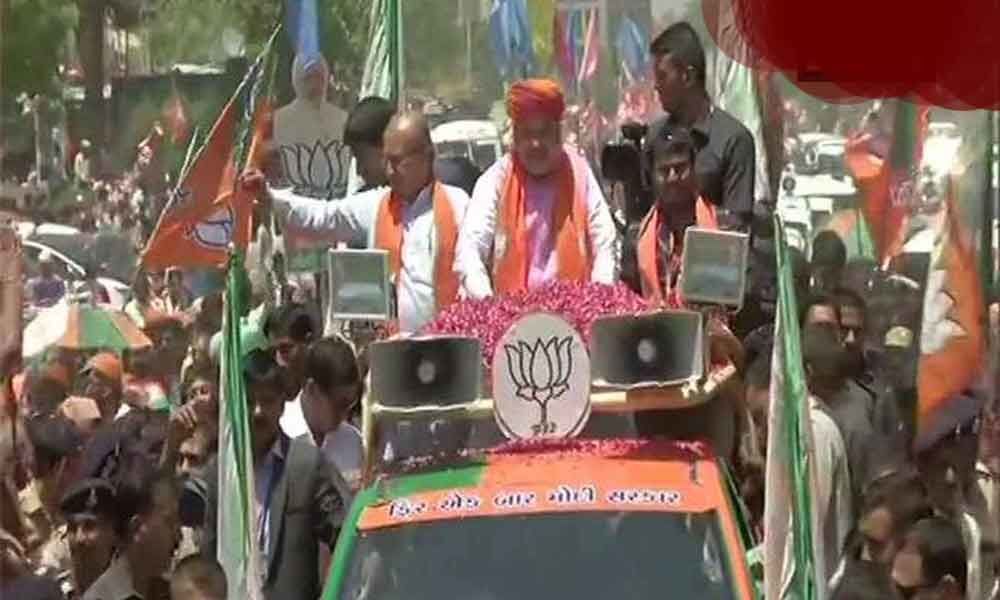 BJP president Amit Shah, who is contesting the Lok Sabha election from Gandhinagar seat in Gujarat, on Sunday embarked on a roadshow in Sanand town here.

Ahmedabad: BJP president Amit Shah, who is contesting the Lok Sabha election from Gandhinagar seat in Gujarat, on Sunday embarked on a roadshow in Sanand town here.

Gujarat BJP president Jitu Vaghani accompanied Shah as he set out on the roadshow from Sanand in Ahmedabad, which falls under the Gandhinagar Lok Sabha seat, in a specially designed open-hood vehicle.

The Sanand Assembly seat, having a significant number of Kshatriya and Koli voters, is currently held by BJP MLA Kanu Patel, who belongs to the Koli community.

Shah was also flanked by state ministers Bhupendrasinh Chudasma, who is a Kshatriya, and Kunwarji Bavalia, who belongs to the Koli community.

A large number of BJP supporters and locals came out on the road to greet Shah.

Before the roadshow, Shah in the morning held closed-door meetings with booth-level party leaders and workers of Ghatlodia, Bodakdev, Thaltej, Vejalpur and Sarkhej wards of the constituency.

Campaigning for the Lok Sabha elections in Gujarat would end in the evening.

All 26 Lok Sabha seats in the state will go to polls on Tuesday and the vote count will be done on May 23.