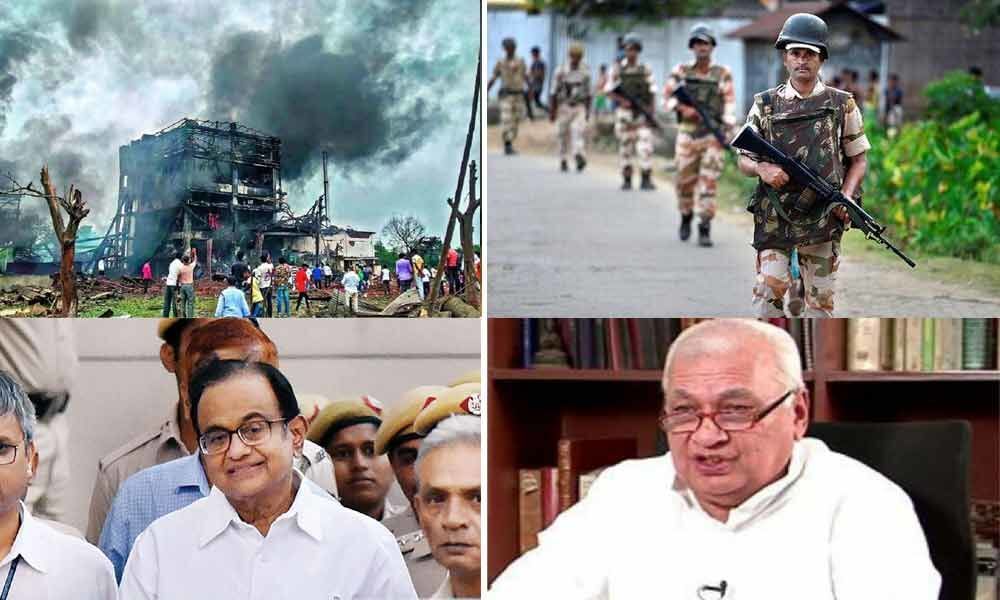 The updated final NRC, which validates bonafide Indian citizens of Assam, was released on Saturday, with the authority conducting the exercise shutting out the citizenship claims of over 19 lakh applicants who now face an uncertain future.

Guwahati: The updated final NRC, which validates bonafide Indian citizens of Assam, was released on Saturday, with the authority conducting the exercise shutting out the citizenship claims of over 19 lakh applicants who now face an uncertain future.

Mumbai: Thirteen workers including six women were killed and 64 others injured in explosions of nitrogen gas cylinders at a chemical factory in North Maharashtra's Dhule district on Saturday morning, police said.

Guwahati: The ruling BJP Saturday said they do not trust the updated National Register of Citizens, specifically prepared for Assam, and appealed the party governments, both at the centre and the state, to make a nationwide NRC.

Sunday New Delhi/Male: India and Pakistan on Sunday had a heated exchange during the South Asian Speakers' Summit in the Maldives after the Pakistani side tried to raise the issue of abrogation of Article 370 provisions on Jammu and Kashmir.

New Delhi: Prominent Muslim face Arif Mohammed Khan, who quit the Rajiv Gandhi government in protest against the enactment of a law to nullify the Supreme Court verdict in the Shah Bano case, was on Sunday appointed as Governor, along with three BJP leaders.

Chennai: Finance Minister Nirmala Sitharaman on Sunday allayed fears of job losses following the proposed merger of public sector banks, saying not even one employee shall be removed following the amalgamation.

Monday Islamabad/New Delhi: For the first time since Pakistan detained Kulbhushan Jadhav in 2016, a top Indian diplomat met him on Monday for two hours and reported that he appeared to be under "extreme pressure" to parrot a false narrative to bolster Islamabad's untenable claims in his case.

New Delhi: In partial relief for P Chidambaram, the Supreme Court on Monday gave protection to the former union finance minister from being sent to Tihar Jail as of now in the INX Media corruption case after he offered to be in house arrest but declined to grant interim bail.

New Delhi: P Chidambaram, as a finance minister during the UPA regime, allegedly committed "serious economic offence" along with his son Karti in the Aircel-Maxis scam and they have to be dealt with "iron hand", the CBI and the ED told a Delhi court while seeking their custodial interrogation.

Tuesday New Delhi/Colombo: A parliamentary delegation from India thwarted Pakistan's attempt to raise the Kashmir issue at a UNICEF event in Sri Lanka on Tuesday, asserting that it was India's internal matter.

Wednesday Batala (Punjab): Twenty-three people were killed and 27 injured in a blast at a firecracker factory located in a residential area here on Wednesday, officials said.

Attari/New Delhi/Lahore: India and Pakistan on Wednesday agreed on visa-free travel by Indian pilgrims to Gurdwara Darbar Sahib using the Kartarpur corridor but stopped short of finalising an agreement on the cross-border route, officials said. Srinagar: The unprecedented telecommunication blackout imposed from the midnight of August 4 may have been eased gradually and the situation in Jammu as well as Ladakh relatively better but an uneasy calm and uncertainty still prevail in Kashmir Valley.

Thursday New Delhi: Former Union finance minister P Chidambaram, who was brought to the Tihar jail on Thursday evening, will get no special facilities, except a separate cell and a Western toilet as specified by the court, prison officials said.

New Delhi: The Supreme Court on Thursday took note of allegations of Muslim parties that many witnesses of Nirmohi Akhara made "tall claims" in their testimonies and asked them whether they still accept that it has rights over the disputed Ram Janmbhoomi-Babri masjid land at Ayodhya.

New Delhi: Former Union finance minister P Chidambaram was put behind bars on Thursday hours after a CBI court sent him to two-week judicial custody in the INX Media case in an unprecedented setback to the Congress veteran who even offered to surrender to the ED in a desperate attempt to be spared the ignominy of going to prison.

Friday Bengaluru: As the nation awaits with bated breath for the soft-landing of the 'Vikram' lander on the south pole of the lunar surface, the first attempt by any country, ISRO said on Friday everything related to the much-awaited touchdown is going as per plan.

Mangaluru: A Karnataka IAS officer resigned on Friday, claiming that the fundamental building blocks of democracy are being compromised in an unprecedented manner, a move that immediately took on a political colour with the Congress seeking to target the NDA government on the issue.

New Delhi: India has been acting with restraint despite "grave provocations" but if attacked will give a reply the aggressor will be unable to forget, Vice President M Venkaiah Naidu said on Friday, in a veiled warning to Pakistan.