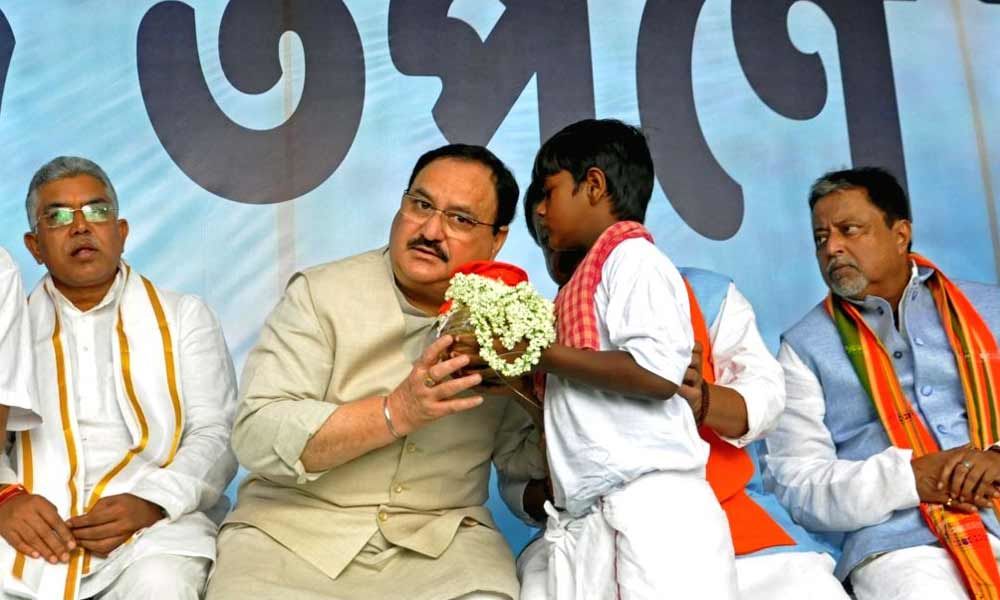 Blasting the Mamata Banerjee government, BJP Working President J.P. Nadda on Saturday alleged that West Bengal was in the grip of "jungle raj" and "state terrorism" with democracy rendered non-functional through "physical liquidation of political opponents".

"There is jungle raj in West Bengal. It is state terrorism. Democracy is not being allowed to function. Democracy is being throttled," Nadda said after performing the Hindu ritual of tarpan -- offering of prayers to the departed -- for party workers killed in political violence in the state recently.

He alleged those opposed to the ruling Trinamool Congress' ideology were being killed.

"Every day, there is physical liquidation of people who have faith in a different political ideology," he told reporters on the banks of the Hooghly river in north Kolkata's Bagbazar.

"There is no law and order. The government which has created a jungle raj is neither upholding the law, nor ensuring judicial remedy. Even justice is not being given to the families of victims".

Nadda, who met the families of the slain political activists, alleged even police complaints were not being filed properly.

"The culprits are roaming openly. Police have become mute spectators. The protector has become the predator. Those who are supposed to be protectors have taken on the job of predators," he said.

Giving details of the atrocities' on his party workers, the senior leader said over 3000 people had to leave their homes and take shelter elsewhere after the panchayat polls last year. Till today, more than 800 of them are living away from their families.

"There have been more than 2500 physical attacks. 80 people have died in violence over the past three years. Around 1000 injured people are under treatment. Their houses have been set on fire. Over 100 BJP offices have been forcibly taken over," he said.

The BJP veteran said the situation was proof that the ground was slipping from under the feet of Chief Minister Mamata Banerjee.

Nadda said he tours the entire country, but has not come across such a situation anywhere else.

He warned Banerjee that the aroma of democracy pervades across India, and anyone trying to destroy it would be finished.

The BJP top gun regretted that Bengal, which earlier occupied a position of pride for its culture, education and arts, has gone into an eclipse over the past 40 years.

Expressing the BJP's determination to bring the state out of the eclipse and restore its old glory, he said: "the jungle raj will end soon.".

Wishing peace to the souls of the political workers of his party killed in violence, he prayed to god for strength to fight the battle for restoring democracy in the state.