BJP will win 22 of Karnataka's 28 seats, Cong-JDS govt may fall after results: Yeddy 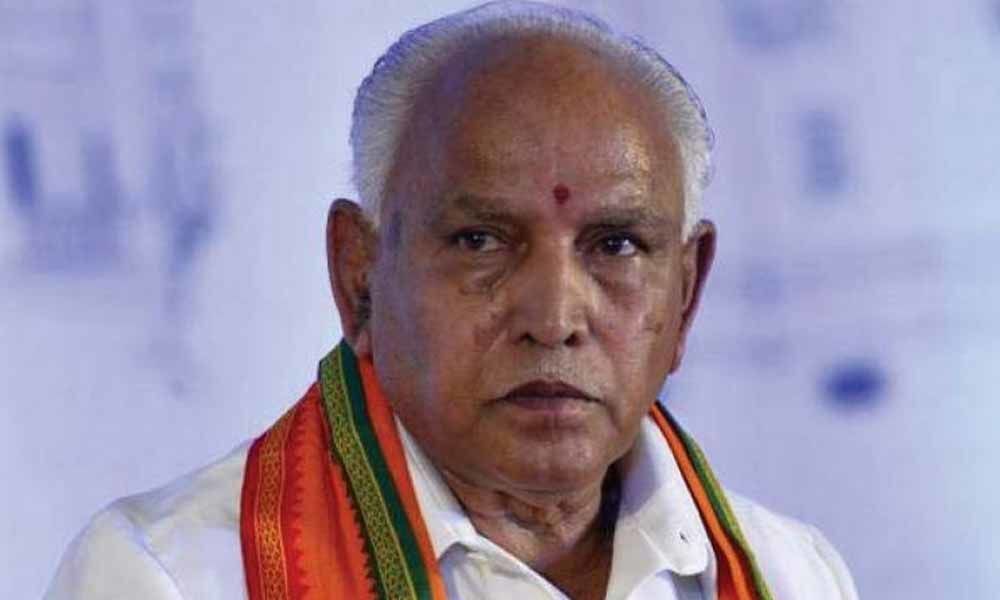 Former Karnataka CM Yeddyurappa claimed there was a "BJP wave" in Karnataka and the party would win 22 of the state's seats.

Bengaluru: Former Karnataka chief minister and state Bharatiya Janata Party chief BS Yeddyurappa on Friday exuded confidence that his party will win 22 of the state's 28 Lok Sabha seats, and claimed the "differences" between ruling Congress and JDS would reach its peak after the results and may lead to the fall of the government.

The 76-year-old leader also said he was not worried about the party "neglecting" him, after stalwarts such as LK Advani, Murli Manohar Joshi and Sumitra Mahajan were denied tickets, and vowed to work for the growth of the BJP regardless of being given any position or not.

"I'm a responsible karyakarta of a national party. Whatever party leadership decides, I will abide by it. I have worked for the party as a common karyakarta for the last 40 years, without any position for the most part of it....in the days to come whether any position is given or not, I will continue to work for party," he said.

On state senior BJP leader KS Eshwarappa's comments that the BJP would not give tickets to Muslims as the minority community did not believe in the party, Yeddyurappa said, "We are not confident of fielding and ensuring victory of a Muslim candidate as of today." However, he added the BJP considers Hindus, Christians and Muslims as children of one mother.

"As soon as we win 22 seats the differences between Congress and JD(S) will reach its peak. They will fight against each other, and there is feeling among many that in such a situation the government will not survive. Let's wait and watch," he said.

Among the people, he said, he could sense anger against the Cong-JDS coalition government in Karnataka and affection towards the BJP.

"If we win 22 seats, infighting between them (the Congress and the JDS) will increase. What stand the disgruntled Congress legislators take will determine the change in the government. We can only wait and watch. There is no question of any operation (lotus)," he added.

Since its formation after the May 2018 assembly polls, the coalition has faced repeated turbulence, with internal dissidence and alleged attempts by the BJP to poach their MLAs to bring down the government.

Yeddyurappa said he visited most of the Lok Sabha constituencies in the state and found that compared to 2014 Lok Sabha polls, "in 2019, the liking towards Prime Minister Narendra Modi has increased".

"Across the country, we will win more than 300 Lok Sabha seats," he said. Yeddyurappa said the alliance between the Congress and JD(S) would benefit the BJP.

On BJP not fielding a candidate in Mandya, Yeddyurappa said Sumalatha Ambareesh, who is an independent, asked for support. "So without fielding a candidate, we have given unconditional support." "We have not pressured her to join the BJP, our only intention is that she should win, and she will win," he said.

On denying ticket to Tejaswini, the widow of former Union minister Ananth Kumar, Yeddyurappa said the party state unit had sent only her name for the Bangalore South seat, but the high command cleared the name of Tejasvi Surya, a youthwing leader.

"We are confident that he will win with a margin of over 2 lakh votes." Yeddyurappa also said former prime minister H D Deve Gowda, veteran Congress leaders MallikarjunKharge and K H Muniyappa will lose in this poll.

"Write it down, a 100 per cent our candidate in Gulbarga Umesh Jadhav, who recently resigned as Congress MLA, will win against Kharge. The situation of Deve Gowda is also same in Tumkur," he said, adding the situation is similar in Kolar, where Muniyappa is a Congress candidate.