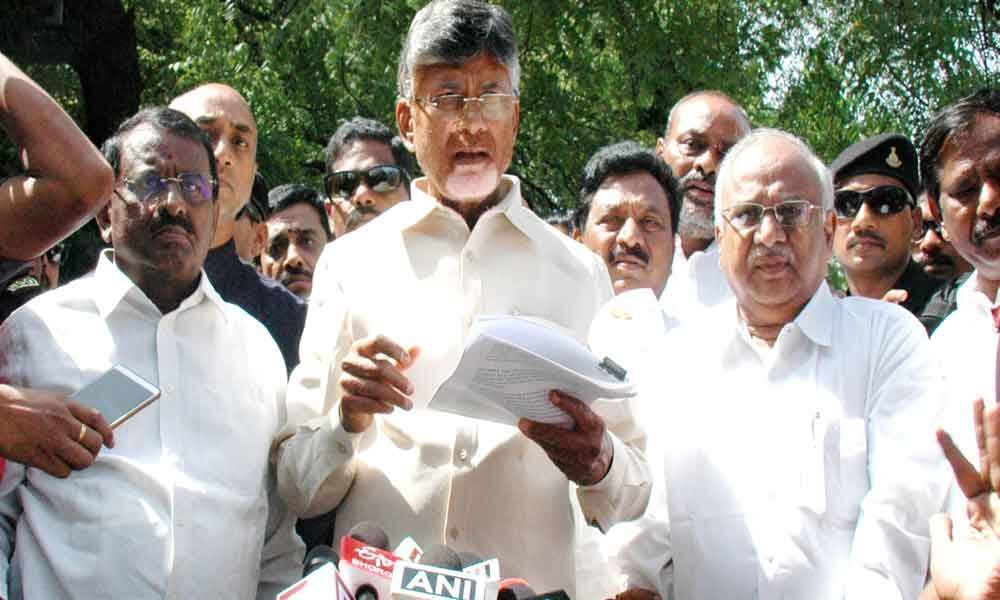 The demand for paper ballot seems to be gaining great support and is likely to become a major issue in the campaign during ongoing general elections across the country.

New Delhi: The demand for paper ballot seems to be gaining great support and is likely to become a major issue in the campaign during ongoing general elections across the country. The failure of the Election Commission to ensure smooth conduct of polls in Andhra Pradesh will be a case study that would be presented across the country by the opposition parties.

They are likely to promise that if voted power, they would amend the act and re-introduce paper ballot system. As a prelude to this, Andhra Pradesh Chief Minister N Chandrababu Naidu on Saturday led a 20-member team of his party men, including MPs and ministers and submitted a 15-page memorandum to the Election Commission of India.

Raising questions on the poll panel's independence and impartiality, Naidu told reporters outside the EC headquarters here that the level-playing field was an essential attribute of democracy -- "now stands disturbed". The EC, he said, acted on behalf of the Narendra Modi and KCR, colluded with "criminals like Y S Jaganmohan Reddy and his co-accused L V Subramanyam," who was appointed as the Chief Secretary in place of an honest officer like Punetha.

Describing the acts of the poll panel as "unfair", Naidu said that the "Election Commission has lost all credibility among the people of the nation" and its image has been dented in their eyes. He alleged that the poll panel observer in the State was having links with Rashtriya Swayamsevak Sangh (RSS).

Accusing the Election Commission of India of denying the citizens their fundamental right to exercise their franchise by using faulty EVMs, delaying repair of faulty EVMs and by prolonging the voting timings abnormally, Naidu reiterated his demand for reintroduction of paper ballot.

Naidu said nearly 21 opposition parties had demanded that at least, 50 per cent of VVPATs must be counted at any cost in the interest of democracy but the EC refused saying that it would take more than six days to count them. He wondered whether it was more tedious than the earlier paper ballot system which took hardly a day to count the votes.

He demanded that the EC should first hold a mock counting of VVPATs before coming to any conclusion. Naidu said it was his duty to fight against the corrupt practices of the EC and he would continue his fight legally too to restore transparency in the electoral process. He said he would continue consulting all Opposition leaders to unite them to protect democracy and bring accountability to the ECI too.

Naidu received a phone call from Farooq Abdullah, Akhilesh Yadav and Deve Gowda who inquired about the manner in which elections were held in Andhra Pradesh. Deve Gowda invited Naidu to campaign in Karnataka. He said he would launch a nationwide struggle against the ECI bias and faulty EVMs.

Naidu said that after consulting all the opposition leaders, they would file a review petition in the Supreme Court seeking counting of VVPATs. They are also likely to file a complaint with Human Rights Commission on the problems faced by the people at polling booths.

The Election Commission in AP not only colluded with the criminals but also transferred key officials at the behest of YSRCP leaders. Democracy was all about giving every citizen an opportunity to participate in electoral system through adult franchise, he said.

He said his primary objective in complaining to the ECI was to bring to its notice the hardships faced by voters who had to stand till the next day morning in AP for their turn to vote and to ensure that such things were not repeated again. He hoped the ECI would act or else, he would have to seek SC intervention, he said.

Earlier, TD leaders, including MPs, ministers and MLAs, accompanying the CM said EVMs did not function properly in hundreds of booths in their constituencies and there were not many technicians to handle them causing abnormal delays testing the patience of the people.