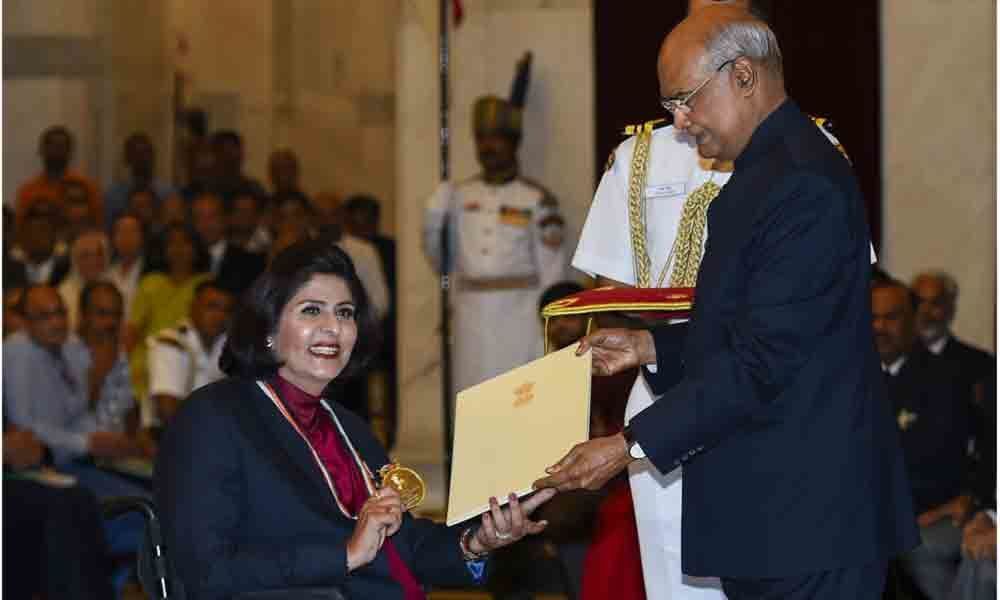 New Delhi (PTI): Paralympic silver-medallist Deepa Malik on Thursday became the first Indian woman para-athlete and the oldest to be conferred the Rajiv Gandhi Khel Ratna award but training commitments kept co-awardee Bajrang Punia away from the ceremony at the Rashtrapati Bhawan here.

Malik, who won a silver medal in the shot put F53 category in the 2016 Rio Paralympics, was joint winner of the top honour with Asian and Commonwealth Games champion Punia, who is in Russia to prepare for the upcoming World Championships in Kazakhstan.

Malik became only the second para-athlete after double Paralympic gold-medallist javelin thrower Devendra Jhajharia, who received the recognition in 2017, to have won the prestigious award.

At 49, she also became the oldest athlete ever to have claimed the honour. "I am very happy. This whole journey has been more about changing the attitude of people towards disability and the hidden potential in people with disability," Malik said.

"I think the award is going to be a huge inspiration to women athletes in disability. It took 70 years for independent India to win a medal by a woman athlete in Paralympics," she added.

Malik became fourth-time lucky as she was ignored for the award for the past three years, leading her to question and criticise the decision. Prominent absentees from the event, apart from Punia, were cricketer Ravindra Jadeja, Asian Games gold-medallist shot-putter Tejinder Pal Singh Toor, silver-winner quartermiler Mohammed Anas and shooter Anjum Moudgil, all of who were picked for the Arjuna award this year.

Jadeja is currently on national duty with the Indian Test team in the Caribbean. Toor, on the other hand, is training in Europe while Anas is competing in the National Inter-State Athletics Championships in Lucknow right now.

"I want to dedicate this award to the seniors who made this possible for me. This award is for the future generation of Indian football. I hope this will act as a catalyst to inspire them," he said. Heptathlete Swapna Barman said winning the Arjuna Award was a dream-come-true moment for her.

"It's a dream-come-true moment for me. I would like to thank the Athletics Federation of India for recommending my name. This award will inspire me to achieve greater things in future," she said.

While the Khel Ratna award carries a prize purse of Rs 7.5 lakh, the Arjuna awardees are given Rs 5 lakh each, along with citations.