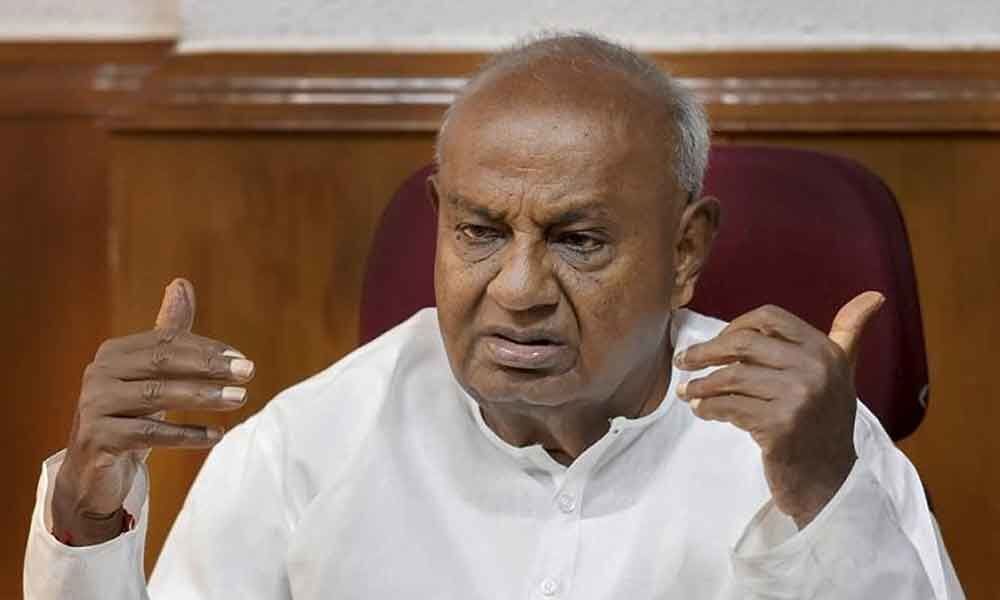 Deve Gowda has supposedly requested top Congress leaders to make Muddahanumegowda to withdraw from the contest.

JD(S) supremo HD Deve Gowda encounters one of his harshest political battles as he filed his nomination papers from the Tumakuru Lok Sabha seat, after renouncing the family supporters of Hassan and Mandya to his grandsons, on Monday.

In the presence of local Congress leader G Parameshwara and deputy chief minister, the 86-year-old submitted his papers as the JDS-Congress nominee. Gowda was asked to choose between Bengaluru North and Tumakuru. To end with, he opted for the Tumakuru Lok Sabha seat and will take on BJP's four-time MP from Tumakuru, G S Basavaraj.

Prevalent insurgence within the Congress over rejection of ticket to sitting MP SP Muddahanumegowda and Deve Gowda's so-called role over denying Tumakuru residents drinking water from Hemavathi have made it a difficult task for the former PM to secure a sixth consecutive term. "Go back" slogans greeted Deve Gowda as soon he descended on Tumakuru.

Defying the polling procedure, Muddahanumegowda and former Madhugiri MLA K N Rajanna also filed nomination papers. Deve Gowda has supposedly requested top Congress leaders to make Muddahanumegowda to withdraw from the contest. Congress leaders will have their task cut out to ensure the withdrawal of rebel candidates. The last date for withdrawal of nomination papers is March 29.