Gowda is fighting on 7 seats, yet dreaming of becoming PM: Yeddyurappa 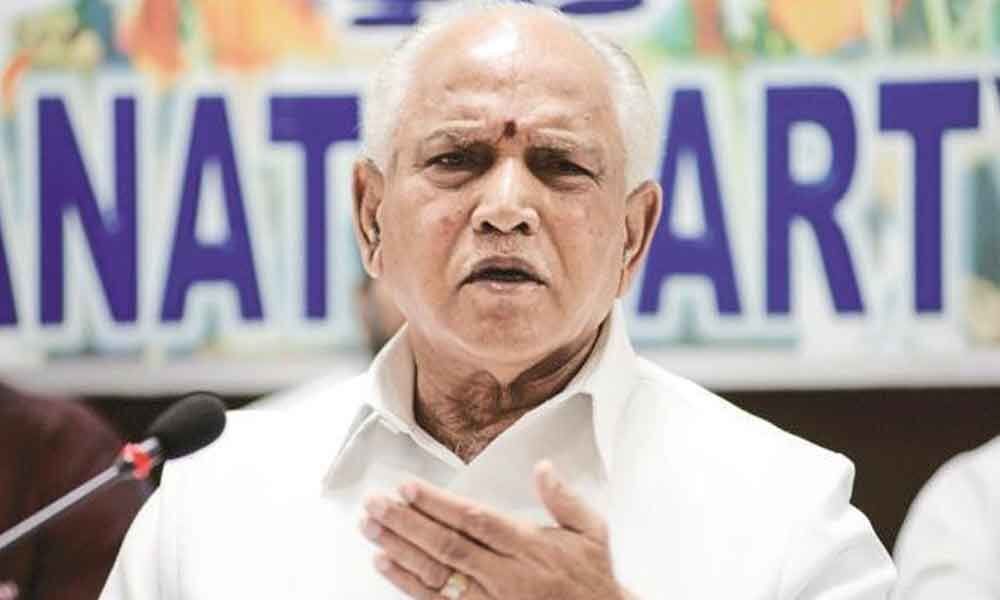 Taking a jibe at former prime minister HD Deve Gowda, BJP leader and former Karnataka chief minister BS Yeddyurappa said that though Gowda’s party is contesting only on a few seats in the state, he is nursing ambitions of becoming the Prime Minister of the country, or at least an advisor to the PM.

Shimoga: Taking a jibe at former prime minister HD Deve Gowda, BJP leader and former Karnataka chief minister BS Yeddyurappa said that though Gowda's party is contesting only on a few seats in the state, he is nursing ambitions of becoming the Prime Minister of the country, or at least an advisor to the PM.

Gowda had said in a recent interview that unlike BJP veteran LK Advani, he is not going to retire from active politics and that if Congress president Rahul Gandhi becomes the Prime Minister of the country, he will be sitting by his side.

Of the 28 parliamentary constituencies in the state, Congress and JD(S) are contesting on 21 and 7 seats, respectively, as per a pre-poll arrangement.

Expressing his confidence of BJP gaining a big victory at the polls, Yeddyurappa said: "Despite all the divisive tactics by the Congress party, BJP emerged as the single largest party in the Assembly elections by winning 104 seats. In this election too we are hundred per cent confident that we will not only win Shimoga Lok Sabha seat with a huge margin but also win more than 22 seats in the state."

Shimoga has become a high profile constituency in the state as sons of two chief ministers are battling it out. Yeddyurappa's son B Y Raghavendra has been campaigning extensively and tells ANI that despite the state machinery being used against the BJP in his constituency, the people are with him. His father is very popular in Shikaripura where they have a modest family home in a congested locality but Raghavendra feels that Modi's popularity is his trump card. The JD (S) nominee Madhu Bangarappa, son of former CM is banking on the Ediga community and his late father's popularity. HD Kumaraswamy has made several emotional appeals to minorities and other communities to break the hold that Yeddyurappa has in central Karnataka.

But the ageing Kannada stalwart Yeddyurappa is confident of adding Karnataka to Modi's kitty, "We are going to win at least 300 seats in the entire country," he added.

On the prospects of JD(S)-Congress alliance getting 'destabilized' in Karnataka if BJP wins the Lok Sabha elections, Yeddyurappa said, "After results, anything may happen," claiming that "over 20 Congress MLAs are not ready to help the Chief Minister, they are not happy with him".

He, however, denied that the allegedly estranged MLAs were in touch with him. "These MLAs have not spoken to me, they have spoken secretly," he said. He probably means that there is a whisper campaign.

Talking about the Veerashaiva-Lingayat issue, Yeddyurappa accused former Congress president Sonia Gandhi of hatching a conspiracy with the local Congress leadership to divide the Lingayat community in the state.

"Congress leader and Home Minister MB Patil had written to the then AICC chief Sonia Gandhi on Veerashaiva-Lingayat issue which exposes the conspiracy hatched by Congress to prevent BJP from coming to power in Karnataka. What is surprising is that Sonia Gandhi is involved in this conspiracy as the letter written by Patil starts with 'as suggested by you', that means she herself has guided state Congress leaders on the issue," he said.

"Being the head of a national party and claiming the legacy of Nehru family, she should not have stooped to such a level because we have high regards for Nehru and his family. Though it is not new for Congress people to involve in such conspiracies," he added.

On Kumaraswamy's alleged claims that he knew about the 'Pulwama terrorist attack' two years back, Yeddyurappa hit back questioning the CM's silence for so long.

"If he knew about the attack two years back, he should have informed it to the police or to the President of India so that such a tragic incident and the death of our more than 40 soldiers could have been prevented," he said. Yeddyurappa is dismissive of the Chief Minister's statements on Pulwama and Balakot, telling ANI that HDK seems mentally unsound.

Refuting the allegations levelled on him by the Congress in the 'Yeddyurappa diary' row wherein he was alleged to have paid Rs 1800 crore to some top BJP leaders, the former CM said that there was no truth in it.

"If there is even a small amount of truth in it, I will retire from politics. Officials and experts have checked my handwriting and signature and have come out openly saying that it was not my signature at all. It was not a diary but only 2-3 loose sheets," he said.

Continuing his tirade against the JD(S)-Congress government in the state, the senior BJP leader said that it has been a complete failure and that the CM has lost his "mental balance". "We are seeking votes on Prime Minister Narendra Modi's 5-year performance. The existing coalition government has miserably failed in Karnataka and the Chief Minister has lost his mental balance and is speaking irresponsibly," he said.

"In Mandya district, Sumalatha is giving a very good fight and she may win the election. The Chief Minister was there only for a week, thereafter he lost his mental balance and is speaking nonsense wherever he has gone after that," said Yeddyurappa.

The BJP has fielded candidates in all constituencies except in Mandya where it has extended support to independent candidate Sumalatha, wife of late actor-turned-politician Ambareesh. Sensing difficulties for his son Nikhil, who is the coalition candidate, Kumaraswamy had been campaigning in Mandya for the past few days.

When asked about his statements on Balakot, Yeddyurappa said that he has been misquoted by some media outlets. "I didn't say that Balakot air strike will help us to win 22 seats, I was misquoted by the media. The credit will go to the military," he said.