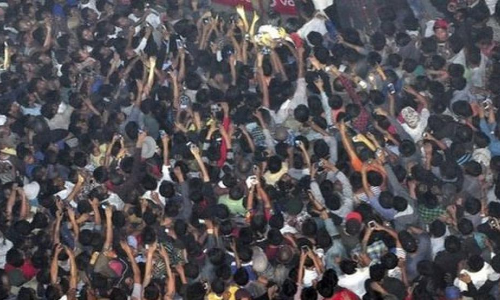 Lynching is killing someone without a trial Herd mentality is dangerous for the society, where everyone has one view The singularity of views is really dangerous for society and the mentality not to question anything is likely to lead to the destruction of any culture or society

Lynching is killing someone without a trial. Herd mentality is dangerous for the society, where everyone has one view. The singularity of views is really dangerous for society and the mentality not to question anything is likely to lead to the destruction of any culture or society.

Last year, many parts of our country witnessed mob violence particularly against Muslims based on rumours that people possessed cow meat or were smuggling cows.

Thousands of people even took to the streets in major cities across the country including Delhi, Bangalore, Mumbai, Chennai and Kolkata to protest against the random violence.

In the past few months, rumours have spread like wildfire on messaging platforms such as WhatsApp regarding child-kidnapping gangs and the children being killed for organ harvesting, leading to mob lynchings in many parts of India.

One of the first cases of such mob attacks was reported from Obanapalle village on the outskirts of Chittoor district in Andhra Pradesh. The villagers caught hold of a man in April and thrashed him in suspicion that he was a child trafficker. He was handed over to the police, who realised that the person was mentally unstable and let off. However, the very next day he was attacked by a group and killed.

Following this, the rumours of a child-lifting gang targeting children started spreading increasing the workload on police as more stories surfaced of gangs attacking people. A man was arrested in May in Ongole for spreading false news regarding a gang had slit the throat of a person.

Later, WhatsApp messages were circulated about 200 criminals from North India enter Tamil Nadu to abduct children. This rumour claimed three lives and resulted in several mob attacks. The victims included a mentally deranged man, a ‘Hindi speaking’ man and a homeless beggar were hacked to death on the suspicion of them being the kidnappers. All the three incidents took place within a span of two weeks.

While the police arrested the culprits for spreading the false news on child kidnapping, the efforts to curb rumours still remained futile as similar incidents were reported in Odisha, Telangana, Karnataka, Tripura and West Bengal as well. The victims turned out to be mostly outsiders, beggars, migrant labourers or mentally challenged persons.

After the rumours spread on WhatsApp, at least 31 people have been lynched in more than 10 states with at least 14 lives lost in less than three months.

Whether there is a malicious agenda behind the child abduction rumours being spread is still not clear but they keep resurfacing in different parts of the country time and again.

The latest incidents include five beggars being attacked and injured by an angry mob in Maharashtra’s Dhule and two others in Tamil Nadu after videos circulated on WhatsApp warning about the presence of organ harvesters. In Assam, two young men were slaughtered by a group after a man, Alphajoz Timung, instigated people into believing that the two were child lifters, instead was found to be a case of settling scores.

An engineer was beaten to death and three others were severely injured in Karnataka last week in a series of mob attacks fueled by fake social media messages. 25 people were arrested by the police.

However, the cause is yet a question mark. The explosion in smartphone use is widely regarded as a major cause of the problem with nearly one in three Indians owning a smartphone, the revolution has changed the way people access information. In addition to this, the opening up of global web services and increasingly accessible internet services worldwide has become the basis of rumours circulated on social media.

Earlier this month, Information Technology Minister Ravi Shankar Prasad said WhatsApp is reaping benefits out of India operations (WhatsApp has more than 200 million users in India) and thereby must focus on the security-related aspects of people of India.

In response, WhatsApp published full-page advertisements in leading newspapers suggesting users on how to identify false information. They also are starting an education campaign in India on how to spot fake news and rumours. Also, a new feature has been launched on WhatsApp which will label forwarded messages as such, informing receivers that the sender is not the creator of the message.

India, too, is gearing up to counter this growing threat as the Supreme Court today condemned lynching incidents and recommended to Parliament to enact a separate law to punish offenders who participate in the lynching.

The Court said that the mob violence has to be curbed and cannot be allowed to become a new norm asserting that no citizen can take the law into their hands.

Whether these measures are effective enough is to be seen.