I share a 'divine connection' with Mathura: Hema Malini 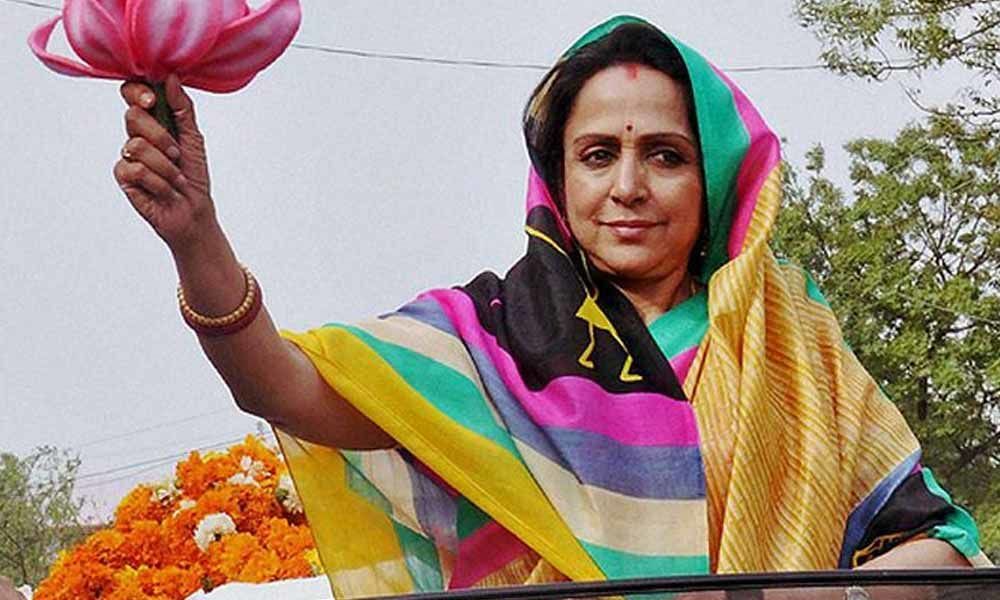 The BJP MP said she also has to fulfil her professional commitments as an actor and a danseuse.

Mathura: Dubbed an "outsider" by the Opposition, BJP MP Hema Malini has said she has a "divine connection" with Mathura, the city of Lord Krishna, and has no intention of becoming a minister. The actor-turned-politician, who has been fielded once again by the BJP from the Mathura constituency, filed her nomination papers for the upcoming Lok Sabha elections earlier this week.

The 'mahagathbandhan' (grand alliance) of Samajwadi Party, Bahujan Samaj Party and Rashtriya Lok Dal has said that Mathura will witness an "outsider vs Brijwasi" battle as Hema Malini lives in Mumbai. "Yes, I have a house in Mumbai. What is the problem with that? I have a house here also and I am a Virndavanwasi," Hema Malini told PTI in an exclusive interview. "I am so involved with the city and I feel some divine connection with this city. I have been playing Radha and Meera throughout my life and I was in a temple only when my candidature was announced," she said. The BJP MP said she also has to fulfil her professional commitments as an actor and a danseuse. "In the last five years I have come here more than 250 times.

People should understand that I am not just an MP and I have to use my talent as an actor and a danseuse as well. There is no need for me to be here 24 hours. I come and get things done in 10 days," Hema Malini said. "I know that I can't satisfy the entire city, which is so huge, but I have done my work with utmost sincerity and will continue to do so in future as well," she said. Hema Malini said it pained her when people questioned her work in the last five years. "I really feel hurt when someone asks 'apne kya kaam kiya?' (what work did you do). The first two years were difficult as I could not communicate (with the people). But in the last two years I was able to get things done with the support of the Centre and the state government," she said. "Many projects have been sanctioned under Brij Teerth Vikas Parishad and I am working to revive the old heritage of Brij Mandal," she said, adding that she needed another five years for that.

"This is why I have decided to stay back," she said. Despite being a star campaigner of the ruling BJP, the BJP MP said she was not eyeing a ministerial berth at the Centre and wants to focus on Mathura only. "I am not a hardcore politician and I want to limit myself to Mathura only. I am asked many times if I want to become a minister and it sounds so strange. Being a minister is a full-time responsibility," Hema Malini said. "Women ministers in Modiji's cabinet have done extremely well and I am proud of them, but this is not a competition," she said. Rejecting speculation about differences in the BJP's local unit, Hema Malini said everyone is working together to ensure a second term for Prime Minister Narendra Modi.

"There is no infighting and my party workers have a lot of love and respect for me. They are supporting me in a big way and I am 100 per cent sure of winning with a bigger margin this time," she said. Asked about her announcement, which she made after filing her nomination papers, that this election will be her last, Hema Malini said as of now, she was focussing on making the most of the next five years. "We will talk about the future after five years. Let's see how much energy I will have left by then," she said. Asked about the possibility of her family members campaigning for her, she said, "I can't say yet whether Dharamji will come. I wanted Esha to come but she is expecting a baby," she said. Hema Malini had defeated RLD's sitting MP Jayant Chaudhary in 2014 by a huge margin of 3,30,743 votes in 2014. This year, she is pitted against RLD's Kunwar Narendra Singh. Voting will be held in Mathura in the second round of seven-phase Lok Sabha polls on April 18. Results will be announced on May 23.