In Amethi, it's no cakewalk for Rahul Gandhi 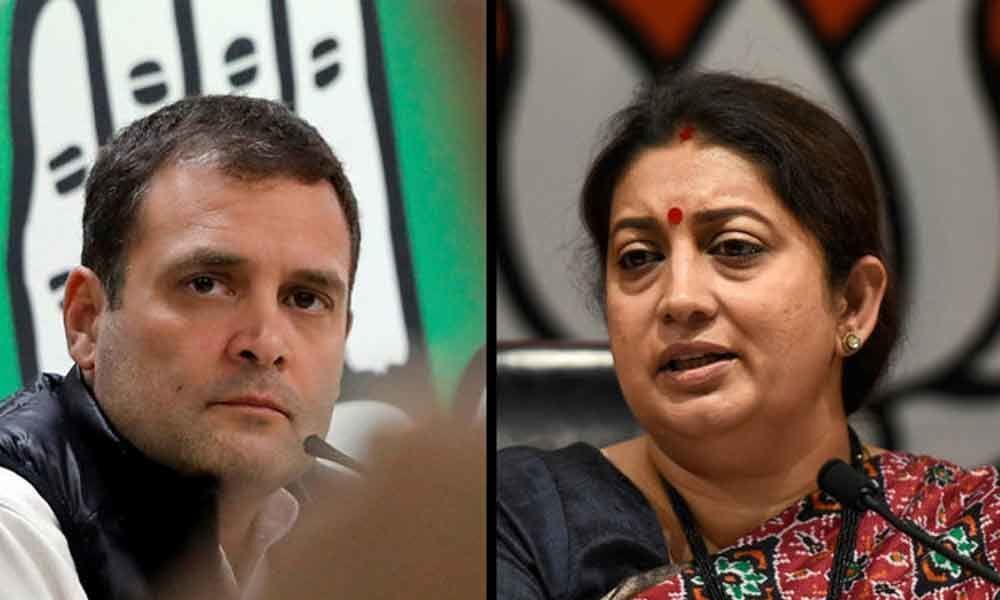 This tricky question is cropping up in everyone's mind these days. There are valid reasons for it. He won 2014 elections from this seat with a margin of 1.07 lakh votes against Smriti Zubin Irani, now Union Minister, of BJP.

By Gandhi family standards, it was not a great victory. Barring Sanjay Gandhi, Rahul's uncle, in 1980 when he won with a margin of 1.28 lakh, the victory margins of Gandhi family members never slipped below two lakh.

He will be in trouble if his vote share falls further in this election.

Secondly, he sprang a surprise by contesting from a second seat this time – Wayanad, a Muslim-dominated seat in Kerala.

This raised a key question. Why did he go to Wayanad if he did not sense trouble here?

There are other reasons as well. BJP is on a stronger-footing in Amethi now than it was in 2014.

In 2017 UP Assembly elections, it won four Assembly seats that fall under Amethi Lok Sabha – Amethi, Salon, Jagdishpur and Tiloi. The fifth one, Gauriganj, went to Samajwadi Party (SP).

That means Congress doesn't have a single MLA on its side. And it stood second only in three seats. Further, BJP came to power in UP as well.

The other factor is Smriti Irani, who despite losing 2014 battle, continued her focus on the high-profile constituency and with her (BJP) government at the Centre, managed to get some developmental projects including roads, grounded.

This has created some positive vibes about her among Amethi people, especially women, who have not seen much development in their areas for quite some time.

Added to that, the welfare schemes such as free houses, Kisan Samman Yojana and Ayushman Bharat announced by the Central government also came in handy for her.

For Rahul Gandhi to win, he has to clear all these hurdles and many more.

The only weapon he has on his side is his chance of becoming Prime Minister if non-BJP government is formed at the Centre post May 23 when votes will be counted, and the ever-lasting goodwill among people here about the Nehru-Gandhi family.

Further, Bhajun Samaj Party (BSP) and Dr Kumar Vishwas of AAP together secured over 80,000 votes in the 2014 elections. Both are not in the fray now.

But if one goes by the pros and cons and the mood of people in this constituency, it will not be a cakewalk for the Nehru-Gandhi scion when voting take places in Amethi on May 6 (5th phase).

Rajesh Yadav of Gauriganj, a private employee, feels that it is going to be a tough fight. "Both the candidates are waging a tough battle.

It will be a close call. The result can go either way. But defeating Rahul Gandhi is not easy as people have a strong bonding with the Gandhi family," he maintained.

He, however, rued lack of development in Amethi constituency. "Where is the development? We don't even have a bus stand here in Gauriganj," he pointed out.

Pandey, a textile trader at Jamo village near Jagdhispur, also says chances are fifty-fifty. "I have seen many elections here. But I have not come across such a close-fight," he revealed.

Harivamshu Misra, a shopkeeper here, said that BJP was leaving no stone unturned to defeat Rahul this time.

"More than 250 VIP cars are parked at BJP office in Gauriganj every day, blocking the traffic flow.

Of course, all these VIPs disappear the moment elections are over. But it's an indication how serious BJP is. It is a tough fight for Rahul," he said.

However, in Amethi town and the assembly constituency of the same name, Gandhi scion seems to have good support base.

Despite visible lack of development, people are ready to throw their weight behind the three-time MP.

"Amethi is Rahul Gandhi's home turf. People will vote for him whether he will do well or not.

Moreover, (Gandhi) family will be in trouble if he doesn't win this time. That is the line of the thinking among people.

Support denahi padega," Rahul Singh, a security guard in Amethi, reasoned. According to him, many people are not ready to ditch the family at this key juncture.

If this comes true, it is likely that there will be some sympathy for Rahul who is facing his first election after becoming party president.

Santhosh Singh of Bhavaninagar village in Tiloi assembly constituency said the Congress president would win with a margin of over 2 lakh.

"In rural areas, people are solidly behind Congress. Moreover, BSP-SP combine is not contesting here.